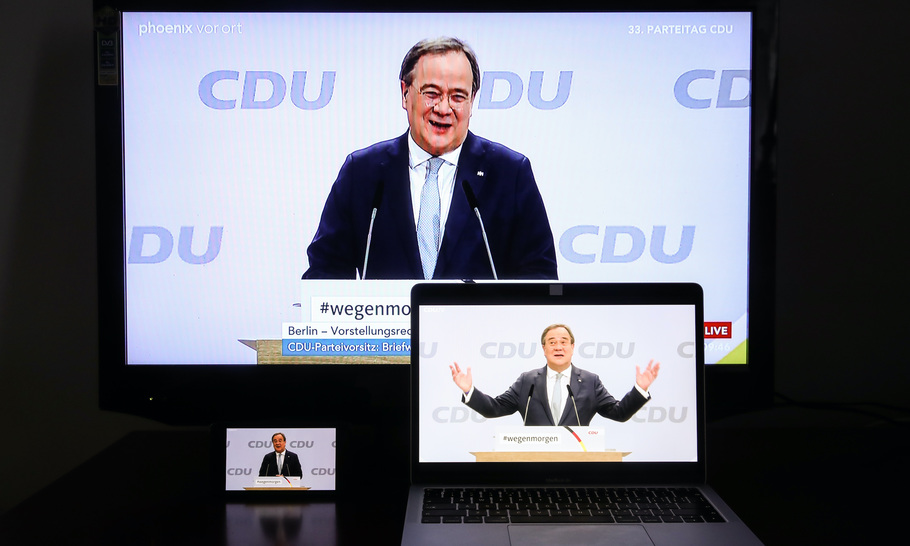 Compared to the obsessive interest shown by the British media in American politics, events in the rest of Europe command little attention unless they directly impinge on us. And so the weekend election of Angela Merkel’s successor passed almost unnoticed — just as her own emergence did nearly two decades ago.

Admittedly, the new chairman of the Christian Democratic Union (CDU) will not necessarily be the next German Chancellor: in the Federal Republic, the roles of party leader and head of government can be, and sometimes, are held by different politicians. Mrs Merkel herself renounced her party leadership three years ago; this is the second time the CDU has tried to fill the vacancy. Reports of her political demise have proved to be exaggerated.

Still, the choice by CDU delegates of Armin Laschet matters, not just for Germany but for the whole of Europe — which, incidentally, includes the UK. Whether or not he becomes the next Chancellor after September’s election, he will help to shape the policies of our most important neighbour, not to mention the EU. And so we should scrutinise Laschet’s foreign policy positions with particular care — even if domestic factors will have played a much larger role in his election. The headlines that portray Laschet as a “moderate” and a “liberal”, very much in the Merkel mould, capture only part of the picture. For in one important respect, he is by no means her disciple.

Whereas Merkel, an East German who grew up under the Soviet yoke, has an instinctive suspicion of Vladimir Putin, Laschet seems inclined to trust the Russian President even when the evidence of his culpability is overwhelming. For example, after the Salisbury poisoning, he responded to the British request for Western sanctions by tweeting: “If you force almost all Nato countries to show solidarity, shouldn’t you have reliable evidence?” Given the devastating detail with which British investigators built the case that this chemical weapons attack must have been authorised at the highest level (i.e. by Putin himself), this expression of scepticism is deeply disturbing.

So, too are Laschet’s series of tweets, over several years, in support of Assad, Russia’s genocidal Syrian ally. He is also among the most powerful supporters in Germany of closer ties with Xi Jinping’s China. This penchant for oriental despotism is of a piece with his advocacy of commercial projects such as NordStream 2 and Huawei, which tend to make Europe more dependent on Moscow and Beijing. He is at least consistent: jobs in Germany come before human rights elsewhere.

It may be argued that the differences between Laschet and Merkel are more cosmetic than real. Regardless of the Chancellor’s gestures — offering asylum to dissidents such as Alexei Navalny or Ai Weiwei, for example — under her Germany has tended to align itself with business interests that favour more trade with authoritarian regimes, rather than allies (especially the US and the UK) who often see them rather as strategic threats. While the Biden administration’s promised overtures to the Iranian ayatollahs are eagerly awaited in Europe, if the new President continues Trump’s tough line on Chinese aggression, he will find the EU’s new trade deal with China has no bigger supporter than Germany. In short: any US-led attempt to build a common Western position to resist the resurgence of anti-democratic forces will be met in Berlin with equivocation at best. There, Realpolitik still rules.

Now that he has ascended to the national and perhaps international stage, Laschet deserves a chance to modify his attitudes. His English is adequate but he speaks fluent French; Emmanuel Macron has already befriended him. It is difficult to escape the impression of mediocrity, however. His defeated rivals, Norbert Röttgen and Friedrich Merz, are more experienced and less provincial. His most important backer, apart from Mrs Merkel herself, is Jens Spahn, the suave and successful Health Minister. Both Spahn and Markus Söder — leader of the CDU’s Bavarian sister party, the CSU — are more charismatic and more popular than Laschet. If the CDU looks vulnerable in the polls by the spring, it is likely to choose either Spahn or Söder as its candidate for Chancellor, leaving Laschet with a merely organisational role. If he doesn’t want to take a back seat in the election, the new party leader only has a few weeks to make his mark. Laschet is sympathetic to immigration and Islam, so he is badly placed to woo back voters from the far-right Alternative for Germany. Nor does this Rhinelander appeal to East Germans. But we can expect some keynote speeches with a mildly populist flavour — more pandemic subsidies for families and businesses, more environmental protection, more European integration — designed to consolidate the centre- ground from which Merkel has dominated German politics for a generation.

At 59, Armin Laschet is hardly an unknown quantity. Even if the media ignore him, however, Boris Johnson would be wise to schedule a video call to sound him out — preferably with Jens Spahn, whose English is excellent, in the room. Relations with Germany have seldom been frostier in the last half century, but there is an opportunity to rebuild what Goethe might have called our Wahlverwandtschaft (elective affinity) on the basis of mutual interests and cultural connections. Britons and Germans still need one another, perhaps more than ever before. Whether Boris likes Armin or not, they are both former journalists who have done well for themselves. The least these two old hacks can do is to raise a virtual glass of hock to Anglo-German amity.