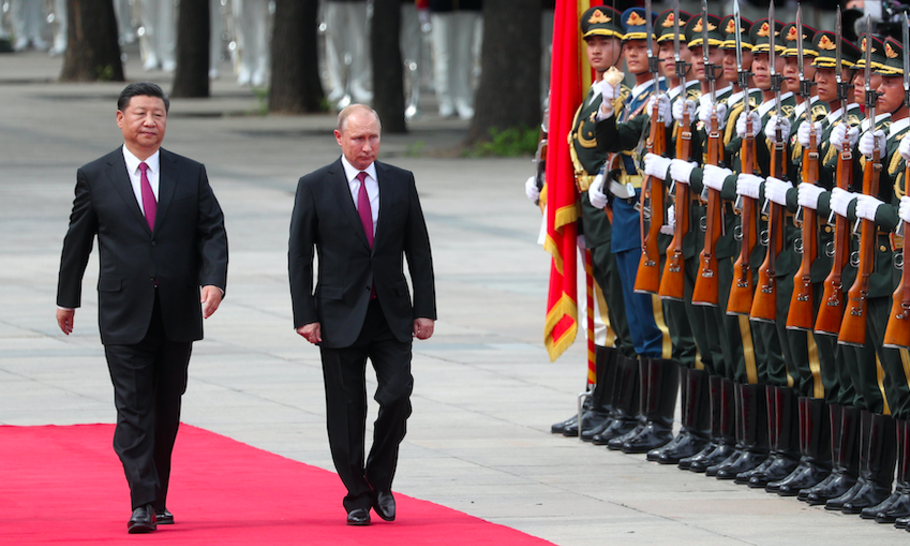 Presidents Biden and Putin will hold a mini-summit by video link tomorrow, amid alarming reports of the Russian military build-up along the Ukrainian border. The Kremlin’s threat of an invasion may be real enough, but the likelihood is that it is a bluff — or rather, a protection racket. Once he has extracted concessions from Nato, Putin may stand down the 175,000 troops he has amassed within striking distance of Kyiv. He knows that even the Russians are wise not to take on General Winter, especially against well-equipped Ukrainians defending their homeland.

Joe Biden has no choice but to negotiate with this puffed-up autocrat, who pretends to be a latter-day Czar of all the Russias, but who actually bears less resemblance to Ivan the Terrible or Peter the Great than to the KGB thug he always was. Putin is desperate to remind the world that China is not the only great power capable of throwing its weight about. Although it is true that Russia is still the only nuclear rival to the United States, under Xi Jinping the Chinese military is rapidly overtaking both, unconstrained by Cold War arms limitation treaties.

In other crucial fields of military competition, such as hypersonic missile technology, Beijing may already be ahead of the West. The Russian precision missile that destroyed a satellite last month, creating a cloud of deadly debris in the region where the International Space Station orbits, was an attempt to prove that for Moscow, the space race and the arms race are still indistinguishable.

The People’s Republic, meanwhile, continues to menace Taiwan, which, like Ukraine, is formally outside the American-led network of military alliances. But Shinzo Abe, the still-influential former Prime Minister of Japan, spoke truth to power last week when he warned that Japan could not stand by if China invaded Taiwan. Not only would such a military gamble be “economic suicide”, but Beijing’s territorial claims on Japanese islands, potentially including Okinawa, mean that the seizure of Taiwan would constitute a casus belli for Tokyo. The Chinese reacted furiously, summoning the Japanese Ambassador for a dressing-down, but the message to Xi is clear: the use of force in the South China Sea risks a regional conflagration, if not indeed a global one. For the autocracies in Moscow and Beijing, both Taiwan and Ukraine are on the wrong side of the democracies’ red lines.

The greater danger to the West, however, may come not from direct military or diplomatic blackmail, but from subtler forms of pressure exerted by the authoritarian regimes. China in particular has become adept at using its economic muscle to silence criticism in the free world. We have just witnessed disturbing examples of the pre-emptive cringe in two key areas, business and sport.

Last month one of the most powerful men in the United States felt obliged to kow-tow even before Big Brother in Beijing had menaced him. Jamie Dimon, the billionaire CEO of JP Morgan, the world’s biggest bank, recycled a gag before an audience in Boston. “I was just in Hong Kong and I made a joke that the Communist Party is celebrating its hundredth year. So is JP Morgan. I’d make a bet we last longer.” Evidently aware that the People’s Republic is a surveillance society, the banker added: “I can’t say that in China. But they are probably listening anyway.”

It seems, however, that a swashbuckling master of the universe cannot say such things in Boston either. Within 24 hours Dimon had issued not one but two apologies, presumably because the first was not deemed grovelling enough. The man who supposedly bestrides Wall Street like a colossus was forced to engage in an exercise in Maoist-style self-criticism: “I truly regret my recent comment because it’s never right to joke about or denigrate any group of people, whether it is a country, its leadership, or any part of a society and culture.”

In Beijing, the Foreign Ministry noted that Dimon had “sincerely reflected” and expressed “the right attitude”. The matter was closed without any need to retaliate against JP Morgan’s assets or interests. It is safe to assume that no Western business leader will ever again risk a joke at the expense of the Chinese Communist Party. That party, let it not be forgotten, was and is responsible for the murder, torture and incarceration of tens of millions of people. For such an organisation to be above criticism, not merely in China but even in America, is more Orwellian than the author of Nineteen Eighty-Four could have imagined.

The second example of the pre-emptive kow-tow is the reaction to the notorious case of Peng Shuai, China’s female tennis star, who has been “disappeared” after she protested online against a senior party official, Zhang Guali, who had forced her to have sex with him. After an apology was issued in Peng Shuai’s name and she was filmed speaking remotely to the President of the International Olympic Committee, Thomas Bach, the IOC claimed that she was “safe and well”. Yet, as Dominic Lawson pointed out in yesterday’s Sunday Times (behind a paywall), Zhang, then a vice-premier, was the Chinese negotiator with the IOC on the 2022 Winter Olympics, filmed shaking hands with Bach. Evidently saving the games matters far more to the IOC than the fate of one Chinese sportswoman.

Even worse from a British perspective is the attitude of the former athlete and politician Sebastian Coe, a senior member of the IOC and favourite to succeed Bach when the latter retires in 2025. Lord Coe told the BBC that the Peng Shuai affair should not affect China’s Olympic role because any protest would be a “meaningless gesture”. Asked to compare the 2022 Winter Games with the 1936 Berlin Olympics, Coe claimed that the Nazi-run event had proved that sport can be a “powerful driver of integration and change”. Jesse Owens’s triumph at Berlin proved nothing of the kind, of course — the Nazis banned Jewish athletes, nor were they spared in the Holocaust. But in any case the eagerness of Britain’s leading sports official to exonerate the Chinese leaves a bad taste in the mouth.

We must expect to see plenty more pre-emptive cringing by the great and good on both sides of the Atlantic. The answer to military blackmail may be terrifying but we know what to do: deter the Russians and Chinese, even if that means calling their bluff. Dealing with economic and cultural coercion is harder. But if we concede that Putin, Xi and their cronies are untouchable and that anyone who dares to ridicule them must kow-tow, then we concede too much. The free world must not play by the rules laid down by tyrants.