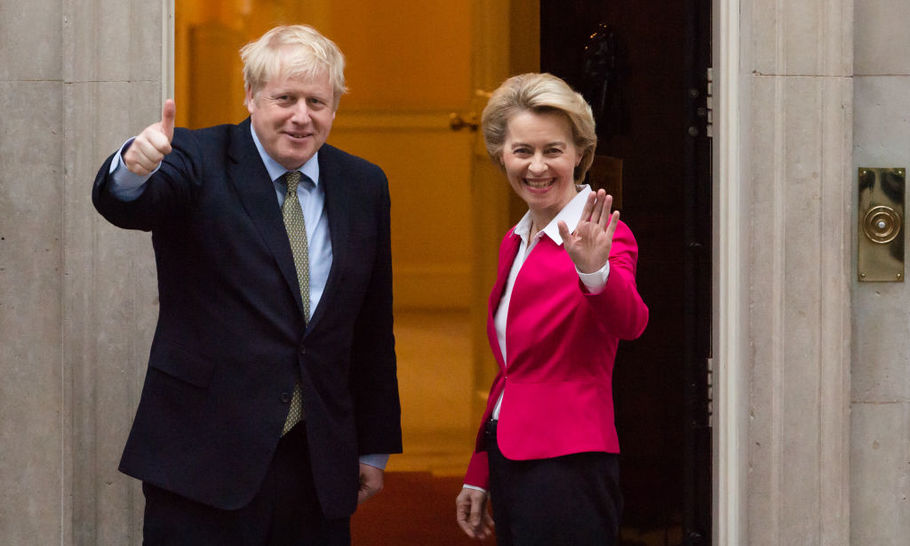 For the first time this week, Britain got full sight of the woman who will face Boris Johnson in the next chapter of the Brexit saga. Ursula von der Leyen, the new President of the EU Commission, has the smile of a petite blonde Phoebe Waller-Bridge, but the steely determination of Margaret Thatcher in her most certain moments.

Both were on display at the London School of Economics, as she laid down the law to Brexiteers, telling them to give up all hope of a cake-and-eat-it Brexit. She later paid a visit to Downing Street to reinforce the message to our Brexiteer-in-Chief.

If Britain wants to keep anything like current access to the EU single market, then von der Leyen said en clair that the UK would have to respect the four freedoms of movement. Such access is essential for the likes of Nissan, farmers and above all the City of London, which needs the 350,000 EU passports granted at Brussels’ entire discretion to financial services – banks, investment fund, clearing houses, insurance firms and hedge funds.

Freedom of movement of capital, goods and services are more than acceptable for Britain, but as we know the whole Brexit saga has turned on freedom of movement. That fourth freedom has been branded as unacceptable, uncontrolled immigration by opponents of Europe over the last two decades.

There is an alternative for the UK, which is to change internal labour market rules to manage and control arrivals from Europe. Indeed, firms could also pay enough to attract British workers rather than those from poorer EU countries.

The issue that will now arise is whether the British government wants to launch an all-out-war with the European Commission — not to mention governments like that of Poland, which is very sensitive to any suggestion that Poles might be discriminated against by Britain. Or will Boris Johnson push the issue of freedom of movement onto the smallest ring with the lowest flame on the back burner?

The line from the Brexit camp, that Europe needs Britain more than we need the EU market, now appears to have little support. One option for Johnson is to make a huge song and dance out of the three-part Withdrawal Agreement so that he can declare, urbi et orbi, that Brexit has been done — completely consummated when the UK ceases to be a signatory member on January 31. All the rest might be what General de Gaulle used to call l’intendance – logistics, catering, regulations — not the big-picture political leadership.

When asked about the UK negotiating trade deals with other countries, Mrs von der Leyen called on Michel Barnier to stand up. He got a huge cheer from the LSE audience when his lanky frame was found to be in the front row, in attendance on the new Commission president.

Barnier gently pointed out that, thanks to its EU membership, the UK currently has more than 600 free trade agreements covering various sectors with non-EU countries. Renegotiating all of those would take time, as new demands and priorities arise which make a simple cut and paste operation impossible. In her speech and in questions to journalists and LSE alumni, Mrs von der Leyen repeated over and over again that it was not realistic to expect a total comprehensive trade deal in the remaining months of 2020.

She schmoozed the audience with a description of her year at the LSE as a 20 year old. London of the 1980s was an eye-opener for the young student from a strict Lutheran family, born in Brussels and brought up in Hanover. “I looked at this wonderful multi-cultural city with people mixing easily. I spent more time in Soho than in the Senate House Library and began learning that extraordinary British sense of humour.”

She has family in London and two of her seven children now attend the LSE. She name-checked Roy Jenkins and Lord Cockfield, the father of the single market as she called him. She bowed before Winston Churchill as a founding father of the idea of European union with his “United States of Europe” speech in Zürich in 1946. Interestingly, this passionate federalist and former German defence minister insisted that the EU “will never be a military alliance”. The European Defence Union, she said, is “complementary to Nato” — not a replacement for it.

For Mrs von der Leyen, Brexit is “done and dusted”. Now it is over to Boris Johnson to decide if he wants to continue the Brexit war with Europe, or whether it’s time to draw stumps. He has the opportunity to keep the British economy and people fully plugged in to Europe, while having absolute sovereignty as and when needed, once we lose the obligations of Treaty membership at the end of this month.

I have been a watcher of EU bigwigs for many decades and this was by far the most friendly, polished, love-Britain-to-death performance that I can ever recall from a major European leader. Now it is up to Boris Johnson to respond calmly and in British interests during his premiership.