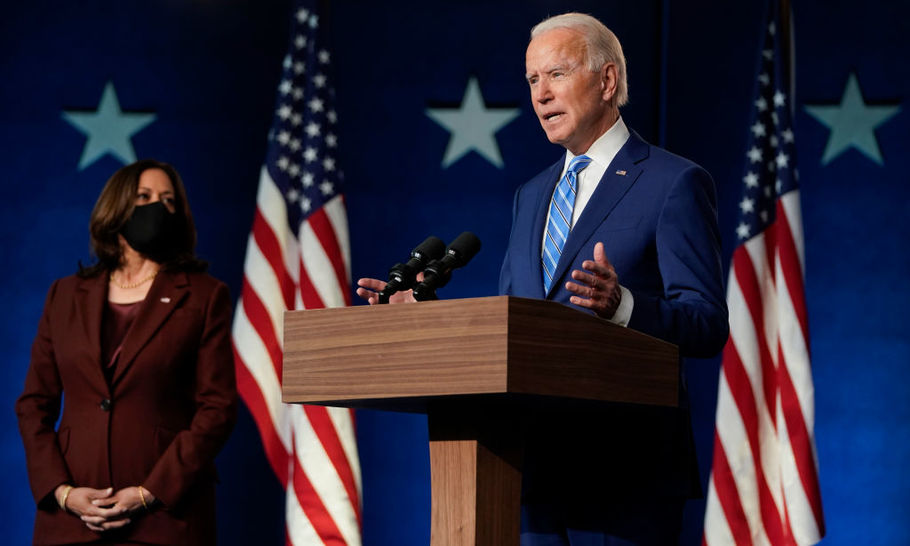 The good old boy made it — by a whisker. At the time of writing, Joe Biden was still six short of the 270 electoral college votes he needs to capture the White House. But even if he fails to win his hotly contested home state, the Commonwealth of Pennsylvania, he looks certain to take Nevada. And so it is only a matter of time before the former Vice President is declared the next President of the United States of America.

Donald Trump has done far better than the media, the pollsters and even his own supporters dared to expect. In the popular vote — the largest turnout in American history, despite the pandemic — the President is only just behind his opponent. He gained votes in every category: women and people of colour, young and old, rich and poor. But it was not enough. This column predicted a landslide; that did not happen. Even so, Trump has lost, fair and square.

He won’t go quietly. His wild words on election night, when he saw his lead in swing states ebb away as mail-in votes were counted, will come back to haunt him. The man whose worst insult is “loser” was never going to be a good one. But his inability to concede with a good grace will leave a lasting negative impression because it is of a piece with his entire presidency. It is one thing to be a fighter — that he certainly is — but another to cast doubt on the entire political system. That is to play into the hands of those who hate America, who are also the enemies of democracy. Trump is entitled to take his fight to the Supreme Court, but then he must abide by their verdict. He should have a care for the office he still holds for another two months.

Biden, by contrast, was statesmanlike, humble and dignified in the speech he made from Delaware on Wednesday night. He did not claim to have won, merely that he was on course to do so. He promised to govern in the name of all the people, to reach out to those who had voted against him, to heal the wounds and end the enmities that have divided Americans so bitterly. He did what was expected of him and he did it well.

The fact that the Democrats failed to take the Senate and even lost seats in the House of Representatives suggests that Biden will have no choice but to govern in a bipartisan manner. He will have an unanswerable argument to put to his radicals when they demand revolutionary change: it will never get through Congress. The voters have, in effect, ensured that the checks and balances envisaged in the constitution will come into play if the Democrats do not play by the rules. Never mind that the incumbent may have tried to bend those rules. Even with all his charisma and chutzpah, Trump will leave the institutional framework much as he found it. Biden has neither charisma nor chutzpah. Still less does he have a mandate to meddle with, for example, the size of the Supreme Court or the electoral college. As a probable one-term President, Biden would be wise to leave the system well alone.

Even if he changes very little, in fact, the President-elect will have his hands full dealing with the pandemic, the economy and the legacy of Trump’s foreign policy. We already know roughly what to expect. On Covid-19, Biden will break with his predecessor’s tendency to play down the crisis. We can also expect an even bigger stimulus package to preserve jobs and boost business. Tax cuts will not be reversed, but new taxes on technology companies and others who have done well out of coronavirus are likely.

Abroad, Biden will seek to rebuild US prestige and influence, but he may prove to have more in common with Trump than friends and foes anticipate. Protectionism has been legitimised by the pandemic and it is here to stay. So is the focus on containing China, Russia and Iran. Europe may be treated more politely, but the underlying message will be the same: the party’s over. Israel will miss Trump but will be able to live with Biden; so will the Arabs.

The most striking changes will be on climate change and migration, which are two sides of the same coin. Not that the US southern border will suddenly be thrown open: the fact that Trump gained ground among Hispanic voters suggests that a tough approach towards illegal Latino immigration is quite popular among those who play by the rules. But Biden has an open mind about how to tackle both the causes and consequences of a warming planet. He will want to be seen as a global leader, not an isolationist. That does not mean he will necessarily rejoin the Paris process except on his own terms. Trump has ensured that the days when China could hold the West to ransom on climate change while shamelessly trashing the environment are over.

When Biden made his speech last night, his running mate stood silently by his side. Unlike him, Kamala Harris kept her mask on and her mouth shut. Once they take office, it won’t be like that at all. We can expect the Vice President elect to play a much bigger role in the administration than her predecessor, Mike Pence. She has her own, more liberal and more radical, agenda and she will quietly advance it whenever she sees an opening.

Yet Kamala Harris has an essential task to perform for the man who picked her. She must restore law and order to urban America. The reason why the Biden-Harris ticket has won is that a significant section of suburban voters have abandoned Trump. He was too divisive, too vulgar and too illiberal for them. But American suburbia is reformist, not revolutionary. High on their list of priorities is an end to the violence that has marred too many “mainly peaceful” protests this year. Biden and Harris have been equivocal about those who have, in effect, sought to coerce the country by the threat of riot and arson. The new administration must tell the far-Left to call a halt to the protests. If he fails to do so, Biden will suffer the fate of his fellow Democrat Lyndon Baines Johnson, who was fatally damaged by his inability to restore law and order to the streets. LBJ did not run for a second term. Biden may not plan to do so anyway, but in that case Harris surely will. As Biden’s likely successor, she has the most to gain by regaining the support of the police — a task for which she is well equipped by her experience as a law officer in California.

The dust has yet to settle on the electoral battlefield, but attention will soon shift to the next chapter. The shape of things to come is already emerging. Trump has done well enough to be a future kingmaker, but he can no longer be king. He will continue to contest his legacy, but he will soon be history. This is no longer Trump’s America. The wagon train has moved on.