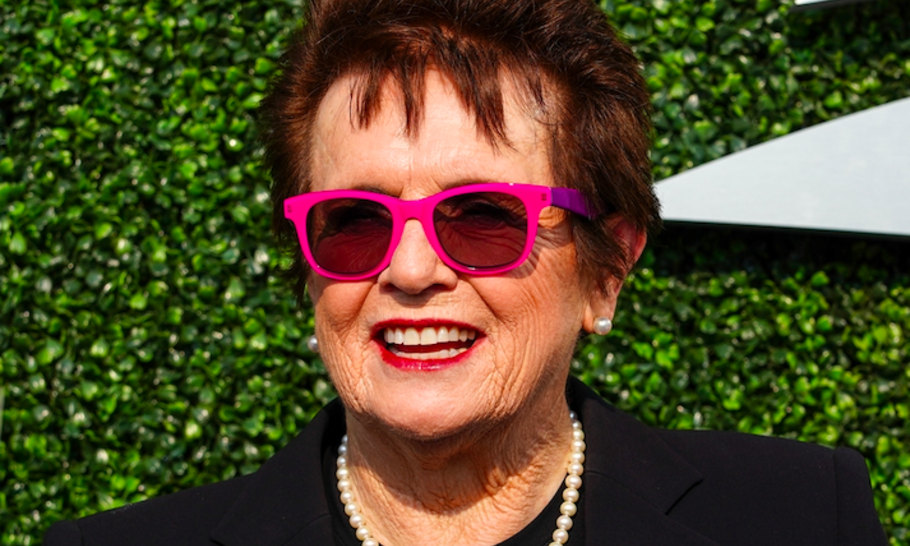 I don’t know how many readers watched Amol Rajan interviewing the former tennis number one, Billie Jean King, on BBC2 last Wednesday 22 June. For those who didn’t, I really recommend seeing it on BBC iPlayer.

Billie Jean holds an incredible 39 Grand Slam titles: 12 singles, 16 doubles and 11 mixed doubles. But she has been far more than just a top tennis player. She was also a serious social activist off the court. It’s down to her that women earn the same as the men today in the Grand Slams.

During the 1970s, when the women earned much less than the men, she formed a separate women’s circuit. She found a sponsor in Virginia Slims and enabled women professionals to earn both serious money and respect for the women’s game, at a time when female players were more valued for their looks than for their playing ability. The misogyny of male commentators (which would go along the lines of: “An attractive young lady, who if she took her glasses off and grew her hair…”) was quite breathtaking.

King also had a turbulent private life, which was made very public by the press. There was a massive backlash when it came out that she’d had an abortion — this was in 1971, before the Roe v Wade ruling. And then, on top of that, she was “outed” by a former female lover, with commercial endorsements lost overnight as a consequence.

At the age of 78, Billie Jean King shows no sign of letting up on the activism front. She campaigns tirelessly for women’s rights. Only last week she tweeted: “If Roe falls, millions of Americans would lose access to critical reproductive care. It is vital that we do all we can to protect this legislation.”

In the BBC interview, where she proudly shows off her rainbow watch strap, she and Amol Rajan discuss issues such as trans athletes, mental health issues in the tennis world and the response to Wimbledon banning Russian and Belarusian players. Her answers throughout the interview are considered and she is not afraid of admitting to not knowing the answers. She is forceful but not over-opinionated. Above all, she is compelling.

When I was growing up, Billie Jean King was my idol. As a junior, I modelled my whole game on hers. In fact, I still think of her when I serve. Hers was a loose and languid action.

She attacked, she screamed when she missed a volley, slamming her racket on the net cord followed by a roar of frustration. The British public were shocked at the “aggression”. It was unprepared for such a forceful female character.

I had a few coaching sessions with Billie Jean when I was a junior. Our paths crossed a number of times after that. Every time she saw me she’d go: “How are ya doing? how’s ya game?” in her inimitable Californian drawl.

Years later, I wangled my way into the Centre Court at Wimbledon, sneaking onto the photographers’ platform. I watched her every match.

The photographers knew nothing about tennis. They were just assigned the job. I remember one of them had covered a war the previous week. So they’d ask me things like: ”How does a tie break work?” or “Is this what they call a break point?” It wasn’t quite “Who won?’” but not far off.

They asked me to interview players because they were incapable of doing so. And when Billie Jean got to the final in 1975, one of them said: “We have a live slot on CBS News tomorrow. They want us to interview the winner. Would you do it?” I was just 19 and terrified at the prospect, but spluttered: “Yes!” I would never get a chance like that again.

The following day she slaughtered Evonne Goolagong Cawley. I was so busy dreaming up questions, I barely had time to watch.

I went into the post-match press conference. They led me into the studio, pinned mics all over me and sat me down. I had about five questions scrawled on a piece of paper, mostly pretty bland, along the lines of: “How do you feel?”

And then my idol walked in. She did a double-take, composed herself and then she said: “How are ya? How’s ya game?” She had just won Wimbledon and here she was, asking how I was. I hadn’t seen her in years and yet she immediately recognised and acknowledged me.

That was typical of Billie Jean. She was once quoted by Obama as being one of the top twenty most influential women in America.  But she never forgot the little guys.

(Billie Jean King’s All In: An Autobiography was published last year by Viking.)