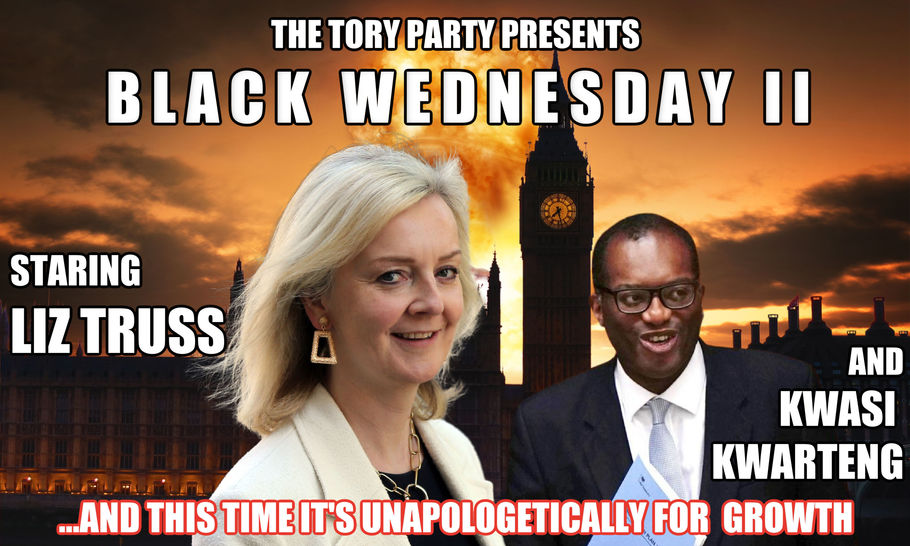 When you give a toy to a four-year-old, you know it’s unlikely to survive the year, possibly the month; perhaps even the week. Four-year-olds can be smart. They can be articulate, even persuasive. My grandchildren can tie me up in knots sometimes. What they can’t be – at least not the one’s I’ve ever encountered – is prudent or self-disciplined.

The devastation in the wake of the first – the very first – policy announcement by Liz Truss and Kwazi Kwarteng puts me in mind of emotionally incontinent toddlers let loose in a toy shop, without supervision and told: “Have fun, kids.”

What were they thinking? Were they thinking? Or did they just go “ Whoopie”? All those years drooling over the idea that tax cuts (for the rich) is the elixir of eternal growth. This was the moment to try out that shiny, red engine. Except it isn’t, because Britain faces a motorway pile-up and the new kids on the block have driven straight into it.

The grown-ups are understandably furious, virtually without exception. The pound is in free-fall; the IMF is wagging its finger; interest rates are soaring; affordable mortgage deals are disappearing; our pension funds are at risk; government debt is more expensive; dollar-denominated imports (including oil and gas) are more expensive.

Just when you thought it was safe to go outside, the cost-of-living crisis just got worse. Rewarding Britain’s wealthiest one per cent and bringing back loadsamoney to the City is about as politically astute as a slap in the face with a wet fish.

The Bank of England (the same BoE Truss accused of being late in tackling inflation) is launching one of its famous lifeboats to try and stop the rot. Thirty years after Black Wednesday, Britain’s leaders are, once again, the object of ridicule. This is incompetence on a truly epic scale.

The central bank, charged with controlling inflation, the beast that ultimately devours everything in its path, is pulling in one direction, Truss and Kwarteng in another. They chose to call it a “mini-budget” because to call it what it is — a Budget — would require them to run their homework past the grown-ups, the Office for Budget Responsibility. This deliberate omission, as my ex-FT colleague Martin Wolf writes, is scandalous.

As Paul Johnson of the Institute for Fiscal Studies says, the Chancellor has announced the biggest package of tax cuts in 50 years without even a semblance of an effort to make the public finance numbers add up. This on top of an emergency energy package set to cost at least £60bn in just half a year. What did they expect?

Apologists for this dismal duo who point the finger at “the markets” or the “City boys” for this rout should know better – and they probably do. Crispin Odey, Brexiter founder of Odey Asset Management — who with exquisite cynicism blames Remainers for the crisis — has made a killing by betting against the pound. Kwarteng used to work for him. I make no comment. But I will say this: Odey’s central judgement that governments have grossly underestimated the dangers of rising inflation was spot on. But his mate, now Chancellor of the Exchequer, couldn’t see the inconsistency staring him in the face as he piled debt on more debt.

The markets may not always behave rationally. But they are never partisan. Their job is to make money. That’s it. Full stop. When they sense something is awry they do what free-marketeers expect of them — which is to head for the exit. And why not? If an economic or fiscal policy harms the market, what else are they supposed to do?

Let us now also speak plainly about the Brexit effect. Whether Brexit can be made to “work” is a question for the future. What it has done is to elevate ideology or doctrine above reason and basic common sense in public discourse. The absence of belief (in Brexit or in the free market) has been turned into a heresy. The same, incidentally, was true of Jeremy Corbyn, who came over as a crank trapped in doctrinaire mindset closed to practical solutions.

In doing so Brexit has fatally weakened the ability of policy makers to think rationally or, as Sir Keir Starmer said in an intellectually coherent conference speech, to be focused. Kwarteng’s sacking of Sir Tom Scholar, the Treasury’s top mandarin, was the canary in the mine.

Britain is not uniquely facing economic headwinds. The fallout from the war in Ukraine following hard on the heels of the pandemic has made things harder right round the globe. But Britain has made things especially hard for itself by leaving the European Union.

Sterling has been on a slow downward path, aided it is true by a strong dollar. But it is also falling against the euro. Without a U-turn by the Chancellor, Sterling will test new lows in the coming weeks.

Where does all this leave us? At a political level Kwarteng’s future looks bleak: a clever man at one remove from reality. The Tory party’s reputation for fiscal prudence and sound economic management has been shredded. Truss has hit the ground running, face down. She will have to back down or introduce savage spending cuts. Labour are now comfortably ahead in the polls.

If we were being generous we could say that Truss and Kwarteng suffer from an excess of energy, ambition and ideological zeal. Rishi Sunak, Truss’s rival, warned that going on a spending spree before taming inflation was madness. Margaret Thatcher knew that.

Both Kwarteng and Truss came to office elected by a tiny slice of the electorate. She sold herself as a born-again Tory ready to usher in a new era. Kwarteng in particular has led a charmed life: Eton, Cambridge, Harvard, hedge fund manager, city analyst. This bred a certain intellectual arrogance. The party needs to take some responsibility.

Here’s the moral of this story: if you’re proposing to leave the house in changeable weather without an umbrella, it’s probably a good idea to look out of the window first.