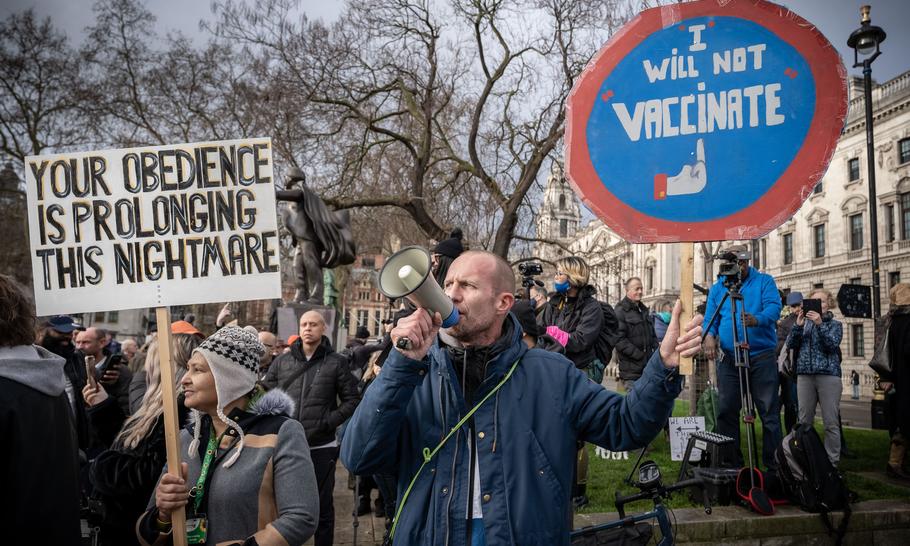 Omicron is not omnipotent. We may not yet know very much about the new variant of Covid, but the consensus is that it can be beaten without a return to the draconian regime that has blighted our lives for much of the last two years. Insisting that “we are nowhere near that”, Sajid Javid, the Health Secretary, has instead been given the task of accelerating the vaccination programme to ensure that all adults are offered an early booster jab.

This bold move is characteristic of Boris Johnson, who throughout the pandemic has championed vaccines rather than lockdowns and social distancing measures that damage the economy and store up longer term problems for the NHS. A year ago the Prime Minister was criticised for stopping short of a full lockdown to enable families to gather for Christmas at a time when the Alpha variant was spreading fast. At that time vaccines were only just becoming available and had yet to make an impact. The spike in deaths that took place in January and February was by then inevitable, but by March — thanks to the brilliant organisational skills of Dame Kate Bingham — fatalities were falling precipitously.

This December may be similarly nerve-wracking, as we wait to see how quickly the Omicron variant spreads and how well the vaccines perform. The success of the booster programme means that most of the older and more vulnerable population is already protected. The latest figure of 17.6 million who have had their third jab is rising by 2.5 million a week, but Javid has asked the NHS to extend the programme beyond the over-40s to all adults.

By reducing the gap between second and third injections from the optimal six to five months, we may slightly reduce the level of protection, but in the race against a highly transmissible new variant this seems a wise sacrifice. Trade-offs are always necessary when time is a major factor. In the early days of the programme, the Prime Minister and his advisers chose to follow the example of Israel, where both jabs were administered close together, rather than the EU, which insisted on a longer gap between them. As a result, the UK was the first large country to achieve almost universal adult protection, with more than 90 per cent fully vaccinated. The success of the UK vaccination programme made it possible to lift almost all restrictions last summer and enable the economy to recover unexpectedly rapidly.

In the booster programme, which began last September with the UK again in the vanguard, the Government also risked the possibility that some patients would refuse to “mix and match” vaccines, which scientists had determined was entirely safe. In practice, such reluctance has not been a major problem — unlike Germany, for example, where many people offered the Moderna booster are insisting on the “home-grown” Pfizer vaccine, developed by the German firm BioNTech. The UK is thus now in better shape to deal with the threat of Omicron, having given booster shots to nearly a quarter of the population, compared to fewer than 10 per cent in Italy, France, Spain and Germany. Among EU countries, only Hungary has come close to British levels of third jabs.

This remarkable achievement has, however, come at a price: the UK has suffered 145,000 deaths so far, compared to 134,000 in Italy, 120,000 in France and 101,000 in Germany. Of course, many different factors affect these death tolls, but they all have one thing in common: the majority of people who become seriously ill or die of Covid are now the unvaccinated.

According to Stephen Powis, head of NHS England, three quarters of the Covid patients occupying critical beds since July have been unvaccinated. This phenomenon is costing the lives of non-Covid patients, too. “These are beds that would historically have been used to provide life-saving surgeries for the most seriously ill patients,” he told the Sunday Times. But antivaxers are putting themselves at much greater risk, too. An unvaccinated person in their 40s is as likely to be hospitalised with Covid as a vaccinated person of 79; those in their 50s who refuse the jab are thereby incurring the same risks as octogenarians.

If Britain is to avoid another spike in deaths as a result of Omicron, it is not enough to boost the booster programme. We also need a new effort to persuade the remaining part of the adult population that refuses to be vaccinated to come forward and accept the jab. This is especially important for pregnant women, four out of five of whom are currently unvaccinated. These women and their unborn babies are at increased risk of serious illness compared to other young adults. Yet the myth that vaccines are dangerous for the foetus is remarkably persistent. No evidence has ever been produced, but expectant mothers appear to be especially susceptible to manipulation by social media, rumours spread by word of mouth, or mere “but instinct”.

Some of these young women will have been among the first cohort of girls to be given the HPV vaccine, launched 13 years ago to prevent cervical cancer. A new study by Cancer Research UK and published in the Lancet shows that those who received the jab 13 years ago now have rates of this cancer that are 87 per cent lower than the unvaccinated population, with cases falling from 50 a year to just five. The study shows that girls vaccinated between 12 and 13 enjoy the greatest benefits, with a 97 per cent fall in precancerous changes to cells. Without vaccination, some 36,000 of this cohort of women could have developed such precancerous cells.

Yet at the time when the new jab was introduced in 2012, antivaxers warned that inoculating pubescent children was risky and many parents refused permission, sometimes on religious grounds. The myth circulated that the HPV jab was a gateway to promiscuity. It was all nonsense, of course, and dangerous nonsense at that. Fortunately, the vast majority of parents now allow their daughters to have the HPV jab and cervical cancer will eventually become a rare disease.

This story about the benefits of vaccination, even at a tender age, is clear-cut and irrefutable. It could form the basis of a new publicity drive by the NHS to counter the torrent of antivaxer propaganda now flooding the darker recesses of social media. Sajid Javid needs to mobilise the best minds in the creative industries to mount a campaign capable of reaching hearts and minds that have so far proved resistant to reason.

If millions of people hold out against the jab, the danger is that the Omicron variant will fill NHS intensive care wards with unvaccinated patients on ventilators at a time when the seasonal surge in other conditions has stretched hospitals to the limit. Covid isolation rules mean that at any time tens of thousands of NHS staff are hors de combat — an essential measure to keep the coronavirus out of non-Covid wards. All this piles the pressure onto clinical services and reports of patients dying in ambulances while waiting for admission are multiplying.

We cannot afford to allow the unvaccinated to threaten the lives of vulnerable people in the rest of the population. Boris Johnson must summon up the courage to tell the country the truth about the consequences for us all of a minority refusing the jab. By all means offer incentives, try new forms of persuasion — but in the end we may have to use the stick as well as the carrot. If the choice comes down to imposing restrictions on the whole of society or only on the minority of the vaccine-reluctant, most people would say that the latter is fairer. Freedom implies that you must accept the consequences of your actions, especially when they may harm others.