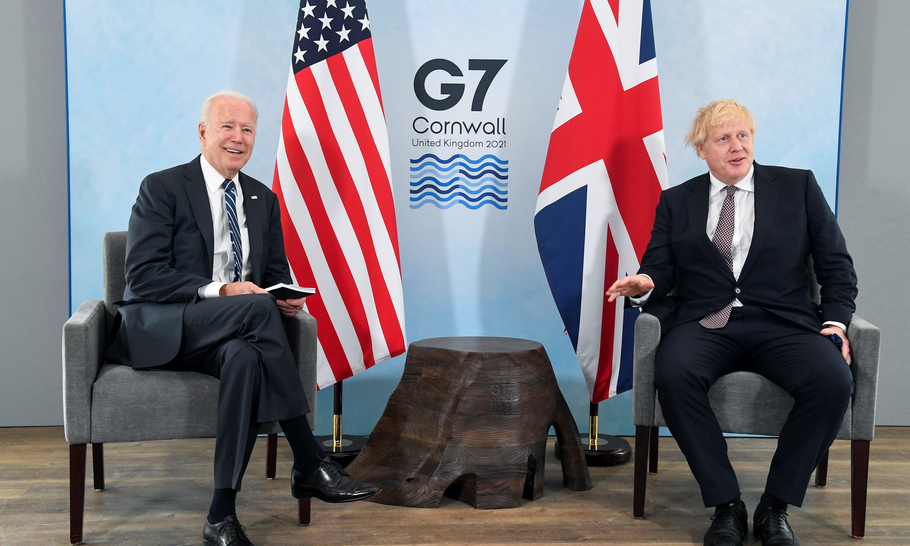 Carbis Bay in Cornwall was a fine setting to showcase post-Brexit Global Britain: grace, influence and soft power, steeped in history and punching above its weight.

It was an opportunity to put away his bad boy mantle, just for a weekend, and reveal his inner statesman.  But he blew it. The gathering was aimed at coming up with a common approach to global issues at a time of crisis for the world. And to a limited extent it did.

But it was overshadowed by a needless spat over the sale of sausages to Northern Ireland. It was an unsatisfactory summit for other reasons. We shall come to those. But, like a scrappy football match, it gave Johnson, the midfield bruiser, plenty of space to play his usual, disruptive game.

Needled in private by EU leaders who want Britain to honour the legally binding Northern Ireland Protocol, Johnson came out swinging in public. He would not hesitate, he told his exasperated guests (again), to suspend parts of the painstakingly negotiated agreement intended to keep the peace in Northern Ireland.

Faced with global problems of consequence – the pandemic, the world economy, climate change, China, cyber security – the leaders of the free world found themselves repeatedly distracted by the sausage war. The European and American press lapped it up. “La guerre de la saucisse” dominated the front pages.

Accompanied by David Frost, his Brexit enforcer, who with characteristic subtlety showed up wearing Union Jack socks, the Prime Minister thundered that the EU must stop taking a purist approach to the law. Dominic Raab, his barely visible Foreign Secretary, accused Merkel, Macron and the Commission of being “bloody-minded”.

Johnson’s conniption was all the more striking because the ink was barely dry on the New Atlantic Charter signed with President Biden. In it the two leaders resolve, among other things, to champion “the rule of law”. No irony there then.

It’s tempting to believe that Johnson just can’t help himself. That he just goes off on one when the red mist descends. But that would be to misread his intentions and underestimate his guile.

This Prime Minister will pick a fight in an empty room if he thinks that will advance his ambition, which is to entrench the Tory party’s command in England. He is the agent provocateur par excellence. No issue is too trivial. No venue is inappropriate. Nothing else matters. Whatever it takes.

Virtually everything he says and does, choreographed by his coterie of warrior advisers in Number 10, is weighed against the question: Will this help me keep those red wall seats? Will it bolster or weaken my image as the “put Britain first” leader? Will it play well in Batley and Spen, the next Labour by-election target?

Slashing foreign aid in the midst of a global pandemic, against the wishes of many in his own party; picking a fight with the UK’s nearest and oldest allies over Northern Ireland; sending an aircraft carrier to pester China; escalating the war on woke. It’s all grist to the mill. He is shameless — and that is not necessarily a criticism.

No matter that, having left the EU, Britain needs to work twice as hard to make fresh alliances and nurture existing ones. No matter that an avuncular Joe Biden asked him to cool it and find a way out of the Irish impasse. No matter that the coveted US-UK trade deal is still in the President’s in-tray and is likely to stay there until he sees a change in tone from a PM still behaving like the new kid on the block.

The Tory faithful, or at any rate those Tories who remain faithful to him, love Johnson for his swagger. His largely supine Cabinet doffs its cap in the belief that this outbreak of ultra-nationalism is what the country wants.

But virtually none of it advances the cause of Global Britain. Whether in the long run it even advances the interests of the Conservative Party, by persuading working class folk that Johnson isn’t just all mouth, remains to be seen.

This summit was the first since President Biden came to office and is likely to be the last before Angela Merkel steps down as German Chancellor. It was also the first since the virus launched itself on an unsuspecting and largely unprepared world. It was an important opportunity to link arms and present a strong united face to the world. But it fell short.

President Biden’s first foreign trip was intended to signal that the US is back. It disappointed on that front. There was not much to shout about. Biden was eager to portray the gathering as a reset of democracy versus autocracy. But his attempt to turn this event into an anti-China compact fell flat.

The free world understands the challenges posed by a power-hungry and potentially hostile China. But China is the world’s second largest economy. It is embedded deep within western economies seduced by decades of rock-bottom labour costs. You may not be able to live with it. You may worry about its penetration of strategic industries. But you can’t live without it.

Another disappointment was that the trumpeted international vaccine programme fell well short of the 11 billion jabs needed to keep developing nations – and therefore the world – safe. There is no pandemic Marshall plan. It was a moral but also a strategic failure, which China and Russia will gleefully exploit.

The move to tackle the appalling racket that is corporate tax avoidance by giants such as Google, Amazon and Facebook is a significant initiative with potentially far-reaching consequences. It signals a welcome shift away from shareholder power towards the interests of consumers and workers. If followed up — and that’s a big if — it could make a big difference to global cashflow as the world struggles to revive its economy.

The first is that we live in a world in which the nation state now predominates. Political preoccupations at home dictate foreign policy more than ever, blunting their ability to act globally. The world is turning inward.

The second is that the landscape is more crowded, more competitive, less homogenous. China is becoming a hegemon. The US, although no less powerful than it was, is by implication relatively diminished. Its supremacy is no longer unrivalled. This makes forging a common approach to the challenges posed by China and a resurgent Russia more complex, perhaps impossible.

The first Atlantic Charter, signed by Winston Churchill and Franklin Roosevelt in 1941, spoke of the obligations of the international community towards all nations “great or small, victor or vanquished”. The new charter, a bit like the aims of the summit, is long on rhetoric but short on specifics and limited in its ambitions.

It is probably too strong to say that the free world is leaderless. But it is not what it used to be. Our team is weaker than it has been for a long time and the opposition is significantly stronger.

In this shifting, fragmented world, shorn of old certainties, mavericks like Johnson, who disdain convention and make up the rules as they go along, will thrive. At least for a while.