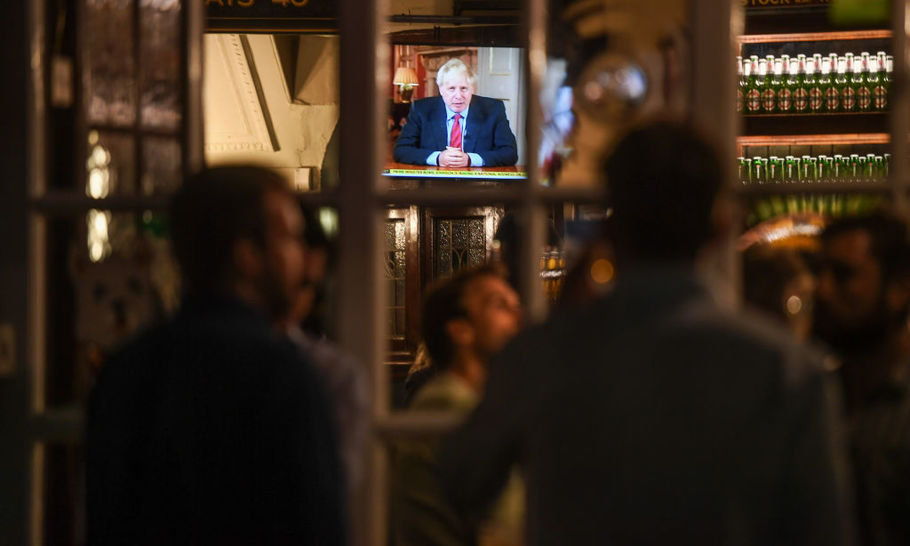 In his address to the nation last night, the Prime Minister rightly appealed to what Abraham Lincoln called the better angels of our nature. “Never in our history has our collective destiny and our collective health depended so completely on our individual behaviour.” He warned those who do not see why their lives and liberties should be restricted, that “your mild cough can be someone else’s death knell.” This time, he said, the threat was not just to life but to livelihoods: not only “many more deaths”, but a full lockdown too.

The latter is what many anxious viewers would have liked to hear from him. Announcing an unexpectedly moderate set of measures, the Prime Minister insisted that he was “deeply reluctant… to infringe anyone’s freedom”. But the only alternatives were worse: “If we follow these simple rules together, we will get through this winter together.” It was, he reiterated, “the spirit of togetherness that will carry us through.”

Boris Johnson’s politics and personality do not appeal to everyone. There will be many who have cogent criticisms to make of his inability to acknowledge past mistakes that cost lives and his failure to explain present reversals of advice. Some loathe his face, his voice and his character so deeply that they will have barely taken in a word he said. Some of them write for TheArticle and we will no doubt hear a great deal about Johnson “the self-interested man”. For them, the medium overshadows the message.

Yet for many more people, the person delivering these grim tidings is neither here nor there. Boris was elected less than a year ago and he is simply doing his job. What they do care about is whether he knows what he is doing. The prospect of a return to lockdown terrifies them and they will be relieved that this danger has been averted, at least for the moment. They blame the Government for its lack of competence — for instance, the failure to organise a more efficient testing regime — but when Johnson claims that “this broad approach is shared across the whole UK”, most would not dissent. Indeed, it is striking that neither the other parties nor the devolved administrations, all of whom are led by enemies of the PM, have publicly denounced his policy.

There will be many, admittedly, whose reaction will have been: “Was that it? What’s all the fuss about? We are doing all that already.” It is true that the vast majority of people are already wearing face coverings in taxis, shops and restaurants. The 10 pm curfew will be unpopular with night owls and put many more pubs and bars out of business, unless the Chancellor steps in with more taxpayers’ money to preserve jobs in his autumn Budget. Brides and grooms will be disappointed, as will those looking forward to the resumption of spectator sports. But most people won’t be seriously inconvenienced by the latest package of measures.

The nagging question remains: are these and the existing Covid-19 restrictions on social activity, such as the rule of six, enforceable? The PM conceded that “there have been too many breaches” and he sought to deter the defiant and the negligent with bigger fines and more police. Even the Army would be brought in as backup if necessary. Such sabre-rattling may be greeted with a collective shrug. Do you know anyone who has been fined? No, nor do I. Until the rules are enforced, they remain a dead letter.

The fact is, however, that Boris Johnson has once again risen to the occasion. Those who claim that he is selfish will find plenty of ammunition in the endless flow of gossip and rumour about his private life. Recent reports that he had been sighted in Italy, like most such tittle-tattle, turned out to be false. The Diary of an MP’s Wife by Sasha Swire, serialised in the press and published this week, provides yet more salacious material, though David Cameron emerges in a rather less flattering light than Boris Johnson.

None of this matters compared to the question: is the Prime Minister equal to the crisis now facing the country? So far, the answer must be yes. Boris Johnson has had to take tougher decisions than any of his recent predecessors in office. The economy has been damaged, the NHS has struggled to cope, children’s education has suffered, the weaknesses of British society have been laid bare, but so far we have avoided chaos and kept our nerve. The moderate course that is now being steered — neither laissez-faire nor authoritarian — commands general, if grudging, support.

Boris Johnson knows he is no Churchill, but he was right to deploy Churchillian prose in his broadcast. Just as the success of Britain’s wartime leadership depended on solidarity in sacrifice to defeat Nazi Germany, so today he is gambling on our readiness to put aside our personal interests for the sake of the common good. Churchill could appeal to a nation that had been through hell only a generation before, but he repeatedly reminded people of very recent dark times, such as the fall of France and Dunkirk. Boris likewise invokes our memories of March, when “we pulled together in a spirit of national sacrifice and community”.

The idea of togetherness, of a people that is far more than the sum of its parts, is immensely powerful. It is no more a Conservative idea than it is a Labour or Liberal one. It is no more English than Scottish, Welsh or Irish. It is, in the best sense, the idea of the nation. If Boris Johnson can summon up the courage and skill to lead us out of the wilderness of this pandemic, he will not only deserve the nation’s gratitude, but to be remembered as a genuinely national leader.