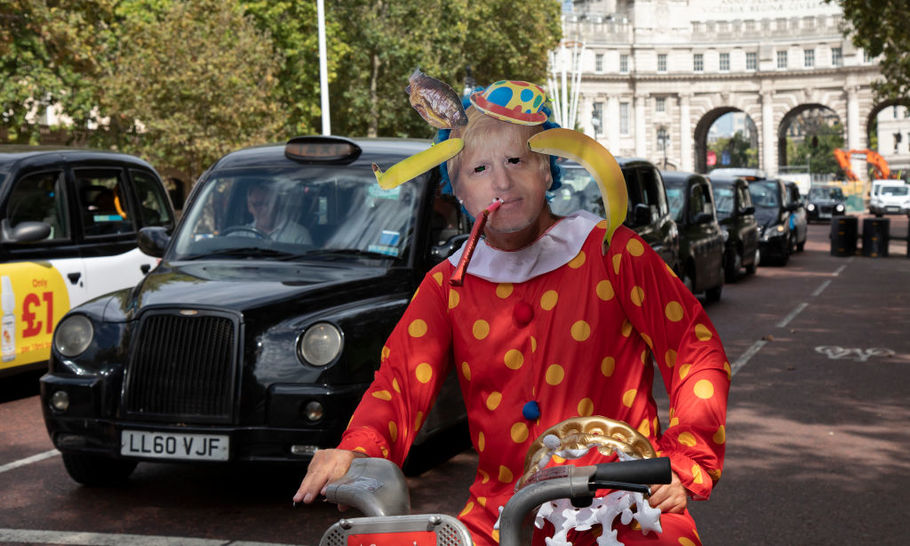 In the scheme of things, the botched launch of the government’s bike repair scheme may seem relatively trivial alongside tens of thousands of dead, and millions worried about their livelihoods. But it is worth looking at for what it says about Boris Johnson’s handling of the coronavirus crisis, and his leadership.

Johnson and bikes are an item. You will remember the many shots of him as Mayor riding around London. You will have heard of “Boris bikes,” though “Ken bikes” would have been a more accurate description, as it was the brainchild of Johnson’s predecessor, Ken Livingstone. Taking credit for the work of others — London 2010 the jewel in his crown on that front — and avoiding blame where due — Covid has its own catalogue — has been a lifelong habit.

Johnson and illness are an item. Most of the media went into Mills and Boon mode when he was rushed to hospital with the virus, so that as we were overtaking Spain and Italy in the death rate stakes, the Sun could splash on “Now THAT’S a Good Friday,” on account of the fact that he was out of intensive care. As for any link between his illness and a cavalier attitude to the pandemic — his speech saying the UK would show others how to see it off without economic harm; his twee little fireside chats with Jenny Harries, deputy chief medical officer, explaining masks bad, Cheltenham Races good; his squashing sombreros and seeing it off in 12 weeks; his non socially distanced press conferences and his boasting of shaking hands in hospitals — these and many other examples of British exceptionalism were edited out of the coverage. Boris was ill, a nation prays and the analysis can wait.

Johnson and obesity are an item. Despite his cycling, he has been overweight for much of his adult life, and his time in hospital brought home that he needed to get in better shape.

Bring those three things together — bikes, illness, obesity — and what do you have? A new drive on obesity, with cycling at the heart of it. It made me wish he and his colleagues had more direct experience of State schools, or poverty. It made me wonder whether it would require his dad to be in a care home, before Johnson would finally take seriously the scandal of social care, about which his plans for reform have generated many headlines and storylines, but precious little action. Government by anecdote and personal experience is not a great way to govern.

“Bicycle repair giveaways scheme crashes at launch.” Well, who’d have thought it? After the triumph of PPE, after all our “world-class” handling of the crisis, whoever would have imagined that something as simple as a bike repair scheme would flop? Who would ever have imagined that Johnson’s home video dog walks and his urging that we all get on our bikes, with the promise of a £50 voucher to fix old ones, might have needed a little more planning?

The site crashed on launch, got going for a couple of hours, crashed again before the day ended with the Department of Transport saying they could not be sure when the vouchers would be on offer again. That would be the same Department of Transport led by Grant Shapps who was stranded in Spain on holiday when the Cabinet decided to introduce “tough new quarantine rules” for any holidaymakers returning from Spain. I say “tough” because that is the word most of the media applied. I put it in quotes because the number of quarantine breach fines so far is so minimal as to suggest, as with so much with this government, it is all about the story, and nothing to do with the consequence.

Take credit, avoid blame. You’ll remember that when he came out of hospital he had a new line to describe the government handling of the crisis: “Our apparent success.” This was the moment at which Johnson and Covid gaslighting became an item. Say the opposite of what is true. Do it systematically, every time you speak, in Parliament or in the home videos. The more you get away with, the more you can do. If Parliament and media are weak, all the better.

So right now, all our problems appear to stem from “our European friends,” this despite having done more than anyone alive to ensure we don’t have that many friends in Europe at all, and then he can zone in on specific “friends in Europe” for further defriending. Step forward Spain. Have waiting in the wings Belgium, maybe Croatia, hold back on the big boys like France for a while, let’s see how the Spain gambit plays out in the focus groups.

I give you his explanation for the Spain decision — the whole country by the way, not the targeted approach of the Germans say, who have announced mass testing of people coming from three specific areas — in full. My commentary in italics.

“Let’s be absolutely clear (this from a government that has failed to provide clarity on so many issues so many times) what is happening in parts of Europe, amongst some of our European friends (ie not in blighty, and heaven forfend we should focus too much on Oldham, Blackburn, Leicester, let alone that other countries should use our problems there to introduce quarantine on travellers from the whole of the UK) I’m afraid you are starting to see in some places the signs of a second wave of the pandemic (I won’t trouble you with figures because you might have the ones to hand to show it is worse in parts of England).”

“And we all remember what happened last time (though I am hoping actually you don’t, because I didn’t bother to take it seriously at first and lots of people died as a result). It’s absolutely vital therefore that we make the necessary preparations here in the UK, as we are doing, (see fiascos above and below) vital that we all continue to observe the rules on social distancing, washing hands, wearing masks in shops and on public transport and so on, two metres apart, one metre with mitigations, everybody knows what the rules are (despite the confusion we have sown on all of them), that’s how we’ll help ourselves (because we are British and special.)”

“But also it’s vital that when people are coming back from abroad, (big place) if they are coming back from a place where I’m afraid there is another outbreak, (no Leicester-style local applications for ‘abroad’) they must go into quarantine (but don’t worry because we don’t have the infrastructure to police it, so it won’t make much difference but I reckon this clip will lead the news, which is the point). That’s why we have taken the action we have and we will continue throughout the summer to take such action where it is necessary (see above re Belgium etc.)”

There are plenty of other explanations for the coming second wave. The dropping of the pretence that they are “following the science.” The sidelining of the chief medical and chief scientific officers, and of the chief nurse, Ruth May, for refusing to endorse the conduct of Dominic Cummings in breaking lockdown rules. The impact of Cummings’s conduct on public attitudes to government messaging. The woefully mixed messaging itself. The shambolic track and trace system. Testing shambles. Masks chaos. The much-hyped but failed NHS app. The early moves to release people from lockdown. The elevation of economic messaging over health messaging.

Nothing to see there, folks, don’t you see, it’s all about the foreigners, especially the ones prone to complain anbout the not very commonsensical behaviour of Brits abroad.

Trump has his China virus, Johnson has his EU second spike. It’s another perfect fit, which covers off Brexit and Covid in one swoop. We would have Covid under control, but for these foreigners needing us to mix with them to keep their tourism alive. Messaging to die for. No wonder he couldn’t resist a smile at the Spaniards’ objection to the British move. And by the time Belgium is listed as a risk, he gets another Brexit hit — and the bikes, Blackburn, Leicester, Oldham, will be long forgotten.