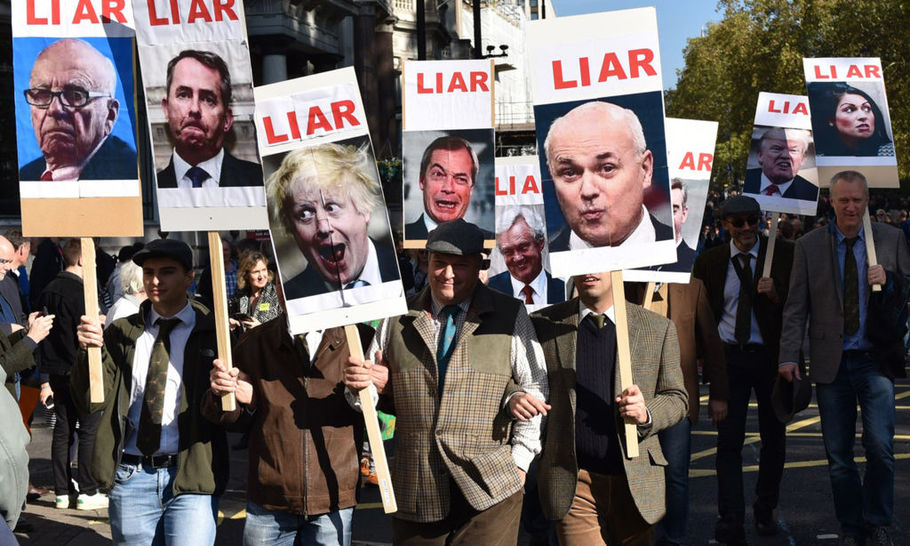 After three months in what Dominic Cummings’s wife Mary Wakefield mendaciously called “London lockdown,” I have just driven through five countries in two days. I had to go to southern Germany for a work-related thing, didn’t much fancy plane or train, so decided to drive, and my partner Fiona suggested we tag on a few days in the Dolomites. Why not? After all, given the way the Brexit farce is going, it may be the last time we can take the dog abroad without booking four months in advance.

As we set off on Monday morning, I saw at a news stand the Daily Express, propaganda sheet for whatever false hope or fantasy Boris Johnson is peddling. It led with the screaming headline: “GET READY! £93M BLITZ KICKSTARTS BRITAIN’S EU EXIT.”

“Blitz” sounds so exciting, and of course resonates with the “spirit of the blitz” tone of the Express’s flag-waving coverage of Johnson and his Vote Leave cronies. It turned out to be a “publicity blitz” around the theme “Let’s Get Going.” Four years on from when many thought we were already supposed to have gone, this was but the latest three word troll by the team that gave you “Take Back Control”, “Get Brexit Done”, “Whatever It Takes”, and “Build, Build, Build”, when it looks like the only things being built right now are a massive lorry park in Kent, and a few hundred million quids worth of border posts.

Sadly the BBC got into the Number 10 propaganda game on that one, presenting this £705 million splurge on infrastructure they said we would never need as “a plan” for what Michael Gove assured us would be the most secure border in the world.

Back in the real world, the actual news is that we should prepare for a hike in health insurance bills and higher phone bills. Also, businessmen and women, some of whom may well have voted for this sh*t-show on the basis that “Brussels bureaucracy” was holding them back, and that Brexit would sweep it all away, were learning that they may have to fill in five times as many forms, and pay for the privilege. According to the Financial Times, the combined cost will be £7bn. “Less red tape”, they said. The reality  is a little different — 215 million new forms, and 50,000 new Customs officials. At least they won’t be short of applicants. Add Brexit to Covid and you’re looking at an unemployment meltdown, made in Number 10. They failed on Covid. They failed on Brexit. The combination is lethal.

We drove through the future lorry park, once known as the “Garden of England”, listening to the Ashford MP Damian Green on the radio. He complained about it being sited there. Fiona checked out how Ashford had voted in the referendum — 60-40 for Brexit.

By the time Gove set out his “plans” in the Commons, we were heading through France and Germany, listening to Billy Connolly’s brilliant autobiography, and so despite a bit of twitter media monitoring when we stopped, I didn’t really follow what happened.

So yesterday morning, keen to put my recent Goethe Institut German refresher course to good use, I got all the papers in the hotel reception, thinking that, though the UK’s latest pronouncements on Brexit might not be front page news, the broadsheets would at least cover it. Not a word. Manchester City was the only British institution to get a mention anywhere.

It called to mind the recent roundtable Chancellor Angela Merkel did with a group of European journalists, including from the Guardian, ahead of the German Presidency of the EU. It was noteworthy for the fact there was just one question on Brexit, briefly despatched, with the observation that the Brits have made their choice and if they want to leave the single market and customs union, they will have to live with the consequences. The tone suggested to me she had pretty much given up on us. As one of her team said to me when Johnson became Prime Minister, “as you know, she likes serious people.”

From Germany we drove into Switzerland, passing mile after mile of lorries queueing to get through customs checks, necessary despite the special deal they have with the EU. These are the queues and the checks the Brexit fantasists waved away as “Project Fear”. Of course, back then there was no question of leaving the single market. They needed us more than we needed them, remember? David Davis and Iain Duncan-Smith told us so. We held all the cards, said Gove. Simplest deal in human history, said Liam Fox, currently the butt of bemused jokes in any discussion about who might be the next head of the World Trade Organisation, his nomination by Johnson further evidence of their total unseriousness.

Now that reality is dawning, the fantasists, for whom responsibility is not an option, really are thrashing around. Reading the latest whinings of John Longworth, former chief of the CBI who now runs the Centre for Brexit Policy, I sense the Brexiters’ only route now is to say that Remainers forced them to do it. They certainly seem to be claiming that the Withdrawal Agreement was not their work.

Longworth thundered recently: “The Remainers will always be shamed for shackling the country to a poison pill: the Withdrawal Agreement.” But hold on, wasn’t this the “oven-ready deal” that Johnson promised during the election, another of the glib soundbites that litter this wretched story? People like me always said it was a load of nonsense. It was your beloved “Get Brexit Done”-man Johnson who told us how easy it would be. Sorry, Longworth, Martin, Dyson, Farage, Rees-Mogg, Francois, Duncan-Smith, Murdoch and all who sail in him, this is your sh*t-show, and it’s time you had the decency to own it.

As for Davis, who with Duncan-Smith might as well have their own chairs in the broadcasters’ studio, did he really tell Radio 4 yesterday that if the Chinese want to trade with us, they have to follow our rules? Yes — yes, he did. Self-awareness is not their strong point. Davis, one of a succession of failed Brexit Secretaries, is among those now urging a review of the Withdrawal Agreement.

In any event, if you are negotiating something as serious as your country’s future, I wonder if “implicit” is really enough. What a mess these clowns have made of it. Their great project is falling apart before it has even got going.

It’s a mess that originates from the lies on which Brexit was sold, and the lies and laziness since. They have had four years to sort this out. They have nothing sorted on trade, immigration, banks, fish; you name it, they have ballsed it up. Even the blue passport they were so excited about isn’t really blue.

Billy Connolly does not get political too often. But he did towards the end of his book, written in 2018, as he reflected on his life. He had never been in favour of Scottish independence, he said, but Brexit was pushing him that way. Brexit, he added, was “a sin and a crime.”

He is absolutely right. And the men — they are nearly all men — who drove it, lied for it, cheated for it, and are lying and cheating for it still, need to be hounded until they pay for those sins and crimes.

The problem is, meantime, they are destroying a once great country. They no longer even pretend to know why.