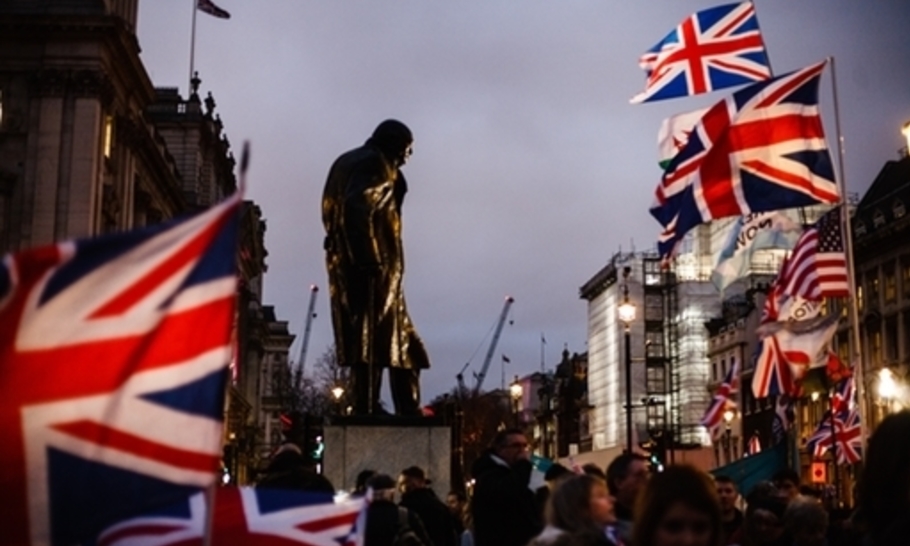 On Friday evening, as Britain entered the final hours of its EU membership, I headed down to Parliament Square. I had no particular reason to be there. I didn’t vote for Brexit so this wasn’t my victory to cherish. Yet I wouldn’t have wanted to be anywhere else. It was my chance to feel a part of history, like walking into a television newsreel.

But what I saw in Parliament Square concerned me. I showed up early, as revellers were arriving for a Leave Means Leave celebration headlined by Nigel Farage. As you’d expect, the event, the most prominent Brexit party in the country, attracted a great many Tories and Brexit Party supporters. But it also attracted something else entirely.

It was perhaps 20 minutes after I arrived that I heard the first Tommy Robinson chants. It was from a small group to be sure, concentrated in the north-east of Parliament Square near the statue of Winston Churchill, but it was re-enacted repeatedly. The men interspersed praise for the anti-Muslim demagogue with chants of “there’s only one Boris Johnson” and a song demanding the resignation of Sadiq Khan.

A walk around the square did little to quell my unease. Near one corner of the square a group spent at least half an hour stamping EU flags into the mud, to the soundtrack of “Rule Britannia” and “God Save the Queen”, sung by a crowd of onlookers. At one point this was done in front of a flag of the loyalist icon William of Orange, ironically the last European to successfully invade Britain. Elsewhere an EU flag was burnt, in an apparent attempt to turn London into some pound shop Tehran, while one protestor held up a placard demanding we “lock up the traitors”.

Alcohol was technically banned but in practice flowed freely. Police made some early attempts to stop drinking, diving into the crowd to confiscate cans of beer, but they soon gave up. One man, irritated by the intrusion, responded by singing a song about Harry Roberts, who shot dead three police officers in 1966, being his friend because “he kills coppers”. The song continued with a plea for Roberts to be released from prison so he can “kill some more”, though Roberts was in fact freed in 2014. Elsewhere, another man kept repeatedly shouting that Britain must “stop turning churches into mosques”.

What this all reminded me of, in a strange way, was so many rallies of the left I’ve covered. It is entirely normal, at protests, to see the centre and far-left marching together without a care in the world. Each year, by example, a May Day parade processes from the Marx Memorial Library in Clerkenwell to Trafalgar Square. Banners displayed include those of constituency Labour parties and mainstream trade unions, alongside portraits of Stalin and Chairman Mao. Such ideological blending is common currency at protests with a leftist theme. I’ve seen communist flags, representing an ideology responsible for imprisoning hundreds of millions, proudly held aloft at protests against Nato, Trump and the killing of Qasem Soleimani.

This toleration of leftist extremism by the UK centre-left has proved remarkably damaging. For years Labour moderates regarded the far-left, with its obscure theoretical publications and strange fixation with “Zionism”, as a little embarrassing but essentially harmless. As such, even during their prime the Blairites were happy to share Labour with the likes of John McDonnell, a man who praised the “bravery” of the IRA and described communist dictator Lenin as one of his “most significant” political influences. This naivety, and willingness to make common cause with the radical left against the right, would end up costing Labour moderates their party.

The conservative movement needs to ensure it doesn’t repeat the same mistakes. Over the past few decades the firewall between the moderate and radical right in Britain has, in contrast to its leftist counterpart, largely held firm. But there are worrying signs this could be changing.

I was disappointed, but not particularly surprised, when Buzzfeed reported a Conservative MP would be speaking at a “National Conservatism” conference in Rome. The event, despite its title, had little relation to mainstream British conservatism. It was a gathering of authoritarian nationalists, some from political parties whose intellectual roots incorporated fascism. Speakers included Marion Maréchal, the more radical niece of the National Rally’s Marine Le Pen, Matteo Salvini and Viktor Orban. If this is the future of conservatism then I for one want no part in it.

To see what happens when the barriers between the moderate the extreme right break down, we need only glance across the Atlantic. America has a president who campaigned on a platform that included banning Muslims from entering the US and who repeatedly refused to say he would concede if defeated in 2016. The Trumpian coalition incorporates both mainstream conservatives and Infowars nuts, people who believe the Sandy Hook school massacre was a hoax, and at times it’s hard to tell which holds the whip hand. British conservatism has been well served by its historic disregard for the extreme right. It would be a grievous mistake if, in some nationalist inspired spasm, this is allowed to weaken.