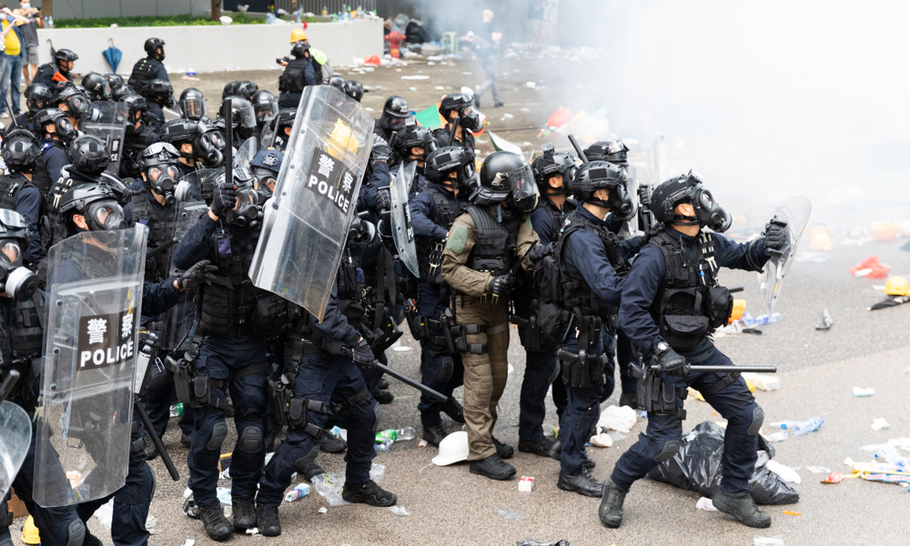 Hong Kong is descending further into chaos, with education shut down, public transport suspended, the Hang Seng stock market index falling, and police pulling guns on protesters who have now been labelled as “enemies of the people” by the ruling communists of China.

The clouds of tear gas aimed at students wearing face masks to protect their identity from the Chinese surveillance state are now obscuring the true nature of an existential fight to hold onto freedoms that the people of mainland China do not enjoy, and which those in Hong Kong and Taiwan rightly fear they are set to lose.

Hong Kong people, like those in Taiwan, keep a keen and wary eye on the increasingly tight squeeze that Chinese authorities exert on the people of mainland China, where control is holistic and dissent is not tolerated.

The Communist Party government is above the law, and these two outposts of free speech threaten Beijing’s thin-skinned authoritarians, who know that political power does indeed, as Mao said, grow out of the barrel of a gun.

Hong Kong police used to be the most popular and professional in Asia, if not the world. Now they are widely reviled as they refer to protestors as “cockroaches,” deploy tear gas and pepper spray against unarmed marchers, target journalists, show leniency towards violent Triad thugs who attack protesting citizens, and this week helped large numbers of mainland Chinese students flee over the border into China.

The brutality of the Hong Kong police is doubtless a product of their training by Chinese authorities; their tactics have come as a shock as they contribute to an air of confrontation that spirals ever downward. Hong Kong people now support violent tactics in their fight to maintain their freedoms, even as they brace for Tiananmen-style retribution from the garrisoned troops of the People’s Liberation Army.

This latest wave of protest began five months ago, in response to an attempt by Beijing’s placemen in Hong Kong to pass into law an extradition bill that would allow Chinese authorities to have anyone they deem to be a criminal whisked across the border to face the Chinese justice system.

While this might apply to people accused of serious crimes, it could also be extended to anyone who voices political views unfavourable to Beijing, or criticises its style of oppressive governance. Journalists, writers and publishers; human rights activists; artists — indeed, anyone in Hong Kong, resident or otherwise, that Beijing’s authorities view as a threat.

Importantly, the extradition bill is just a small part of what appears to be Beijing’s plans for bringing Hong Kong to heel. A senior Beijing official last week called for the enactment of national security legislation that would potentially see Hong Kong subject to direct rule by the Chinese Communist Party.

It is not long ago that five Hong Kong booksellers disappeared — four from Hong Kong, one from Thailand — to resurface in detention in China. For publishers and sellers of politically-sensitive material, the message was chillingly clear that freedom of speech is vulnerable to Beijing’s sensitivities, and that Hong Kong’s presumption of rule of law can no longer be taken for granted.

This is the very nub of the issue — Hong Kong is the only place in China that enforces a rule of law that is not bound by politics, that provides an independent blanket of protection for all that fall within its purview, that is recognised internationally, and provides the bedrock of confidence for international business contracts. This is why lawyers, accountants and bankers have joined the protests.

The extradition law would blow all that away. China’s politicised application of what passes for justice would prevail. Without that outpost of legal protection, the Chinese Communist Party’s version of “law” would prevail — not only in Hong Kong, but across the globe. Anywhere China does business — and there are few places now it does not — Beijing would have the upper hand in dictating terms, conditions and repercussions.

It is vital that this point be understood. Hong Kong is the litmus test for how much the world is willing to accept — or give up — in return for Beijing’s largesse.

For years, Chinese state-controlled steel mills have dumped poor-quality product on the world at below-market prices, and as George Magnus writes on this site, this week China bought a troubled British steel mill to applause for saving a few thousand jobs. China already owns ports across Africa and Asia after government failures to meet stringent loan repayment conditions.

Beijing is undermining freedom of thought on university campuses worldwide. The Chinese government is engaged in a global campaign to control the next generation of 5G wireless networks that will potentially extend to every facet of modern life.

At home, thousands, possibly millions of Muslims of the Uighur minority, regarded by Beijing as potential terrorists, are imprisoned in “re-education” camps amid reports of systematic rapes of Uighur women by Chinese police. It’s an extermination campaign that the world, including Islamic states, has shamefully turned a blind eye to.

Hong Kong is on the frontline of a fight against authoritarianism that is already eroding the freedoms of the West. Hong Kong people understand what is at stake, and they are willing to fight, as hard and for as long it takes. The rest of us, rather than standing by and tutting at the violence, must squint through the tear gas and see what it is we have to lose.