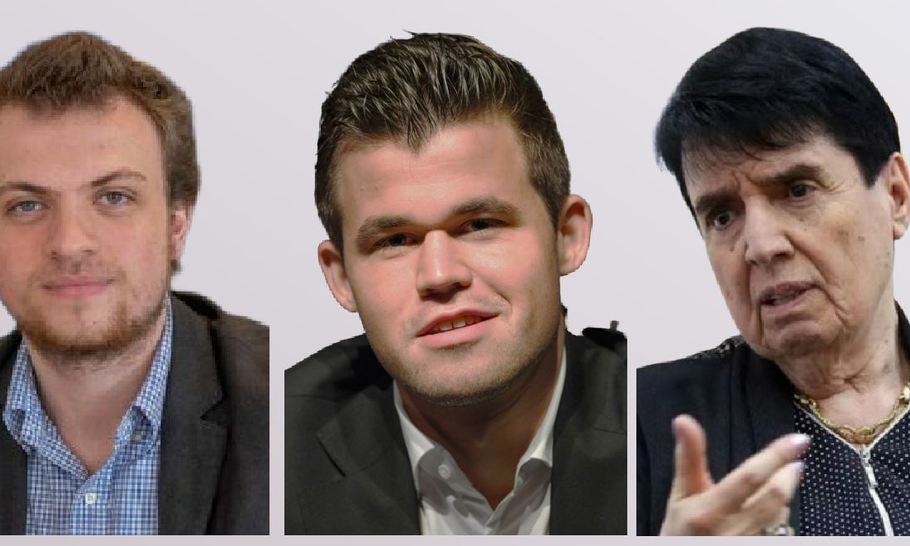 Everything that follows this preamble proceeds from a common cognisance of the presumption of innocence: Ei incumbit probatio qui dicit, non qui negat. (“The burden of proof lies upon him who affirms, not he who denies.)”

There is, however, an unusual and unwanted Banquo-like spectre at the feast, in that last week Carlsen lost a game in record time. The champion sensationally downed tools and resigned the game at the earliest occasion permitted by tournament rules, against the youthful American Hans Niemann (now 19).

For a champion who loses rarely this represents an ominous setback — the more so, given that he has now lost three times against Niemann in more or less rapid succession. Before explaining the background, I digress with a brief disquisition on the comparative invincibility of the grandest of Grandmasters of the game.

So… how does Carlsen’s IQ (Invincibility Quotient) compare with similar avoidance of loss in the past? Paradoxically the turbulent and frequently unsound Mikhail Tal was a serious exponent of lengthy series of games without losing. Many years before, the legendary José Raul Capablanca survived for eight years without a single loss between 1916 and 1924, until he succumbed to Reti’s hypermodern innovations at the tournament in New York. This feat included a world championship match against the equally legendary Emanuel Lasker. Obviously Capablanca’s eight year record was thoroughly meritorious, but amounted to far fewer games than Carlsen’s undefeated game output over just one year.

The yardsticks for sequential records normally involve citing those two icons of the Cold War chess scene, Bobby Fischer and Tigran Petrosian. Clearly, there are some grey areas in comparing their competing claims for records. Such conundra can perhaps only be resolved by Guinness World Records intervening to establish some objective standards, such as rating criteria for judging performances. Petrosian was World Champion between 1963 and 1969, while Bobby Fischer was champion from 1972 until 1975, when he forfeited the title without a fight.

Now a frequently asked question: just how hard was it to beat Petrosian at his best?

I have compared Petrosian’s results in the World Championship cycle which brought him the title (1961-1963) with those of Bobby Fischer over his own victorious series of qualifiers and the final challenge (1970-1972).

Fischer lost four games out of 62 (I have ignored defaults) — White vs. Larsen — Black vs. Petrosian — Black vs. Spassky x 2. This means that Petrosian lost 3.33 per cent of his world championship cycle games, while Fischer at his peak lost 6.45 per cent. So, at their respective bests, Fischer was still twice as likely to lose as Petrosian.

The most controversial of these losses was game one of the 1972 “match of the century” between Fischer and Spassky. Fischer grabbed a hot pawn and lived to rue his bravado.

The glaring difference, of course, is that during his world title run, Fischer won a straight 13 games, without conceding a single loss or draw, against the elite Grandmasters Mark Taimanov, Bent Larsen and Petrosian himself. Petrosian never achieved anything like such a burst of winning games. Indeed, few if any have.

Fischer was a kind of angry god of chess, and echoes of his monumental rage are beginning to show in the psychological makeup of Carlsen, not least in his weird decision to retire as world champion, while still competing in high level non-championship events.

Avoiding loss at chess is a fine art. I was particularly proud of a record I once set (since, doubtless, many times overturned) by going through four consecutive British Championships involving 48 games without losing any.

For a player who does not like to lose, resigning is anathema, so how to explain Carlsen’s double resignation, the second of which, after playing just one move against Niemann.

The casus belli arose in this year’s Sinquefield elite tournament where the relatively lesser known, still teenage, American Grandmaster Hans Niemann, playing black, caught Carlsen in an inferior opening line and went on to defeat the champion. Carlsen’s reaction was to immediately withdraw from the event, a legally and morally dubious decision. Not only did the champion infringe tournament rules, but his disappearance cancelled Niemann’s otherwise colossal achievement and cast implicit doubt on whether Niemann had cheated by communing with a clandestine computer. Niemann would have been leading the competition, buoyed up by a famous victory and possibly en route to a stupendous first prize. Instead, accusations of foul play and the accompanying furore, fuelled online mainly by the experienced American commentator and Grandmaster, Hikaru Nakamura, derailed the young matador and left him unable to notch more than a mediocre tournament placing.

Opinions varied, including some outré suggestions by Elon Musk. Niemann’s case was not helped by two past incidents of computer-assisted online play, to which Niemann confessed in lengthy subsequent interviews — thus expending energy, which should have been devoted to success in the Sinquefield competition. Niemann claimed to be a reformed character and  vociferously denied cheating against Carlsen. And indeed, the parable of the Prodigal Son (Luke 15) indicates that Heaven rejoices more in the true repentance of a sinner than in the continued conformity of the righteous.

Opinions in the chess world are divided. The senior British arbiter David Sedgwick thinks there was no cheating. However, the former Reuter’s chess correspondent, Adam Black, has suggested that a professional magician utilising the self-same nanotechnology, to which Elon Musk had amusingly alluded, might still frustrate all attempts at imposing security.

Be that as it may, fate decreed that, for reasons of contractual obligation, Niemann and Carlsen were soon to meet again in the Bank Julius Baer tournament a week or so after the initial fracas. As we have seen, Carlsen’s reaction was to default after a couple of moves and walk out.

Professor Ken Regan was better known as a chess player before becoming an academic, reaching the IM title as a junior, and even qualifying for the US Championship. Despite his talent for the game, he chose to pursue an academic career, eventually obtaining a PhD in Mathematics from Oxford University in complexity theory.

In 2006, at the cusp of the infamous “toiletgate” controversy during the Topalov-Kramnik World Championship, he was brought in to provide expert analysis of the cheating accusations leveraged by the Topalov Team against Vladimir Kramnik. Regan has since developed statistical methods to prove cheating, in a series of scientific papers which are accessible on his homepage. In a recent interview with chessbase magazine, he spoke of having analysed all of Hans Niemann’s games over the last two years, including online games, such as those played on Chess.com, and their events, and concluded that “there is no reason whatsoever to suspect him of cheating.”

Nitish Pahwa of the online Slate Magazine expanded further: “Yet Niemann has his defenders. Many grandmasters, like Garry Kasparov, have analysed his Sinquefield moves and claimed Niemann is very likely ‘clean’. To them, the most likely explanation for this upset is that Carlsen just had a bad game against a supertalented player on the rise. Some have called on Nakamura to apologise (he hasn’t) and for Carlsen to give a more detailed story. Others pointed out that Chess.com, which has once again banned Niemann, is not exactly a disinterested party: Carlsen is one of the site’s shareholders.

And on Sept. 10, the Sinquefield Cup’s chief arbiter released a statement: “We currently have no indication that any player has been playing unfairly in the 2022 Sinquefield Cup. This includes all rounds played to date.” One must presume here, a diplomatically measured omission of any mention that Carlsen’s behaviour has gravely compromised FIDÉ protocols for appropriate investigation.

This time round, after Carlsen’s most recent capitulation, global opinion swung definitively behind Niemann. Carlsen’s gesture brought chess into disrepute, doubtless drove a coach and horses through tournament regulations, and of course insulted the sponsors. If the event were not sponsored partly by Carlsen’s own “Play Magnus” group, the World Champion and (as I write, tournament leader) might even have been ejected from the tournament.

Worse, Chess.com, the online scene of Niemann’s younger misdemeanours, having reinstated him after his confessions, mysteriously banned him again, also outrageously disinviting him from one of their premier status tournaments. Despite their reference to, “…detailed evidence … concerning our decision”, the only material fact to have changed in the three days prior, had been what now appears to be his entirely legitimate victory over Carlsen in the Sinquefield Cup? Any alleged evidence remains beyond the public domain.

Nor, apart from his initial retweet of football manager Jose Mourinho’s cryptic quotation, “I prefer really not to speak. If I speak, I am in big trouble”, has Carlsen made any public statement. Is it relevant here that Carlsen is a significant shareholder in Chess.com — which has recently, in a multimillion-dollar deal, acquired Play Magnus as part of its corporate portfolio?

What is the solution? Some might conclude that the promising career of a reformed but talented sinner might be under attack from powerful and influential interests, such as the World Champion and his multi-tentacular business empire. It was of note that several “objective” pundits pontificated from platforms suitably adorned by the graphics of that chess site sponsor, which is a more than interested party to these proceedings.

On a related note, Netflix have recently conceded defeat in their case with Nona Gaprindashvili. The former Women’s World Champion (1962-1978) sued the production company, accusing it of defaming her in their globally popular Queen’s Gambit TV drama, by falsely claiming in the script that she had never competed against male grandmasters. The exact size of the settlement has not been disclosed, but is rumoured to be in seven figures — enough dollars to keep Grandmaster Gaprindashvili, now 81, in caviar in her native Georgia for many years to come.

My recommendation to Hans Niemann is that he should promptly consult Nona’s successful legal team, led by the Oxford-educated Alexander Rufus-Isaacs. While we await the nigh-inevitable flourish of legal quills, let us dismiss speculation and examine some data, namely Niemann’s trio of wins against the World Champion:

Raymond Keene ’ s latest book “ Fifty Shades of Ray: Chess in the year of the Coronavirus”, containing some of his best pieces from TheArticle, is now available from  Blackwell ’ s .