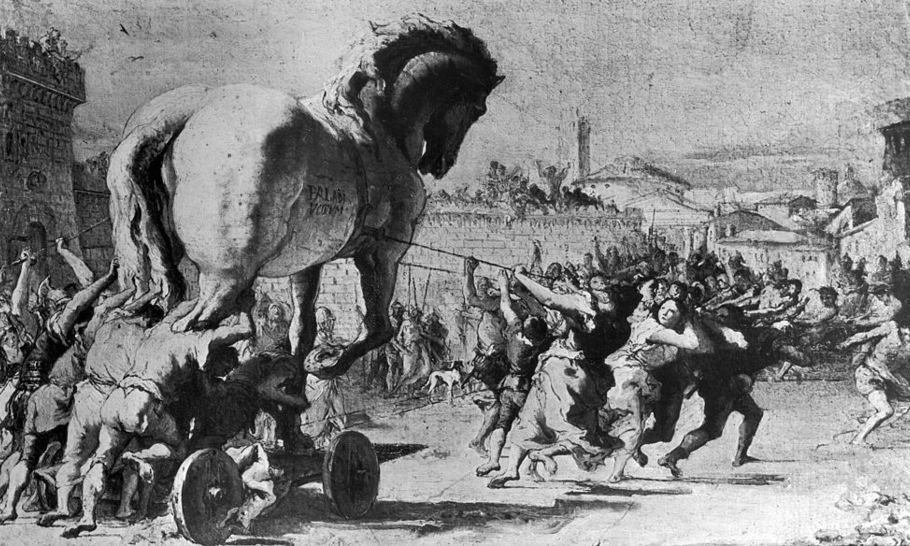 In a previous column of 17th October 2020 I referred to a work by the great ancient Greek potter and vase-painter Exekias, which depicts the Greek heroes, Ajax and Achilles, absorbed in a board game during the siege of Troy. The game was not chess, but that visual evidence did not discourage classicists from dating the moment of the invention of chess to the siege. It is generally accepted that Homer’s Iliad, which recounts dramatic key events from the siege, emanates from the 8th century BCE. The supposition that chess also derives from that period would place its introduction in an era centuries before even Needham’s claim, scrutinised in my column last week, that chess, under the guise of Xiangqi (Chinese chess), dates from China in the sixth century AD.

So which genius, according to this scenario, is meant to have invented chess? The answer is Palamedes, the only warrior in the Trojan War to have outwitted the cunning Odysseus.

In the latter half of the 18th century, and the first decades of the 19th, France dominated world chess with a stream of champions, such as Philidor, Deschapelles, La Bourdonnais and Saint-Amant, the last of whom continued the tradition of the French beating the English at chess, by winning a short match in London against the foremost English exponent, Howard Staunton.

It was Louis-Charles Mahé de La Bourdonnais, cementing his reputation with a series of victories in London during 1834, who conceived the notion of founding the world’s first chess magazine, which he christened Le Palamède, in honour of the supposed mythical inventor of the game. The evidence was nebulous, based on parallel legends of Palamedes’s alleged invention of dice, even, in some accounts, of numbers and the general fact that Palamedes was, if anything, even more intelligent than the famously brainy Odysseus.

La Bourdonnais launched his ground-breaking periodical in 1836 and it lasted until 1839. La Bourdonnais died a year later. In 1841 Le Palamède was revived by his successor as the leading French chess protagonist, Pierre Charles Fournier de Saint-Amant, who published it continuously until the close of 1847, when this homage to the Ancient Greek hero finally and definitively ceased publication. Somewhat ironically, the first phase of Le Palamède’s existence coincided with one of the most coruscating of epochs in the history of French chess. In contrast, the magazine’s revival was obliged to cover what was predictably termed the Waterloo of French chess, by English fans. This was Howard Staunton’s overwhelming rematch victory against Saint-Amant himself at Paris in 1843, whereupon the sceptre passed from the French capital to London, and Simpson’s-in-the-Strand achieved its apotheosis as the grand home of British Chess.

Is the claim that Palamedes invented chess in any way plausible? Hidden in the answers to this question are some fascinating insights into the nature of myth and legend.

In Greek legend, after Paris abducted Helen and eloped with her to Troy, her brother-in-law, the Greek commander Agamemnon, despatched Palamedes to Ithaca, the realm of Odysseus, to persuade the ruler of the island to join the attack on, as Christopher Marlowe stylishly put it, “the topless towers of Ilium.” Odysseus had previously pledged to uphold the marital rights of Helen and Agamemnon’s brother, King Menelaus of Sparta.

Odysseus, however, had no intention of honouring his oath, so, when the recruiting officer fetched up on his shores, he feigned madness, by ploughing his fields with the deranged combination of ass and an ox, both yoked to the same plough. Of course, this reduced the operation to a chaotic farce. Palamedes, though, easily saw through the ruse and placed Odysseus’ son, the young Telemachus, in the path of the plough, whereupon Odysseus had to abandon the cunning deception, ceased his bogus work and thus involuntarily admitted his sanity. By means of this counter ruse, Palamedes forced Odysseus to sign up for the war against the wife-stealing Trojans.

Odysseus, apparently, never forgave Palamedes for exposing his trick to excuse himself from the Trojan War, and when Palamedes himself counselled the Greeks to abandon the siege and sail back home, Odysseus spotted his opportunity and struck him down. Concealing gold in Palamedes’ tent, Odysseus fabricated a missive, seemingly from the Trojan King Priam. The incriminating note was inevitably discovered, the Greeks accused Palamedes of treachery and he was stoned to death. According to other accounts, Odysseus and Diomedes (another Greek hero) drowned him during a fishing trip, while yet another version indicates that he was enticed into a well in the hope of finding treasure, and was then crushed by fall of stones. Palamedes is prominent in many accounts of the Siege of Troy, but Homer himself omits him entirely from The Iliad.

Ovid, Virgil, Plato and Euripides have all written about his fate, while in more modern times the outstanding Dutch dramatist, Joost van den Vondel, wrote “Palamedes” in 1625, based on the ancient Greek myths. The play caused unmistakable and topical political reverberations, the judicial murder of Palamedes representing the execution of the contemporary politician Johan van Oldenbarnevelt. Vondel excoriated this act as legalised assassination, with the guilt for Palamedes’s death being thrown squarely on the shoulders of the autocratic Agamemnon, a metaphor for the Dutch ruler, Prince Maurits of Nassau.

Sir Palamedes also enters records of myth and legend as a knight of King Arthur’s round table, a deadly enemy of Tristan, failed lover of Princess Iseult, slayer of the Questing Beast, friend of Lancelot and ultimately the victim of Gawain.

The fascinating element here is the way myths, legends and identifiable characters from the Trojan war, reappear in a Celtic, Irish and mediaeval guise. A startling instance is the parallel between the deaths of Agamemnon in classical myth and the death of Llew Skilful Hand in the Welsh epic The Mabinogion.

Agamemnon returns victorious from the Trojan War, only to be murdered in his bath by his wife Clytemnestra and her lover Aegisthus. The same fate befalls Llew, and both stories emphasise that the victim dies neither wholly on land nor wholly in water. Both also employ symbols of eagles and goats, the name Aegisthus itself having its root in the Greek for a goat.

The parallel, noted but not explained by Robert Graves in his epic work on Greek myth, is either an example of the incursion of such myths into other cultures, while assuming the outward forms consistent with the new host, or, and I think this more likely, that there must be an ancient proto myth originating further east, which has resurfaced in different forms. In this case it would be the tragedy of a mighty warrior, naked, unarmed, vulnerable, suspended in a limbo between the elements of earth, air and water and traduced by those he trusted most. Such a potent narrative might well have spread and taken root in a multiplicity of varied forms, such as the dramatic trilogy of Aeschylus which covers the death of Agamemnon and its consequences, and the Celtic wizardry of The Mabinogion.

As with the game of gwyddbyll from The Mabinogion, and Xiangqi advocated as the progenitor of chess by Needham, the claims of Palamedes, in whichever of his two manifestations, to have invented chess, have about as much credibility as various legends claiming that the Egyptian god Thoth invented draughts. Attribution of chess to Palamedes tells us more about 19th French veneration for the ancient classics of Greece and Rome, than it does about any identifiable and reliable evidence for how chess came into being.

With Palamedes relegated to the realm of the imagination, I conclude by focusing on the latest news from the world of chess. Unfortunately, The 2020 Candidates Tournament to determine the new challenger to reigning World Champion Magnus Carlsen has been suspended at the midway point, due to Covid-19. FIDE, the governing body for global chess, now seeks a new venue for the restart, which is expected to be spring 2021.

The sons and daughters of Palamedes are quite unaccustomed to fear and would probably resume combat in almost any location which volunteered its services and invited them to play chess. Might I, however, suggest that the ideal hosting nation would be Germany, a state which has spectacularly bucked the statistical trend amongst industrialised countries for coronavirus infection.

Why might this be? My explanation is that the Germans, unlike the French, Spanish and ourselves in the UK are notably proficient at obeying orders, including public health orders. German literature can even boast one play, The Prince of Homburg by Heinrich von Kleist, which glorifies obedience to orders from above, and another, The Captain of Köpenick by Carl Zuckmayer, which satirises that self-same German propensity for unquestioning adherence to the diktats of perceived authority.

Suffering far lower lethal levels of the pandemic than any other comparable nation, Germany seems to me to be the perfect location for the restart.

This week’s game is a brilliant victory by La Bourdonnais, founding editor of Le Palamède, and taken from his glorious series in London 1834. The French maestro certainly would have earned the right to call himself World Champion, had the thought occurred to him at that time. As it was, the chess fraternity had to wait for the advent of Wilhelm Steinitz (who was minus three years old at the time of La Bourdonnais’s triumphs) that Germanic Titan of order, method and obedience to strategic laws on the chessboard, until anyone actually claimed the title of World Champion on a public and official basis.