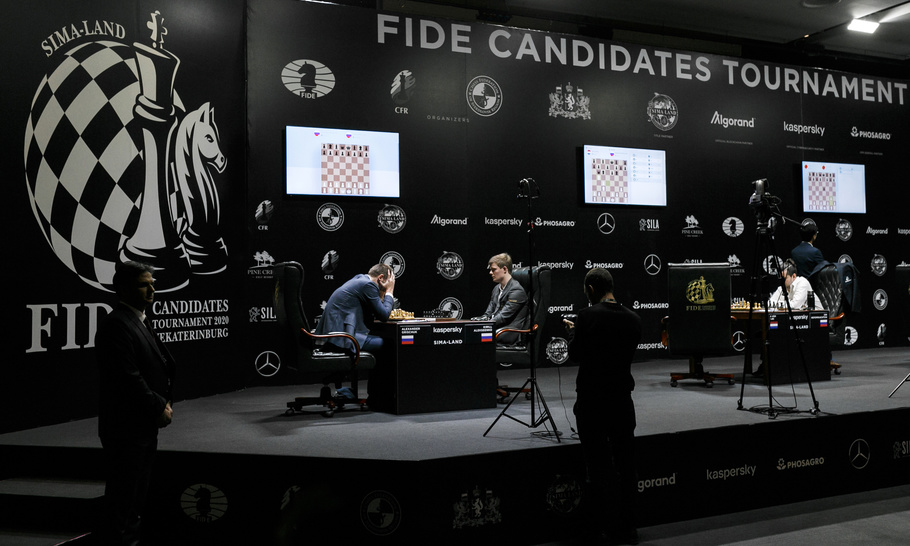 The World Chess Candidates’ Tournament in Ekaterinburg has been halted at the half-way stage. The stated reason was the cessation of all air travel to and from Russia, enforced as of yesterday. Had action not been promptly taken, the entire staff and players could have been marooned. It was, in fact, the only major sporting event in the world which had not been cancelled or postponed. Even the Tokyo Olympics has been shunted forwards to next year. Ekaterinburg was to have determined the challenger to the throne of the Champion Magnus Carlsen and it was, for its now truncated duration, probably the most health-conscious chess event ever staged.

As I mentioned last week, the eight aspirants were subjected to twice daily tests for infection from the Covid-19 virus, spectator numbers had been severely reduced, while the media had been largely banned from the playing hall. In a well-intentioned extra measure, devised to entirely eliminate contact between the press and the players, organisers also created miniature cardboard cutouts of the contestants for the photographers, but this somewhat risible strategy was, however, swiftly abandoned.

Most people present, apart from the players, were wearing facemasks. Meanwhile, the players themselves had ditched the traditional pre- and post-game handshakes in favour of awkward elbow bumps. As a result, according to one favourite, Russian Grandmaster Alexander Grischuk, the atmosphere in Ekaterinburg was so tense, uncertain and hostile that he had, even at a much earlier stage, called for the competition to be aborted, writing on Twitter: “It’s no coincidence that everything else is stopped. We’re the only major sport event in the world and I think it should be stopped and postponed.” Grischuk’s cri de coeur has now been answered

Furthermore, one member of the international cohort of Candidates, the previous World Title Challenger, US Grandmaster Fabiano Caruana, had presciently voiced doubts as to whether he would be allowed to travel home, once the tournament had concluded. There has now been a mass exodus to the airport before yesterday’s travel ban took effect.

Even without the coronavirus precautions which had been in force in Ekaterinburg, modern elite Grandmasters tend to follow a monk-like existence, based on the knowledge that smoking, drinking, and especially drugs, are all utterly inimical to the fully functioning operation of the human brain. Although smoking was, for example, once obligatory at Eton College, being regarded as a sovereign remedy against infectious disease, we all now realise its health drawbacks. Of course, smoking during official chess games is now absolutely banned. There was even a brief vogue by puritanically-minded zealots for trying to forbid coffee during games, on the specious grounds that caffeine is a prohibited stimulant.

This is all a far cry from the Bohemian past of chess champions. Not everything that is forbidden to monks is forbidden to chess players. Jose Capablanca (World Champion 1921-1927) was a noted charmer, and of course sex has not been eliminated from the otherwise austere lives of the current crop of “mental athletes”, as they like to style themselves.

Emanuel Lasker, World Champion from 1894-1921, was a philosopher and mathematician, who was friendly with Einstein. Lasker was, therefore, not an obvious candidate as a Bohemian, but he was notorious for smoking cigars during his games. So prevalent was smoking at chess tournaments, that the Red Czar of Soviet Chess, Mikhail Botvinnik (World Champion from 1948 on and off until 1963) engaged a training partner to blow smoke into his face during practice, with, for good measure, a radio turned on full blast to simulate distracting background noise in the competition hall. This was a clever precaution since, without exception, during the heyday of Soviet chess dominion, major chess championships would have been packed with thousands of excitable and noisy fans.

Grandmaster Harry Golombek OBE, several times British Champion, was once demonstrating to team-mates a win of which he was particularly proud. Up strolled an inebriated Alekhine, who without hesitation pointed out a vital improvement which Golombek had completely overlooked. This led Harry to the observation that a drunken Alekhine played better chess than a sober Golombek.

I also recall, when I competed alongside Mikhail Tal at the Hastings International Tournament of 1973/74, that I went to the hotel bar one evening after a hard day’s play to order a brandy. My modest request was thwarted when told by the barman: “that Russian gentleman“ (he meant Tal, who was in fact from the Latvian part of the Soviet Imperium) had consumed the hotel’s entire stock of brandy during a drinking session into the early hours the night before.

As to smoking, the Olympic standard was set by the Dutch Grandmaster Jan Hein Donner, who seemed to exist on a diet of black coffee (of which 90 per cent was heaped up white sugar) and hand rolled, chain smoked cigarettes. A new biography of the man described as the greatest Dutch contrarian of the 20th century, has just appeared, published by New in Chess.

At the 1973 match between England and the Netherlands, played in Manchester Town Hall, I drew my game on top board against the former Dutch World Champion (1935-1937) Dr Max Euwe. After we had finished discussing our game, I wandered over to watch the game on board two between Donner, a formidable player who had numbered both Boris Spassky and Bobby Fischer among his victims, pitted against ten-times British champion, Dr Jonathan Penrose.

The contrast with modern chess could not have been more marked.  At that time, smoking was permitted during play, and to accommodate the ash, outsize circular Bakelite ashtrays were placed on each table. Donner constantly refilled his sugar-fuelled black coffees, and backed up this stimulant with cigarette after cigarette, lighting each new one with the stub of the old and thereby building up a vast pile of half burnt cigarettes in the ashtray.

Eventually, the pile of ash increased to mountainous dimensions, it began to emit smoke itself, then burst into flames and caused the giant ashtray to crack into two. There was now, literally, fire on board! The two players seemed transfixed, horrified, and unable to react in this crisis.

Realising that urgent action was mandatory, during this temporary mental paralysis of the two combatants, I, with what I considered to be admirable presence of mind, seized Donner’s coffee cup and hurled the contents onto the flaming heap of ash, thus extinguishing the flames. Given the very high sugar content of the liquid, however, my prompt action had the effect of converting the conflagration into a thick, black, sticky, hot, steaming pyroclastic flow, trickling slowly across the table, but at least no longer threatening to consume Manchester Town Hall in flames.

As if emerging from a trance, Donner and Penrose looked up at each other, spontaneously, agreed the game drawn, fled from the scene and left me to explain to the janitor what had happened , before he set about cleaning up the liquefied mini-volcanic residue still smouldering on their chess table.

This week, a famous game from the ancient chess archives, played in the days when smoking, on this occasion of a pipe, was customary.