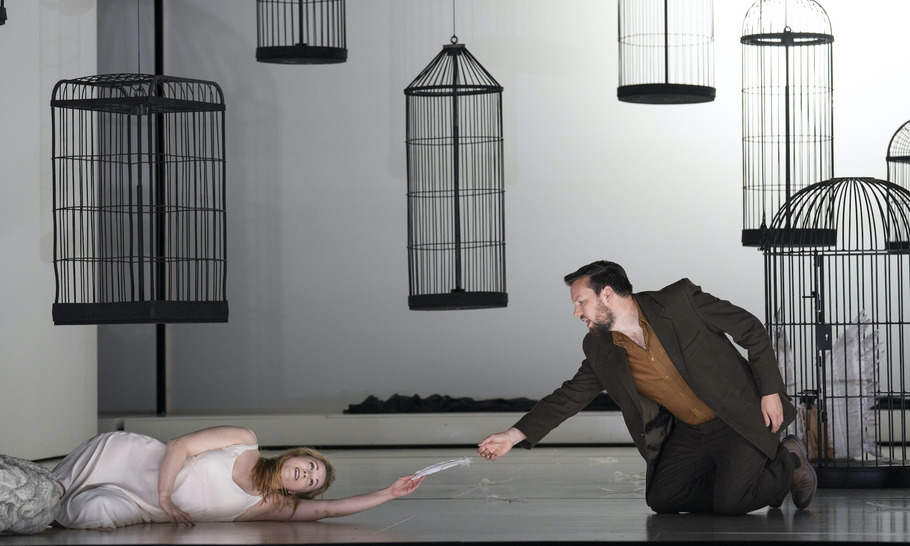 This week saw the opening of live performance in opera houses. Social distancing among performers still means massive stage choruses are out, and the Royal Opera decided to begin with Mozart’s late opera La Clemenza di Tito, which has only an off-stage chorus. Composed at the same time as his final opera (Magic Flute) but based on a half-century old libretto by Metastasio, this opera seria is a very static work. For reopening Covent Garden with a socially distanced performance to an audience of 800, rather than the usual 2,200, it was an understandable choice, but though the production by the talented Richard Jones conveyed the main ideas on a low budget, with care and precision in his placing of singers on the stage, it didn’t really work.

The story is driven by Vitellia’s ambitious scheming to become Empress, and the efforts of Titus’s friend Sextus to retain her love for himself. We first see Sextus (strikingly sung in short trousers by Emily D’Angelo) playing football during the overture, before ending up willing to burn Rome and assassinate Titus to retain Vitellia (strongly sung by Nicole Chevalier, but in a rather unflattering costume). In the meantime Titus fancies Servilia (beautifully sung by Christina Gansch), beloved of Annius (Angela Brower) who is willing to give her up to the Emperor, though she refuses his hand to stay with Annius. Love, honour, betrayal, but the Habsburg Empress Maria Luisa found it tedious and one prominent critic described it as “a most boring spectacle”. Edgaras Montvidas sang nobly in the tenor role of Titus, and Joshua Bloom provided excellent bass heft as Publius, prefect of the Praetorian Guard. Warm applause from the reduced audience, delighted by Mark Wigglesworth’s excellent conducting and only too glad to see serious singers performing on stage.

By contrast, the opener for the Glyndebourne season, Janáček’s Katya Kabanova was a vivid success in Damiano Michieletto’s new production. Michieletto was the director who offended the Covent Garden audience with his tiresome production of William Tell in 2015, redeeming himself soon after with an intriguing Cav and Pag, and this was terrific.

The crux of his production appears in an Act One duet between Katya and her adopted sister-in-law Varvara, when she sings of wanting to fly. Suddenly an angel with wings appears on stage, a clone of Prince Harry representing an underlying sexual dissatisfaction in her marriage and yearning for freedom from her dreadful mother-in-law. Later in Act Three she locks the angel in a cage, and it ascends with other empty cages to be suspended in mid-air until a coup de théâtre near the end. Trapped in a marriage with a mother-in-law whose cruel narcissism she can do nothing to appease, there is hope only in a marriage to the river god of the Volga in the last moments. This taut 1850s Russian drama by Ostrovsky is theatrically realised by Janacek’s idiomatic music and Michieletto’s thought provoking staging.

A fine season opener with Czech soprano Kateřina Kněžíková (pictured with David Butt Philip) as a beautifully natural Katya who elicits our sympathy with her evident care and attempted affection for a cold mother-in-law, sung with firm resolve by Swedish mezzo Katarina Dalayman. Her son, well portrayed by Nicky Spence, comes over as a tough-looking but entirely unsympathetic man under his mother’s thumb. Wonderful singing but a rather wooden stage presence by David Butt Philip as Katya’s admirer Boris, whom she meets surreptitiously when her husband leaves on a visit. This was a terrific cast that opened very strongly with Thomas Atkins as Kudraš, the schoolteacher, later joined by Aigul Akhmetshina as his girlfriend Varvara, foster child of the Kabanova household, and Alexander Vassiliev as Boris’s wealthy uncle who controls his inheritance.

The conducting by Robin Ticciati gave wonderfully clear expression to Janáček’s score and libretto, providing an opening night of rare emotional depth that inspired the reduced audience to cheers and extended applause, having already cheered Gus Christie at the start when he welcomed everyone back to live performances.