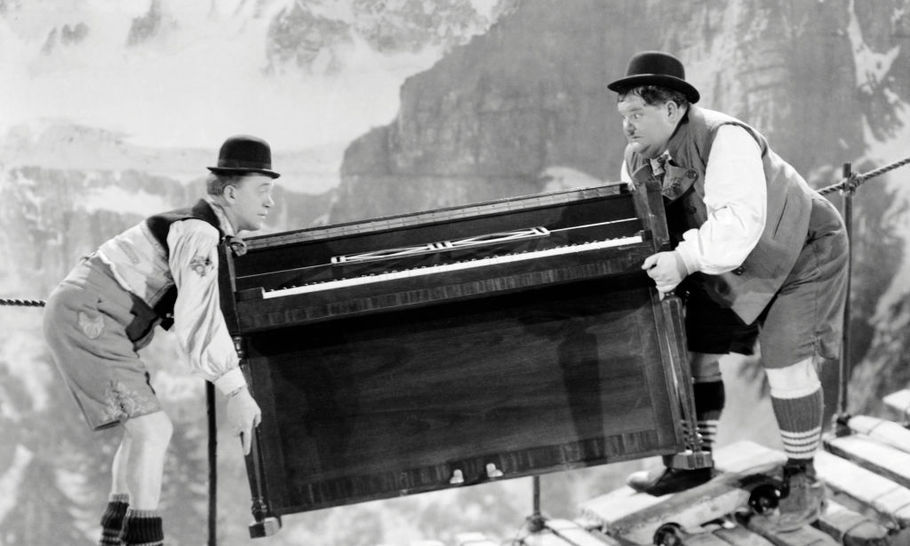 I won’t push the analogy with any greater force than that (at least not for now), save to say that when the piano eventually arrives, we can be sure that it doesn’t look like the world beating Steinway that left the warehouse. When it arrives, it will be out of tune. Assuming it ever does arrive.

At what point does it become apparent that we should not take any instruction from the guys in temporary charge of the piano? That maybe they’re not quite in charge of the situation?

There are genuine obligations of civil disobedience, some of which stem from the Bible. Despite some mischievous interpretations of Romans (13) the early Christian church was clear about that: worldly authority is to be accepted, but on condition that we bear witness to — and therefore subvert — specific laws which have been unjustly constituted. A government, St Paul insisted, can have divine legitimacy: it doesn’t mean you don’t have an obligation to challenge its specifics.

To put it in more secular terms, the proposition “it is a moral obligation to obey the law under all circumstances” is not axiomatically true. If it were, then we would have duties to any system of tyranny that could, dubiously, claim legal authority. To unreflectively obey the law because” it’s the right thing to do” is to abandon any critical evaluation of the justness of the law. Some laws are objectively unjust, even if the authority which issues them isn’t.

And if a law is unjust then the obligation to right any injustice must apply to that law.

A law can be unjust in two ways: because it is wrong in content, or because it has come about through a process which is, in itself, unjust. There is, needless to say, a natural tendency by which the latter results in the former.

The current cascade of Strangelove-like restrictions which emanate from the overactive pen of our Health Secretary are procedurally dubious. Under our dispensation, governments are not elected, they are formed. We have in our system a sort of constructive ambiguity: the executive and the legislature are both separate and yet comingled. MPs become Ministers to then become MPs again; it’s a very delicate constitutional balance.

This government has done violence against that balance. And, unfortunately, the legislature has acquiesced in its own emasculation. Six months ago, at a time of crisis, the Commons effectively abandoned its duty of scrutiny.

Since March, this government has introduced more than 200 statutory instruments under the aegis of the 1984 (yes, really) Public Health Act. This kernel of authoritarianism is the originator of our current restrictions, not the “sock puppet” Coronavirus Act which gave MPs the opportunity to pretend they were making a difference last week.

Like a child, the executive has pushed the boundaries of its authority and like one of those pathetic fathers who insists the child calls him by his first name rather than “Dad”, the legislature has failed to push back.

There has to be some mechanism of legitimate pushback when a government has lost its way. Not least for the sake of that government itself. Like the child with the inappropriately friendly parent, this government has not benefited from appropriate scrutiny. It now doesn’t know how to get out of the mess that it has made for the rest of us. And for itself.

Since March, there has been a separation between government and legislature which has made the “instructions” to the rest of us a form of diktat. We don’t, in this country, live by statutory instrument. We live in accordance with the common law.

The government has been mind-captured by a collection of establishment scientists who seem to be in thrall to the inevitability of a viral Apocalypse. Unfortunately, our MPs seem to be similarly in thrall to ideas of personal advancement. So, they won’t — with a few honourable exceptions — challenge that.

So, it’s down to us. The next time a Minister — even one as endearingly charismatic as Matt Hancock — leans into a TV camera and announces that “this is now the law”, why not put it to the test? The “test” in question being the one that we put to him.

There are natural ways of living that this government is stamping on. If we don’t find ways of pushing back then the spirit of this country, already in peril, will be quashed.

There is a very nasty virus out there. It can’t be defeated, but it can be accommodated. The way to accommodate it is by reclaiming from the government our personal rhythms of assessed risk.

If that means a lively but responsible disregard for “rules”, then so be it. I’ll be having seven for Christmas dinner. Small steps.