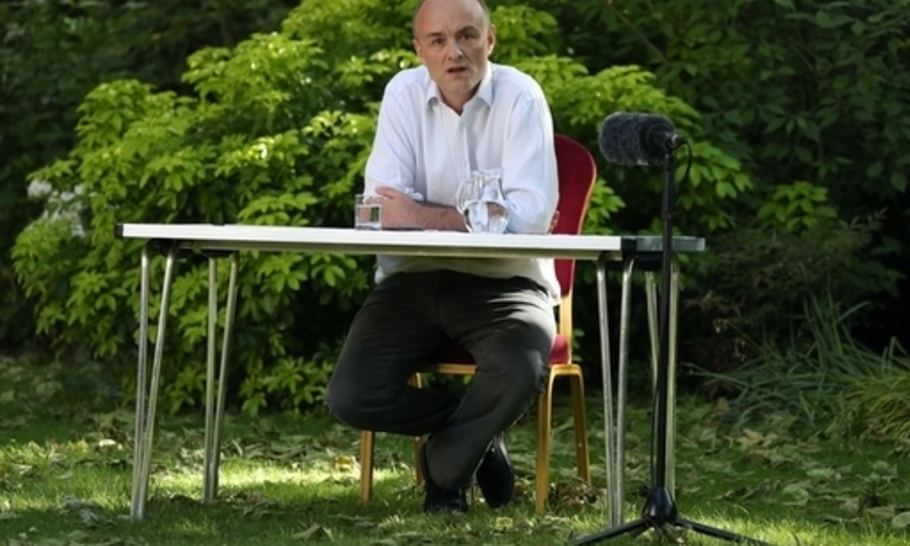 So the Telegraph, the Express and the Sun are united in pretending that Boris Johnson’s so-called lockdown easing plans were the big event yesterday.

The Sun leads too on “OPEN FOR BUSINESS,” and its spin on Dominic Cummings — for spin is what it is — was that “I did what was right for my family and my country.” So not only were those who abided by the rules bad parents; we are also deeply unpatriotic.

“UK edges back to normality,” splashes the Telegraph, after about as abnormal a day in our political life as you could imagine.

Away from the London political/media elite axis, a few snapshots from elsewhere in the world. New Zealand Radio, whose first question when I did an interview last night, began: “We are sitting here watching what is happening in your country with absolute incredulity…” Doha, where the Al-Jazeera presenter seemed as shocked as I was at just what a mess Johnson was making of things.

Dublin, where the veteran radio presenter Pat Kenny, who two weeks ago suggested to me Johnson had “blood on his hands” on account of the grotesque indifference and incompetence that has helped kill tens of thousands. Pat could not understand the hold Dominic Cummings had on his boss, which made him blind to the damage he was doing to his own government.

France, where an interviewer asked me simply: “What is wrong with the United Kingdom that all we see is chaos?”

Johnson’s risible press conference on Sunday, in which he sought to defend the indefensible, was bad enough. Yesterday was even worse.

First Cummings, the man who supposedly had his finger on the pulse of the nation, who genuinely seemed to think that his setting out the facts as he saw them helped his case when in fact it destroyed it. He confirmed the central allegation against him — that he defied “stay at home” advice to drive to Durham, while offering no “exceptional circumstances” beyond a worry that some people didn’t like him and might protest at his house. He admitted that he had left the property in which he was staying to go to a hospital to collect his wife and son and also admitted he had driven to Barnard Castle, but only as an eye test. He also revealed that Johnson had known for weeks he had broken the lockdown rules.

I could go on and on. However, I do want to focus a little on the attempt he made to suggest that personal security was the reason he felt he had to head north. As my daughter was reminding me last night, when she was a young child she sometimes had to fight her way through anti-war protesters outside our house as she went to and from school. Not nice for her or her brothers, or for me and her Mum.

Though I am sure that Cummings has been on the receiving end of a bit of abuse here and there, I have never seen anything remotely resembling a hostile public presence outside his house, apart from a few people shouting at him about hypocrisy the other night. Even then he seemed happy enough to stroll along his street unprotected.

Also, with the country in lockdown, and most decent law-abiding people observing it, I think the risk to London Dom would have been pretty low, and certainly didn’t require him to become Durham Dom.

Anyway I have written to the Metropolitan Police to ask if there is any record of Cummings expressing security concerns in the days running up to his flit. I suspect they will have nothing. It is just one more lie, one more excuse. It is what he and Johnson do.

If Cummings has or had any genuine security concerns, I am sure he has access to the same Home Office branch, the Central Unit, that gave me support when working in Downing Street. They were very professional, and helped me and my family through a number of tricky periods — Kosovo, Iraq — which is when the protesters were out. Also, after the Good Friday Agreement was reached, the threat was assessed as significant, and — how was this as something to put the wind up your family, Dom? — I was told that as the Prime Minister was so well protected inside Number 10, and always on the move, there was a risk dissident Republicans would go “one layer out”, with me and chief of staff the likeliest targets. In came the men in black to do all manner of things to the house but hey, guess what, we didn’t go and stay with Mummy and Daddy, Dom.

Having people shout at you from time to time is sadly just part of the territory if you have a political profile. The idea that the level of protest Cummings has attracted would merit moving house, frankly, is absurd. And what an insult, that the clause in the Coronavirus Bill Cummings is relying on to plead exceptional circumstances for his son, was there to protect children with genuine safeguarding issues, like fear of abuse, and women in particular at risk of domestic violence.

It was all very Trumpian yesterday. Johnson screws up Sunday. Cummings goes out to “clear it all up,” only he doesn’t. But then Johnson pretends that he has, and shuts down all questions, refuses to engage on detail, and hopes people will buy the line, along with the right wing rags, that yesterday’s news on markets and retail was driven by science, not the spin of a desperate, amoral man. To be fair to the Mail, a paper I have despised for many years, they are refusing to insult the intelligence of their readers, because they know their readers will be angrier than most about the lies and the hypocrisy.

Johnson and Cummings are not just venal but utterly incompetent — even when they had been locked away for days concocting the story, they couldn’t get it straight.

Cummings said he was not ill on the day he left London. He had to say this as, if he had been, he should have stayed at home. His wife called him at work because she felt unwell. He went home to check on her and then went back to work. He was at pains to say that she did not have Covid symptoms (she had thrown up and felt dizzy, no cough, no fever). He had to say this because if she’d had Covid symptoms then he should have self-isolated immediately and not returned to Downing Street and put others at risk.

So here is the thing. On the basis of that, they didn’t have Covid symptoms when they left. Yet what did Johnson say on Sunday? “Today I have had extensive face to face conversations with Dominic Cummings and I have concluded that in travelling to find the right kind of childcare, at the moment when both he and his wife were about to be incapacitated by coronavirus, and when he had no alternative…”

But then so much of his and Johnson’s performance yesterday was an insult, and so much of it absurd; nothing perhaps quite as absurd as that notion that the way to check if your fuzzy eyes are up for a long drive is to go for a short drive to test it. That was the point at which I spotted Gary Neville’s tweet that this was “the most uncomfortable I have seen an Englishman at a press conference since a 7-0 defeat in Barcelona.” (And while I am on Sky Sports pundits, check out David “Bumble” Lloyd, Accrington Man — now there is someone who knows what people in the famed Red Wall think.)

Then there was Johnson last night, thinking his after dinner circuit gimmicks still held appeal, getting his glasses out to say the virus had affected his eyesight, and he needed specs for the first time in ages, appearing to endorse the idea that driving was a good way to test your eyes. This is the same Johnson who said in 2014 he was “blind as a bat” and couldn’t even walk round the house without wearing glasses. Lying then? Lying now? Both? Who knows. We have a post-truth Prime Minister, and it is one of the reasons our reputation, as I discovered in those interviews last night, is collapsing, and one of the reasons these charlatans cannot be swept away a day too soon.