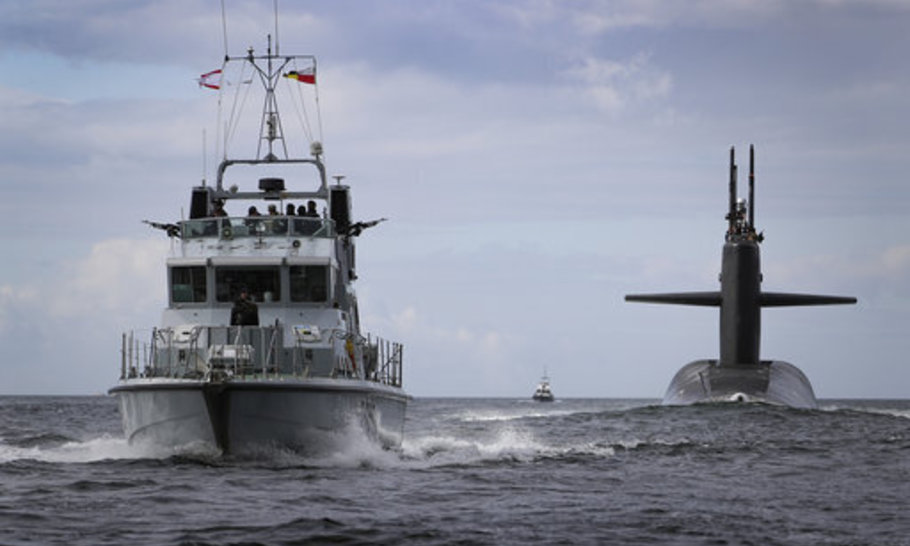 Two news stories emerged around the Ides of March this year. The first about a project near Whitehaven in the Borough of Copeland in West Cumbria. The second about developments on the Clyde, of special interest to residents of Argyll and Bute. Both in their different ways had implications for the future of the planet. Both also illustrated the delusional quality of current ideas of national sovereignty.

The first, you may have guessed, was about Woodhouse colliery, a project of West Cumbria Mining owned by the Australian Company EMR Capital. In 2019, Cumbria Council granted planning permission for the first deep coalmine since 1987 to extract from under the Irish Sea an estimated 3.3 million tons of high quality coking coal used in steel manufacture. The colliery is expected to produce carbon emissions equivalent to that created by a million households, per annum, and is worryingly close to Sellafield nuclear power station and pockets of undersea methane. Such a granting of permission is difficult to square with Britain’s commitment to reach net-zero emissions by 2050 and the Paris Treaty to limit global warming to below two degrees above pre-industrial levels.

Not surprisingly, with the COP26 International Conference on Climate Change in Glasgow chaired by Boris Johnson in the offing, the Woodhouse colliery decision caused considerable controversy. Keep Cumbrian Coal in a Hole, a campaigning NGO, threatened a legal challenge. South Lakes Action on Climate Change (SLACC), a community-based environmental charity, was thinking along the same lines. The local controversy was breaking as a national story.

Then the project bounced up to the Secretary of State for Housing, Communities and Local Government, Robert Jenrick. Not noted for trouble-free decisions, he pushed the decision back to Cumbria County Council. Though hardly an issue on a par with how often the bin men would visit, it would be for the County Council to decide. There were new jobs at stake in Whitehaven, and in Teesside —  from where 80 per cent of the coal was going to be exported (so the emissions would not count as Britain’s) — the need for 6.6 million tons of coking coal imported from Australia and the US would be reduced.

Enter the US Special Envoy on Climate Issues, 2004 Presidential candidate, John Kerry, on a visit to Europe. Post-Trump, the USA was very much back in the game when it came to limiting climate change. Kerry made it abundantly and volubly clear that Woodhouse colliery was a non-starter. The Conservative mayor of the Borough of Copeland, Mike Starkie, fought back. “I take no lessons from John Kerry”, he said “given that the UK is miles in front of the States in the reduction of the use of coal for fuel”. This was a misunderstanding of the situation. On 11 March Mr. Jenrick “called in” the planning application, he would hold a public enquiry, the West Cumbria mine would be kicked into the long grass, or rather the long seaweed. For HMG’s principled decision read HMV, His Master’s Voice – coming from Washington.

The second such story, all true Scots will have spotted, was the announcement within the Integrated Defence Review released on 16 March 2021 that the slow build-up in the Royal Naval Armaments Depot of nuclear warheads for the submarines at Faslane on the Clyde was deliberate. Britain, we were informed, was changing its self-imposed cap of 225 nuclear warheads to a new cap of 260. Its current target for reduction of nuclear weapons to 180, by the mid-2020s, was presumably abandoned, a worrying volte-face for the post-Cold War period. The decision just happened to coincide with the lobbying of Congressional Committee leaders by the UK Secretary of State for Defence, Ben Wallace, over funding approval for W93, a new US warhead programme. The nuclear proliferation team in Royal United Services Institute, (RUSI), not famous for leftist rhetoric, described this “coincidence” in Going Ballistic: The UK’s Proposed Nuclear Build-Up as “a clear indication of the degree of UK dependence on [the USA’s] programme”. In other words, our independent nuclear deterrent was becoming even less independent. And our future nuclear deterrent is viewed, at least in design terms, as a joint project.

The point is that the first task of a state — the security of its citizens, supposedly based on nuclear deterrence — is shared with, and is becoming more controlled by, another state. If this doesn’t amount to sharing important aspects of sovereignty, what does?

In the mid-2000s Britain led the world in methods of verification of nuclear disarmament and non-proliferation. To quote RUSI, our volte-face on nuclear weapons is “unequivocally damaging to diplomacy”. It also makes the “use of low-yield weapons more possible”, a clear and present danger in the context of conflicts such as that in eastern Ukraine. In short, we left the EU only to become, inevitably, more dependent on the US.

Worse, the Prime Minister has a penchant for Trump-lite policies: breaking international law, damaging the soft power of British diplomacy and development, toying with a British form of culture wars , playing elites against people, sacking top civil servants and arousing the sectarian demons of Northern Ireland. So the current influence of the US may not be such a bad thing. Importing some of Biden’s climate change vision, commitment and integrity may be salutary, as Kerry demonstrated. But the moral is we must give up the consoling claim to “punch above our weight”. As a state we have been losing weight for many years. We must also leave behind the fantasy of “take back control”. In a globalised world the best, indeed the only, realistic way to control our destiny and “punch above our weight” is within strategic alliances. And that requires some degree of shared sovereignty.

The basic snag with presenting national sovereignty as the exercise of some kind of glorious, autonomous agency is that it flies in the face of reality. National sovereignty requires “sovereign capability” — which for better or for worse we, like most other nations, now lack in several respects: we don’t feed ourselves and we certainly do not rule the waves. It is time we rejected the infantilism of Boris Johnson and developed some historical, corporate self-knowledge and purposive strategy for the future. By the next Ides of March the knives may be out.