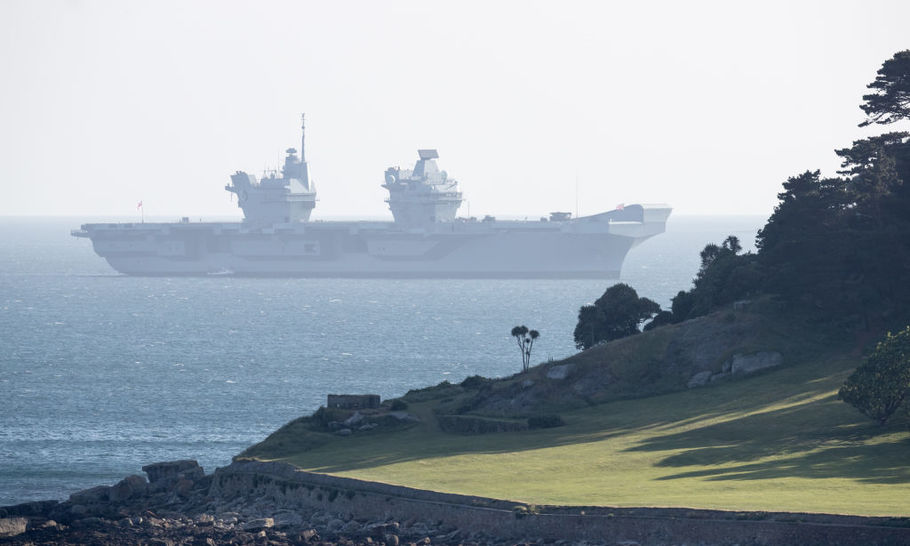 The largest warship that has ever sailed under the Royal Navy’s White Ensign is to be based in the Far East, there to join the Allied deterrent against Chinese aggression. The aircraft carrier HMS Queen Elizabeth, whose crew is still undergoing training at sea, will begin her first mission early next year with a maiden voyage that will bring her close to the most disputed waters on earth: the South China Sea. The duration of her deployment is unknown, but she is likely to visit the naval bases at Singapore, Okinawa and Darwin.

For the past half-century, Britain has not had a permanent military or naval presence “East of Suez” — as the post-imperial jargon had it. During the Cold War, the main threat came from the Soviet Navy and the North Atlantic was necessarily the main focus of British naval strategy. Policing the Pacific and Indian Oceans was left largely to the US Navy, apart from occasional limited missions, such as protecting shipping against East African piracy. Without the network of bases that the Empire had once provided, it was axiomatic that surface vessels could not operate far from home for long periods; the Falklands War in 1982 was the exception that proved the rule.

However, the rise of China as an economic, political and military superpower has altered western calculations. Beijing’s expansion in the last decade has sent shockwaves through the region — and beyond. The ideology that is driving Chinese policy is not only nationalist and communist, but imperialist.

The response has been striking. US sea power, which had been allowed to decline, is now once again returning to full strength. Despite a series of embarrassing incidents — the latest being the fire on board the USS Bonhomme Richard, an amphibious assault ship based at San Diego — the US Navy remains an essential part of the Western security infrastructure that underpins global peace and prosperity. The Pax Americana of the past 75 years, which we often take for granted, ultimately depends on the readiness to use force against those who disrupt it.

It is good that the UK is to play a full part in the strategic containment of the multifarious threats emanating from China. But history suggests that we should be careful about exposing our capital ships to a formidable opponent, especially in the Far East. Before we dispatch Queen Elizabeth to a region where she will be placed in harm’s way, a brief reminder of the lessons of the past might not come amiss.

Until the end of 1941, the Second World War was still mainly confined to the European theatre. Even after the Nazi invasion of the Soviet Union, the United States remained neutral. However, the threat from Imperial Japan was a constant concern in London, Moscow and Washington.

We now know that Stalin was in fact much better informed about Japanese intentions than either Churchill or Roosevelt, thanks to the espionage network in Tokyo created by a Soviet spy, Richard Sorge, posing as a German journalist. The Russians were aware that Japan would strike at the Western powers, not at their own exposed Siberian border, and were thus able to move forces westwards that proved decisive in the Battle of Moscow.

The Americans wrongly assumed that Japan was incapable of sending a task force across the Pacific and did not anticipate the daring surprise assault on Pearl Harbor. The British realised that their colonial possessions were vulnerable to a Japanese Blitzkrieg and sought to deter it. But they too laboured under the illusion that their main naval base, Singapore, was so strongly defended that it could withstand any seaborne assault. It was therefore seen as a secure port from which to deter Japanese aggression. But a strong British naval presence was also required to intercept an invasion of the Malayan hinterland.

Hence Churchill’s decision in the autumn of 1941 to send to the Far East the new battleship Prince of Wales, one of the most powerful warships afloat, and the elderly but elegant battlecruiser Repulse. Prince of Wales was already famous for having engaged the German battleship Bismarck and for providing the backdrop to the signing of the Atlantic Charter by Roosevelt and Churchill. The Prime Minister, who was also First Lord of the Admiralty and thus responsible for naval operations, had wanted the two capital ships to be accompanied by a fast modern aircraft carrier to provide airborne protection, but after Indomitable ran aground, none could be spared from the Atlantic and the Mediterranean. The older carrier Hermes, which escorted Prince of Wales as far as Cape Town, was too slow to be fit for the Far Eastern mission.

It is worth recalling that 1941 was the worst year for the Royal Navy in either world war. That year the battleship Barham, the battlecruiser Hood and the aircraft carrier Ark Royal had already been sunk by the Germans, not to mention smaller warships. Other capital ships were damaged. But the worst was yet to come.

Churchill had overruled his most senior admiral, Sir John Tovey, by insisting on the despatch of Force Z, as the Prince of Wales and Repulse plus escorts were designated when they arrived in Singapore on 2 December, 1941. Their commander, Sir Tom Phillips, fatally underestimated the Japanese enemy. He was unaware that Admiral Yamamoto, the mastermind of Pearl Harbor, had trained a special air force of “ship-killers” to cover the amphibious invasion of Malaya — the first land-based bombers to specialise in naval warfare. The high-tech anti-aircraft and radar systems with which the flagship Prince of Wales was equipped were disabled by the climate. Nor did Phillips ensure that Australian fighters were aware of his position to provide cover. When he sailed on 8 December, he had only one purpose: to disrupt and if possible destroy the Japanese landings in Malaya. Meanwhile the US Pacific Fleet was being devastated at Pearl Harbor.

Before Phillips could make contact with the Japanese convoy or the two battleships sent to escort it, he aborted the mission when he realised that Force Z had been detected. Before he could return to Singapore, however, he reversed course after learning that the invasion of Malaya was under way. On the morning of 10 December, his ships came under sustained attack from the air. Despite displaying superb seamanship — Repulse alone dodged 19 torpedoes before she was hit — and shooting down four aircraft, Force Z did not stand a chance. A squadron of RAAF Buffalo fighters arrived just too late. The two mighty warships, battered by bombs and torpedoed four times apiece, both sank with the loss of 840 men, including Phillips. It was one of the worst defeats the Royal Navy had ever suffered. After receiving the news, Churchill commented: “In all the war, I never received a more direct shock.”

Lest we forget, it is worth recalling that the sister ship of HMS Queen Elizabeth, still undergoing trials, bears the name HMS Prince of Wales. If either of these great aircraft carriers is to deter the Chinese from further aggression in the South China Sea and beyond, they will need protection of a kind that only the United States can provide. The threats today are different, of course, but it would be folly to expose our carriers to the fate of Force Z. Otherwise we risk repeating one of Churchill’s most fatal strategic errors.