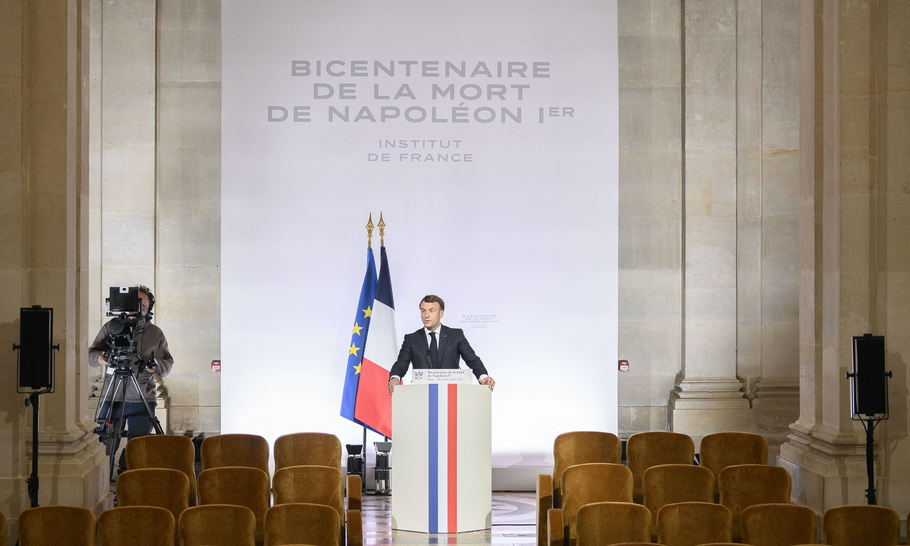 President Macron at the Academie Francaise, May 5, 2021 (PA)

It is a bold politician who invites comparisons of himself with Napoleon Bonaparte. Yet Emmanuel Macron has never been shy of self-aggrandisement. Yesterday the French President seized the opportunity presented by the bicentenary of the most renowned of all his compatriots to launch his own campaign for a second five-year term.

In a suitably august setting — the Institut de France, dedicated by the Emperor to the “Immortals” of the Academie Française — Macron hazarded controversy by invoking the Napoleonic myth, “this part of France that conquered the world”, as an inspiration to contemporary France — and as his own role model. “The life of Napoleon is an ode to willpower,” he declared. “We like Napoleon because his life has a taste of the possible, because it is an invitation to take risks.”

Macon is indeed a man who likes to take risks — and he took one yesterday by excelling himself with rhetorical excess. Like the Emperor, to whom he bears a passing physical resemblance, Macron broke the mould of French politics when he rose four years ago to become the youngest President of any of the five Republics. Yet Napoleon was even younger: just 30 when he became First Consul in 1799 and 35 when he crowned himself Emperor in 1804. It is, of course, impossible for a mere civilian to compete with the exploits that held Europe in thrall for almost two decades — and Macron is no hero to the French military. Only last week, a potential putsch by disaffected officers was thwarted — a plot that the President has ignored, just as he passed over in silence the fact that Bonaparte seized power in a coup d’état. For better or worse, Napoleon left his mark on the history, society and laws of an entire continent and far beyond; Macron has yet to accomplish anything that could compete with this “warrior, strategist and builder”.

A man of the centre-Left, Macron’s passionately patriotic address was a naked appeal to the centre-Right voters who will decide next year’s election. While acknowledging the Leftist critique of the Napoleonic legacy by conceding that the bicentenary should be a nuanced “commemoration” rather than an “exalted celebration”, Macron insisted that “cancel culture” was an Anglo-Saxon import, utterly alien to the French sense of history. Claiming to speak on behalf of the nation — “what brings us together is the fight against ignorance” — he deplored “those who want to wipe out the past because it does not correspond to the idea they have of the present”.

Yet Macron himself is riding a wave of revisionist historiography. After the humiliation of defeat and occupation, French historians turned away from heroes and instead focused on impersonal forces, abstractions and structures: economics, geography, class, gender. In recent years, however, a few have rediscovered the great man as the engine of history. Patrice Gueniffey’s Napoleon and De Gaulle: Heroes and History (Belknap Press, £28.95) is a good example of the genre. (My review for Law and Liberty can be read here.) Macron, who delivered his tribute yesterday before an audience that included the cream of French intellectuals, is harnessing this new Zeitgeist for his own political and ideological purposes. He, too, aspires to the heroic stature of his predecessors, the legendary talismans of the romantic imagination, above all the saviours of France, from Joan of Arc to Charles de Gaulle. Napoleon sacrificed six million lives in a global conflict before he met his Waterloo, but in Macron’s eyes he “gave substance to our political organisation and administration and gave form to embryonic sovereignty”, thereby fulfilling the unfinished work of the French Revolution.

Macron evidently sees himself as a comparable man of destiny, although he has yet to define precisely what that destiny is. His own unfinished task is, perhaps, the transformation of the European Union into a superpower that can stand up to the United States and China. How, though, does that square with the assertion of French sovereignty? Ever since the formation of the EU, this tension between Europe and the nation state has divided French opinion. Macron is firmly on the European side of that argument, but like Napoleon and his other hero, de Gaulle, he insists that Europe can only unite under French leadership.

Napoleon consciously created his own myth. It has been exploited ever since, not only by the leaders of France but also by her enemies and allies. When, after the fall of France, Hitler paid his respects at the Emperor’s tomb in Les Invalides, he declared that it was the proudest moment of his life. Just four years later, Winston Churchill bowed his head there and said: “In the world there is nothing grander.”

Yesterday Macron, too, stood in the same place to genuflect before the imperial sarcophagus. He came, he saw, but will he conquer? Patriotism is a powerful weapon, but nobody has a monopoly on the sentiments that it arouses. It will only work for Macron if he can succeed in wrapping himself in the myth of Napoleon without the pathos of his patriotism degenerating into bathos. France has never ceased to love la gloire, the lingering glory of her past triumphs, but she can fall out of love with her leaders all too easily. Emmanuel Macron desperately wants to be seen as un homme serieux — and so he is. Mais vous n’êtes pas un Napoléon, Monsieur le Président.