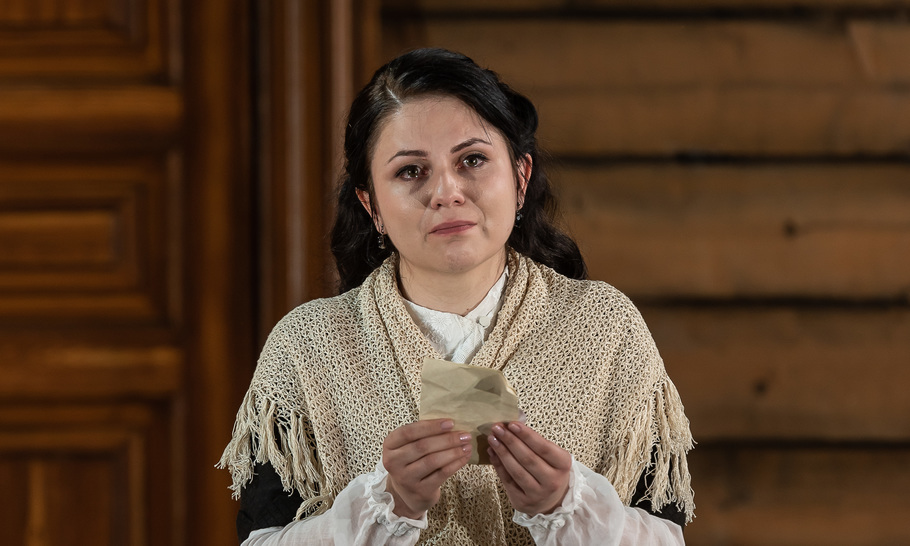 In Pushkin’s original verse novel, published in the 1830s, the young Tatyana occupies an essentially equal role to Onegin himself. This was an unusual feature in Russia at the time, and Tchaikovsky’s 1879 opera — his most popular — gives even more weight to the heroine.  Appropriate, then, that the strongest singers in this performance at Garsington were the women.

Moldovan soprano Natalia Tanasii was a terrific Tatyana. Her clear-voiced impetuosity in the letter scene turned to regretful resolve to follow her duty as the beautiful and intelligent wife of Prince Gremin, when Onegin reappears years later. Ms Tanasii well exhibited Tatyana’s solitary bookishness from the start, in stark contrast to the brilliant performance of British-Singaporean mezzo Fleur Barron as her more frivolous sister, Olga. Ms Barron was superb both on and off the ball, as they say in football, her facial expressions  and seductively flippant bearing speaking volumes. When her betrothed Lensky shows fury with his friend Onegin for dancing with her, it is clear that his exasperation is really with the  delightfully flighty Olga, whom he suddenly sees in a new light. Sam Furness, in a rather  unpoetic portrayal of this poet, stood his ground with determination. While Jonathan McGovern as Onegin showed appropriate world-weariness and vulnerability in the second half,  he lacked the urbane cynicism and arrogant charm that should characterise his earlier appearances.

This new staging of the 2016 production under Covid guidelines saw the audience reduced by half, but since the management expanded the orchestra pit last year there is room for 45 players, even accepting social distancing requirements. With these forces conductor Douglas Boyd gave Tchaikovsky’s glorious score a sensitive interpretation, showing great care for both the tempi and the singers.

Among other roles, Ossian Huskinson made an imposing and firmly voiced Zaretsky, Lensky’s Second in the duel scene, Colin Judson as Monsieur Triquet sang the praises of  Tatyana at her birthday party in the country with effective sycophancy, and Yvonne Howard and Kathleen Wilkinson were perfection as Madame Larina and the nursemaid Filippyevna. In his panegyric to the joys of love and marriage later in the opera, Matthew Rose as Tatyana’s adoring husband Prince Gremin sang eloquently, but lacked warmth.

The production by director Michael Boyd was in period costume, but there were aspects that did not quite fit the elegance of the period. When Tatyana enters the St Petersburg ballroom with her husband in the final act, she gracefully meets other dignitaries, such as the Spanish  ambassador, compelling Onegin to realise that the young girl whose entreaties he once rejected is now a beautiful and accomplished lady of some standing. This particular moment did not come over well, and Tatyana’s colourful peasant headdress was out of place, though presumably it alluded to her earlier life in the countryside when she made advances to Onegin. Productions these days always include some oddities, and here we see the ghost of Lensky returning and dancing with Onegin in Act Three, before later lying prone on the dance  floor. Yes, indeed, Onegin regretted killing his friend and only Lensky’s stubbornness compelled him to fight the duel, but neither Pushkin nor Tchaikovsky required a ghost. Still, this was a musically enjoyable Onegin and the female cast was outstanding.