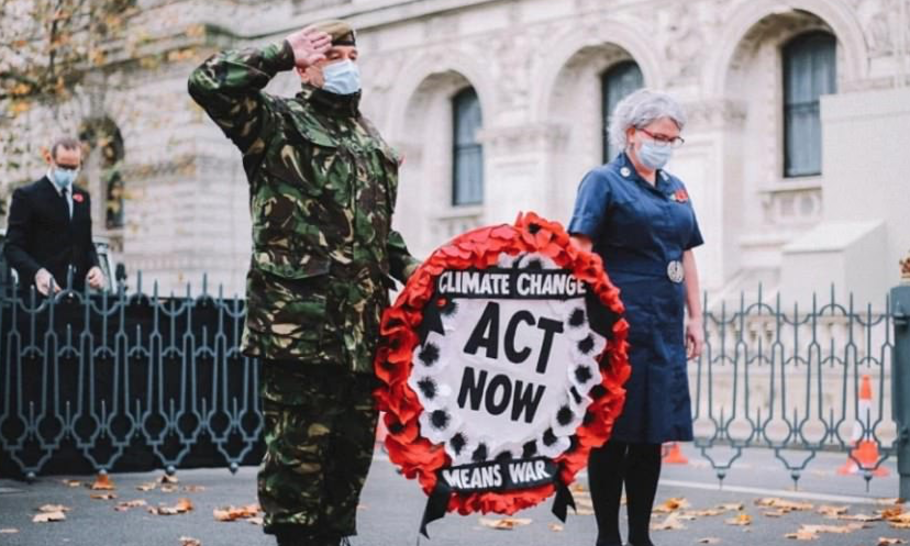 It’s often students and young people who are at the forefront of activism, paving the way for the political agenda of future generations. But that was not the case when 64-year-old Donald Bell led a climate change protest at the Cenotaph, just hours before Remembrance Day ceremonies began. The rules are changing — even for those who want to break the rules.

Extinction Rebellion was responsible for the protest. The radical environmentalist group has become renowned for civil disobedience and disruption. Their demonstrations usually include a shock factor to gain the attention of the public: splashing the Treasury with fake blood, blocking streets and bridges, playing dead at London Fashion Week, to name a few.

In their latest stunt, Extinction Rebellion attempted to attach themselves to Remembrance Day and hijack the commemoration for their cause. Their stated reason for targeting Remembrance Day is a feeble one – that Ministry of Defence reports suggest that climate change will lead to war in the future. On that basis, they claim, it is acceptable to demonstrate when people gather at a war memorial. Such an act pushes far beyond the limits of acceptable protest. Civil society must set boundaries.

The public response to these demonstrations seems to provide hope. Extinction Rebellion’s actions have been widely condemned. Such condemnation is different to that of many previous Extinction Rebellion protests. All sides of the political spectrum have come out against the action. The usual accusations of destruction and disruption are nowhere to be found. In its place is a question of respect.

The purpose of Remembrance Day is to commemorate all those who have lost their lives fighting for their country and the freedoms which we have today. These are the freedoms which allow Extinction Rebellion to protest. There is no place for ideology. It is gravely disrespectful to those to whose memory the day is dedicated. Any demonstration detracts attention from those soldiers and others who have given everything for us.

Protests are a healthy part of democracy. They demonstrate the importance of their cause to the public at large. They allow the agenda to be altered and a debate to be had. In the short term, they signal that there is discontent and that the status quo will not be accepted any more. But social media has made it easier than ever to organise mass gatherings, leading some activists to worry that these alone are not enough. Something different is required to catch the attention of the public. Usually, this requires pushing a boundary.

The Extinction Rebellion Cenotaph stunt is not the first time a protest has gone too far this year. Both the frequency and the magnitude of protests have risen, culminating in a socially turbulent 2020. Across Europe and America, we have seen enormous protests for a range of causes.

The decision to protest during a pandemic was a controversial one. With people unable to attend weddings, funerals, and even chemotherapy treatments, it seemed unfair to allow millions to take to the streets and march en masse – especially when some protests seem to be treated differently to others.

During this year’s Black Lives Matter protests, over 210,000 people attended demonstrations across the country even during lockdown. Such action was not shut down, despite gatherings of more than six people being illegal. More recently, anti-lockdown protestors attempted to create a “Million Mask March” in central London. They were repeatedly told to go home and that they were breaking the law. Over 104 people were arrested, despite there being far fewer protestors gathering.

What differentiated the two? Arguably it was the former that posed the greater threat to the health of the nation. Now that Covid-19-related deaths have surpassed the 50,000 mark, the  authorities may be less lenient towards activists, but the severity and popularity of the issue is also a factor. After the death of George Floyd, issues of racism and police brutality were taken extremely seriously. Public support for the Black Lives Matter movement was considerably higher than support for anti-lockdown measures.

Another questionable tactic is looting. During the Black Lives Matter protests, there were cases of protestors smashing windows and looting shops. Some of these were small, independent, black-owned businesses. Such “activism” by protestors proved detrimental to the cause, especially in the US. It was not an action condoned by the official Black Lives Matter organisation, but it still damaged the public perception of the movement as a whole. The withdrawal of public support may slow, if not halt, the momentum of a movement.

Just as protestors are critical of the status quo, so society must be critical of their methods to avoid threatening the validity of the act of protest. Public support is integral to the success of activists in the long run, and the Extinction Rebellion Cenotaph protest has shown how damaging an impermissible stunt can be to a movement. Boundaries are constantly changing, as they should. It is imperative, however, that we remain critical when radical movements like Extinction Rebellion go too far. We can acknowledge wrongdoing by well-meaning activists while remaining aware of the issue that they are raising.