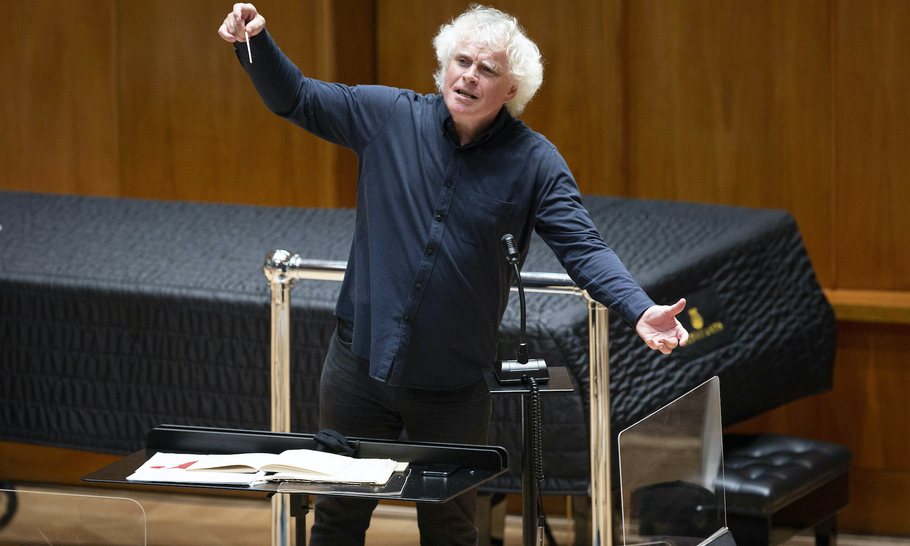 His is the face of classical music in our time. The mane of curly hair — now white but still abundant — and the broad grin, the mastery of familiar repertoire and the championing of the unfamiliar: nobody alive has done more to educate our musical taste than Sir Simon Rattle. It is a shock, therefore, to learn that he will lay down his baton as chief conductor of the London Symphony Orchestra next year in order to take up a new post as music director of the Bavarian Radio Symphony Orchestra.

The maestro’s return to these shores in 2017, after 16 years at the helm of the Berlin Philharmonic, was greeted with jubilation. His presence here coincided with plans to build a “world class” concert hall in the heart of the City. A scheme was concocted to move the Museum of London to Smithfield, while transforming its brutalist building into a gleaming new auditorium with acoustics to match — a showcase for architecture as well as music. George Osborne, the then Chancellor, was enthusiastic, as was the City Corporation.

And so the news that he is to quit London for Munich is a double blow. Not only will we be losing possibly the greatest and certainly the most celebrated conductor this country has ever produced, but the prospect of a new musical magnet to attract the young has also receded. With no end to the Covid pandemic yet in sight, the high tide of globalisation may have begun to ebb, leaving London high and dry. Above all, there is Brexit. Financial capital is one thing; human capital is another. Renowned for his expressive hands, Sir Simon is now voting with his feet.

The optics of Rattle’s departure are about as bad as they could be. Yet there is no cause for music lovers to despair. Here are three reasons to hope that this setback to British culture will do no permanent damage.

First, Sir Simon’s decision to leave the LSO after only five years is almost certainly more motivated by personal than political considerations. He still lives in Berlin and Magdalena Kožená, the famous mezzo he married in 2008, is Czech. A workplace in Munich is obviously more practical for them both than London. International commuting puts a strain on any marriage — and this is his third. He turns 66 next week and may have tired of a peripatetic existence. Once the enfant terrible of the orchestral world, he has become its grand old man. It is time to settle down.

A second reason has to do with long-standing cultural traditions rather than present circumstances. Germany has always seen itself as the homeland of music and musicians; it was there, indeed, that the humble Kapellmeister first rose to become the modern maestro. Especially since the Nazi era, Germans have striven to make this universal language the very core of their identity. Never mind that quite a few great German composers, from Handel to Henze, have emigrated  because they found the atmosphere at home too stifling. It remains the case that no other country places a higher social, financial and intellectual value on classical music.

So it is hardly surprising that Sir Simon has been tempted back to a place where state subsidies to orchestras and opera houses are still a matter of municipal pride. In London he will have been expected to woo tycoons and oligarchs, not only to fund his grand project, but merely to pay his band’s bills. In Germany, he is treated like a demigod.

There is a third consideration, too. When Sir Simon took up his post at the LSO, the EU referendum had already taken place. He knew what the task ahead of him was and he took it on. Now that he is handing on the baton to someone else, it would be unbecoming of him to write off London as a place in which to make music. However angry he is about Brexit — and he undoubtedly is — Rattle knows that Britain is not and never was das Land ohne Musik (the land without music), as the German cliché has it. From Benjamin Britten to Thomas Adès and James MacMillan, postwar Britain has enjoyed a golden age of classical music — more so, in some ways, even than Germany. The fact that the Bavarians are poaching Rattle, as the Berliners did two decades ago, is a compliment. Britain has been and remains a global centre of gravity for all forms of music. The extraordinary Mirga Gražintyė-Tyla, the 34-year-old Lithuanian who now leads the Birmingham Symphony Orchestra where Rattle once made his name, is a case in point. There are no grounds to depict his departure as a desertion for the simple reason that there is plenty of new talent to take his place.

We must hope that Sir Simon will take his leave with a good grace and that he will frequently return to delight us with his infectious enthusiasm. This is a grim time for musicians and artists of all kinds, on both sides of the Channel. There will be a mammoth task of post-pandemic cultural reconstruction that could and should bring us closer together. Bitterness and Schadenfreude should have no place in that common cause.