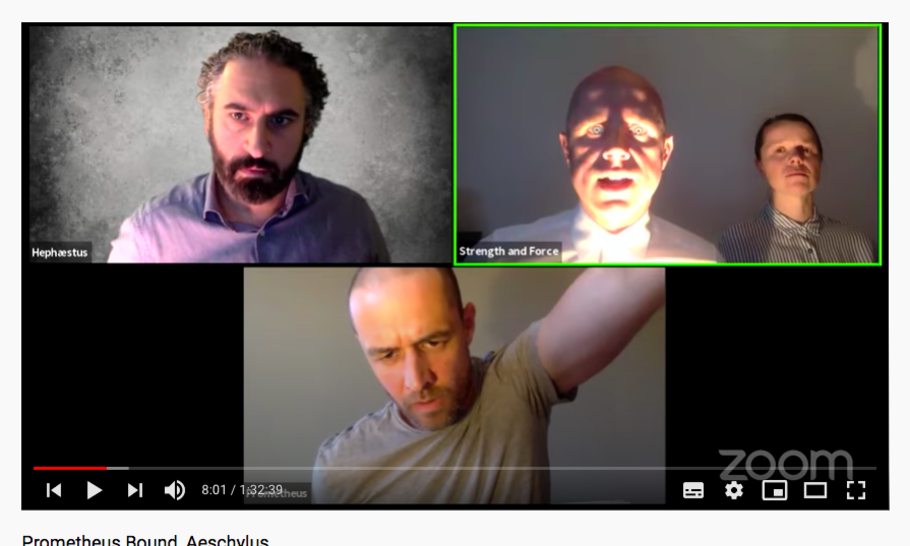 Last year, stymied by tour cancellations, actor, artistic director and Classics enthusiast Paul O’Mahony wanted to build a community among fellow performers from his Hove home as the world headed into isolation. Finding “very willing accomplices” at Harvard’s Center for Hellenic Studies and Brandeis University, he pulled together an international ensemble to read all 32 surviving Greek tragedies in weekly online sessions which kept growing in ambition. From the cast, Tim Delap (The Huntsman: Winter’s War) found “being able to check in once a week, see old friends, make new ones… was really special”, while Noree Victoria (Queen Sugar; American Crime Story) says that “it meant a lot to me to be chosen to be immortal over and over again”.

Down the road, the Actors of Dionysus performed a climate change-themed, free adaptation of Antigone in artistic director Tamsin Shasha’s Brighton garden: with a deus ex machina in the shape of Sussex Police, called by a Nimby neighbour. Meanwhile in Greece, theatre and film actor Argyris Xafis says that in rehearsals for a production of Aescyhlus’s The Persians marking 2,500 years since the battle of Salamis, “everything seemed too difficult” at the start, with mandatory mask-wearing and 3-metre social distancing. But regulations eased, the weather lifted and with Xafis having mastered his Erasmian pronunciation of Ancient Greek, the show earned rave reviews as it was globally live-streamed from the ancient theatre at Epidauros.

Traditionally performed outdoors, in masks, with limited movement and two or three actors playing all the named parts, the essence of Greek theatre – leaving aside the chorus – is a good fit for pandemic conditions. The plays are short and compressed like a contemporary one act drama (though box set enthusiasts might enjoy “binge watching” three tragedies and a satyr play, like ancient festival-goers). Playwright Beth Steel, who originally went to live and work in Greece aged 16, then much later, bowled over by Robert Icke’s Oresteia, read all the tragedies in one go, describes them as “trains set on narrow tracks, colliding at full speed”. Director Polly Findlay finds there’s “something intravenous” about the plays, offering “the most crystalised possible form of extremity and consequence”.

A zoonotic plague forms the background to Oedipus Rex. Researcher Dr Antonis Kousoulis thinks the description was drawn from a real plague in Athens and has even identified a likely pathogen. There are less literal connections with present times. In Philoctetes, the eponymous hero languishes from a snakebite wound that hasn’t healed for 10 years. People unable to see dying relatives may feel a parallel with the story of Orpheus. The Bacchae, in which King Pentheus’s rationality clashes with Dionysus’s animal passion, reminds us we are fundamentally social beings, says Xafis.

Beth Steel says she’s reflected most over the past year on Antigone, in which Oedipus’ daughter defies King Creon to honour her dead brother: “The state dictating how the dead are to be buried and a woman opposing that edict, at great personal risk, has felt very alive.” A Professor of Greek at Cambridge, Simon Goldhill, says the Greek tragedians were fascinated by the idea of closeness and separation (“there are very few gestures of touch, when they come they are very powerful”), and in Oedipus, “you can’t get a better case for social distancing”. Sophocles’s King Oedipus epitomises the hubris of impetuous, individualistic Athenian (read modern Western) man, says director Blanche McIntyre. His blinding is also a moment of awakening, just as the pandemic cast a spotlight on social inequalities and fuelled Black Lives Matter, argues Theatre Ad Infinitum’s George Mann.

Individual versus wider society conflicts, of the kind stirred up by politicians’ efforts to control Covid, preoccupies Greek tragedy. For instance, in the events preceding Sophocles’ Antigone, Eteocles is determined to fight his brother Polynices in defence of Thebes, despite being doomed to die if he does. Other themes that resonate include the treatment of refugees in The Trojan Women, Andromache and Helen, and race and identity in Euripides’ Ajax, through the characterisation of Ajax’s half-brother Teucer and concubine Tecmessa. There’s an unabashedly lustful approach to sex. “It’s like opera” says Professor Goldhill. “Because Deianeira loves her husband [Heracles, in Sophocles’ The Women of Trachis], she kills him.”

Canonical and solidly educational, Greek drama has also been a source of inspiration for writers from Racine to Jean Anouilh and from Eugene O’Neill to Wole Soyinka. The Polish experimental theatre group Gardzienice channels Dionysus to stage tragedies like Euripides’ Electra as ritualistic, dance-driven experiences. Beth Steel wrote The House of Shades as “a contemporary play that felt Greek but wasn’t in any way an adaptation” – Rupert Goold called it “a working-class Oresteia”. US Capitol insurrectionists and Trumpian politicians drew on the world of The Persians – if less Aeschylus than swords-and-sandals Hollywood epic – with banners and facemasks emblazoned with Spartan King Leonidas’ reputed expression of defiance “Molon Labe” (‘come and take it’). Princeton Associate Professor of Classics Dan-el Padilla Peralta calls for his discipline to disband if it can’t extricate itself from what he sees as its hierarchical and imperialist intellectual framework.

A more prosaic worry is the decline in those equipped to understand tragedy in the original, with Classical Greek A-Level students falling from 252 in 2015 to 188 last year. The charity Classics for All, however, points out that numbers taking the more democratic (and vernacular) Classical Civilisation A-Level are stable, at around 3000 a year. Among a wide range of initiatives, Classics for All has introduced Ancient Greek for 9-13 year olds into some 60 state schools through textbook Boris Batrakhos (Boris the Frog) — with encouragement from Boris the Prime Minister.

On the theatrical front, amid a generally bleak picture, there are bright spots. While industry figures have previously feared that some 70 per cent  of UK theatres may close down, outdoor spaces, eminently suitable for ancient tragedy, are bursting for the chance to get to work: from established venues such as the Minack Theatre, built into a Cornish cliff-face, to temporary arenas, from Dalston in East London to rural Suffolk.

In Greece, the world of classical drama has been rocked not only by Covid but by news that the former director of its National Theatre, who directed last year’s Persians, has been remanded on child rape charges. But the plan at Epidauros is to stage all the shows cancelled in 2020 plus fresh productions. Out of Chaos has started a second series of online performances and hopes to set up a touring company off the back of the project.

Argyris Xafis says that “after getting in touch with ancient drama, you tend to fall in love with it”. He and his fellow performers are waiting in the wings to cast the same spell on the rest of us.