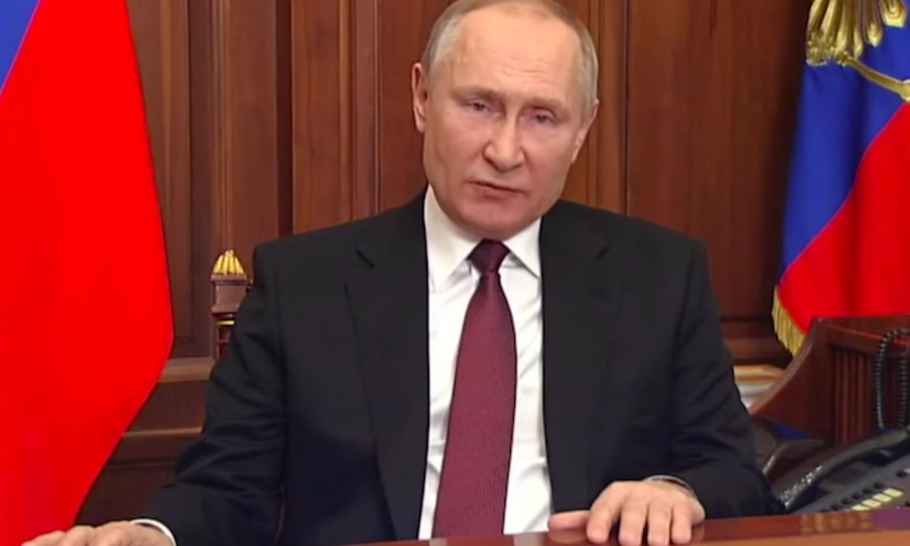 This is indeed one of the darkest days in European history. Waking up in the small hours this morning to see the dispatches and images from Ukraine and Moscow, watching a cruel and entirely preventable human catastrophe unfolding, my thoughts went back to the years between 1989 and 1991 — heady days when I found myself not only helping to write the first draft of history, but participating in it.

The fall of the Berlin Wall was, quite simply, the greatest, most hopeful event of modern times, filled with the promise of a better future for the whole of humanity. On that night of November 9, 1989, when I asked the final question at the famous press conference — “Herr Schabowski, what will happen now with the Berlin Wall?” — it was answered by the people: the Wall, the Iron Curtain, the Cold War had no purpose at all.

Those of us who reported on the peaceful revolutions that liberated Central and Eastern Europe believed we were witnessing a turning point in the history of this bloodstained Continent. Solidarity in Poland, the Velvet Revolution in Prague, the overthrow of Ceaučescu, German reunification, Yeltsin’s election as Russian President, the defeat of the August coup and the dissolution of the Soviet Union: these were triumphant affirmations of the human spirit, a new foundation for a free world.

East and West would no longer confront one another as we had done throughout the Cold War, armed to the teeth in a gruesome embrace with death. The emblematic acronym of that frozen conflict had been MAD, Mutually Assured Destruction. We are now reminded that the threat of global annihilation was never really lifted, but it was obscured by the seemingly inevitable advance of democracy.

Now we know better. Vladimir Putin has tried to take back everything that was gained in those years of liberation. He has crushed freedom in Russia and he is now building a new despotism on the embers of the old. Three decades later, his answer to my question is: “I shall build a new Berlin Wall, impose a new Iron Curtain, unleash a new Cold War. But first: I shall destroy Ukraine and restore it to what I call the “spiritual space” of Russia. The world shall be made to forget that an independent Ukraine ever existed.”

The West’s role in this tragedy has been that of the Greek chorus: eloquent in its lamentations, bewailing what has happened and warning of what is yet to come, but powerless to intervene. It is a necessarily cautious and self-protective part, but nevertheless an ignominious one. The G7 nations meeting today, the entire family of NATO members, the wider realm of the free world, now have an opportunity to redeem our Western civilisation.

One man has conducted himself with an entirely admirable modesty, dignity and humanity throughout: the Ukrainian President Volodomyr Zelensky. Though he is a former actor, he has never been less than entirely authentic in his public persona. In his speeches, he has appealed to our better selves. He has reminded fellow leaders of the moral imperative to stand up to aggression, notably at the Munich Security Conference last weekend, when he recalled another Munich Conference in 1938.

Zelensky was at his best early this morning, appealing to the Russian people over the heads of Putin and his generals, speaking in Russian and reminding them that his family had fought in the same Great Patriotic War against Nazi Germany. He did not mention that other members of his (Jewish) family had been exterminated by the Nazis. This was his reply to Putin’s claim to be engaged in the “denazification” of Ukraine. The very notion that a nation of Nazis would elect a Jewish leader is absurd. And so Putin, the world’s most accomplished rigger of elections, must pretend that his counterpart in Kyiv is somehow illegitimate, a criminal guilty of “genocide” who must be put on trial. With every one of his accusations, Putin merely incriminates himself.

In reality, Zelensky is a true patriot. His address ended: “Glory to Ukraine!” But the reply to the restraint that his government has shown is today’s onslaught. This invasion is a monstrous injustice and a breach of treaties and international law, but it is much more than that: it is a crime against humanity. Proceedings against Putin, Shoigu and their colleagues should be instituted at The Hague without delay. As for Zelensky: he deserves a Nobel Peace Prize. Let us hope that it will not be posthumous.

As I write, the situation is fluid and any reflection must be provisional. One more thought, however. What we are witnessing in Ukraine is not merely the madness of Tsar Vladimir. We have often mocked Putin as a comic figure, just as our forebears could only process the horrors unleashed by Hitler by imitating him, lampooning him, singing bawdy songs about him. Now, however, we can see clearly what was previously obscured. Putin is the face of radical evil in our time, as Hitler and Stalin were in theirs.

Ukraine lost four million of its people in the genocidal famine now known as the Holodomor; it lost even more people in the Second World War, including most of its Jewish population in the Holocaust. Now this nation is on the rack again, at the hands of a criminal regime that has little support at home. It is a mystery how Putin imagines he will ever make Russians out of the Ukrainians after this ordeal. All he will achieve by this carnage is to make certain that Ukraine will never surrender.

Putin himself will not emerge intact: he and his regime too are mortal. He may think he has turned the clock back to the era before 1989, but in reality he has run out of time. It has never been so clear for all to see that Putin’s days are numbered. All power tends to corrupt; absolute power corrupts absolutely; and radical evil sooner or later consumes itself.