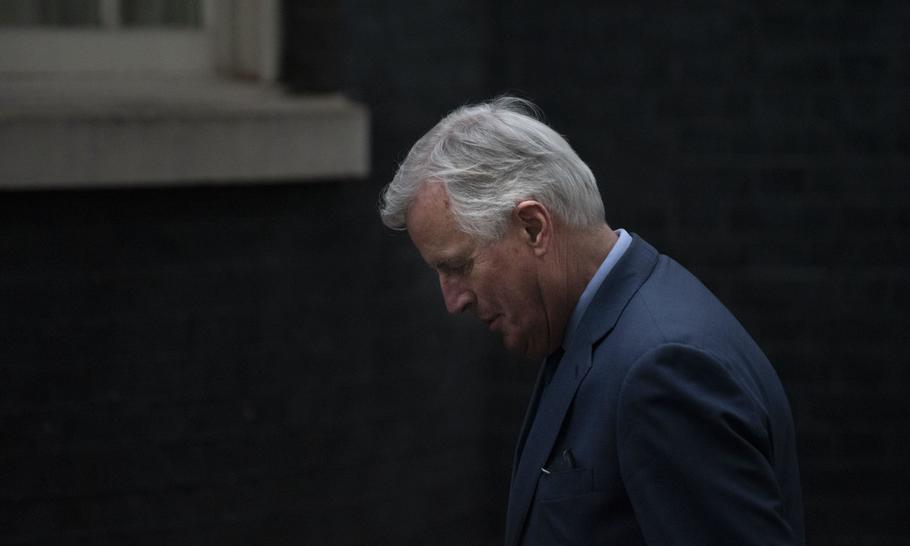 Michel Barnier stares out from the cover of his new book, My Secret Brexit Diary: A Glorious Illusion.  Distinguished, suave, reassuring, every inch the international civil servant. Not exactly the Professor Moriarty of the right-wing British press, nor the crumpled joker, Boris Johnson, who rode to power on the back of Brexit.

The book’s sub-title is inadvertently accurate: it contains no spicy insider secrets or major revelations. This is the EU chief negotiator’s carefully calibrated historical record of 1,600 days of Brexit negotiations. But not all entries, doubtless carefully edited with a diplomat’s eye on the future, are put through the blander.

This is a chronicle of a hard Brexit foretold. Theresa May’s January 2017 Lancaster House speech ruled out future membership of the Common Market and the Customs Union. This eliminated from the negotiations almost all EU models previously negotiated with countries such as Norway, Iceland or Switzerland. It left Britain, like South Korea and Canada, with a free trade agreement option. “Can we be sure,” an astonished Barnier asks, “that the referendum vote gave the British government carte blanche for such a total break?”

Britain’s “red lines”, announced before negotiations had begun, defined the UK’s negotiating positions and precluded the most mutually advantageous partnership models. British negotiators were stuck with seeking special privileges for a third party country, playing for time in the process, engaging in what the EU saw as “cherry picking”. May’s appointment of David Davis as Secretary of State for Exiting the European Union opposite Barnier, while she herself worked through an experienced, knowledgeable and competent civil servant, “Olly” (now Sir Oliver) Robbins, didn’t help.

On the British side there was misinterpretation, even denial, of the nature of Barnier’s — and the EU’s — own red lines. The misunderstanding went deeper. As the Brexit Diary repeatedly reveals, the way of thinking on both sides was different. Barnier, for instance, insisted on logically sequencing British withdrawal with “divorce arrangements” first, including UK financial obligations, rights of EU citizens in Britain and British citizens in the EU, peace and stability in Ireland.

Barnier worked from basic principles. The Single Market, as the foundation of the EU, an “eco-system” involving much more than economics, was inviolable, so between the Single Market and third party economies such as post-Brexit Britain there had to be a “level playing-field”. Unity amongst the 26 other member states, sustaining unanimous support for the EU’s negotiating position, was essential, “everyone for all”, in short.

The positions of all individual EU negotiating teams on specific topics were derived from these principles — “everyone for all” applied particularly to Gibraltar (Spain), Cyprus (UK military bases) and, of course, Ireland (the Good Friday agreement). Throughout negotiations the EU position remained coherent. Barnier prioritised transparency towards all interested bodies, from the EU Council to Danish fishermen. In contrast, British tactics appeared more like the interplay between a weak trades union and a powerful employer: bluff and piecemeal pursuit of concessions.

The UK had one overarching principle: “sovereignty”, sometimes just a matter of being seen to “Take Back Control”. Barnier had the advantage of representing the EU, an international organisation based on the closest possible mutually beneficial co-operation between national sovereignties in a globalised world. He found the British concept of sovereignty, frequently deployed as a trump card at critical moments, irrational.

The EU Commission task-force had other advantages over the British. Barnier was a team player, leading a talented international team which he respected, drawn over the four years of negotiations from 22 different nationalities. He worked tirelessly to keep the different leaderships in Brussels, the Commission President and the different Commissioners, the Council of Ministers and European Parliament, plus member states’ political leaders, business leaders, academics and trades unions, fully up to date. He was rewarded with broad solidarity and a lack of dissent from his approach and strategy.

In contrast, the Prime Minister, Theresa May, was negotiating on three fronts: with Barnier’s team, with Brexit hardliners on her back benches and with Northern Ireland’s DUP, who during her second term, 2017-2019, brazenly took advantage of her slim majority to her detriment. Meanwhile Boris Johnson, a fifth column, was using his role as Foreign Secretary, after resigning as a Daily Telegraph journalist, to position himself for a Conservative Party leadership bid, championing the hardline Brexiteers, prepared if necessary for “No Deal”.

Barnier kept himself well-informed about the political shenanigans in Whitehall. When Johnson won the decisive second round of the Conservative Party leadership election on 23 July 2019,  Barnier was reflecting on his “deliver Brexit promise” (“get Brexit done”). Two days later Johnson declared his determination to leave the EU by 31 October and make further discussions dependent on rethinking the Withdrawal Agreement, notably by removing the backstop designed to prevent any “physical border” within the island of Ireland.

To thwart EU strategy, Britain repeatedly made attempts to bypass Barnier’s negotiating team by directly contacting EU heads of state and Jean-Claude Junker, President of the Commission, in the hope of gaining support and weakening the Commission’s position. The old imperial “divide and rule” tactic was never going to work. At one point, two key heads of state were refusing to take Boris Johnson’s calls. The UK underestimated the degree to which Britain’s withdrawal and behaviour was counterproductive, uniting a fractious EU divided over immigration policy and threatened by populism in Hungary, Poland and elsewhere.

Reading between Barnier’s carefully crafted lines, at the political level, from David Davis to Boris Johnson, there was a deplorable lack of preparedness for meetings and grasp of key detail. Following Theresa May, for whom there was some sympathy in Brussels — she knew her brief — there was a growing loss of trust. But Barnier kept a “stiff upper lip”. He writes of his commitment to avoiding anger, aggression and vengeance. The tone of the diary entries suggests that he succeeded. But the consistent denigration of malign “Brussels intransigence” in Britain, coupled with a readiness to tear up international treaties and attempts to re-negotiate hard-won agreements, clearly tried even the most experienced of negotiators on the EU side.

Because the Withdrawal Agreement had come into force, Johnson’s threat of an Internal Market Bill in September 2020, enabling the reversal of the Protocol on Ireland and Northern Ireland and a clear-cut threat to breach international law, shocked Brussels. This, Barnier writes, “from a country that, for centuries, has built its reputation on the trustworthiness of its signature”. Despite such signs of bad faith, negotiations moved forward, shoals of fish in British waters to the left, French fishing boats to the right. An “ambitious and fair free trade agreement” was reached on Christmas Eve 2020. Forty-seven years of EU membership had ended. Here the book ends, though Brexit problems do not.

The British Government seems to have learned nothing from the negotiations. Barnier has. His valedictory last chapter nods rightwards towards the former Gaullist party, “Les Républicains”, which may or may not select him as their candidate in the coming French Presidential elections. Whether Boris Johnson fights the next general election as the Prime Minister who got Brexit done will depend on — excuse the anachronism — the men in grey suits. They may be having them dry-cleaned in preparation, or perhaps pre-crumpled as I write.

Barnier Brexit Johnson May The EU