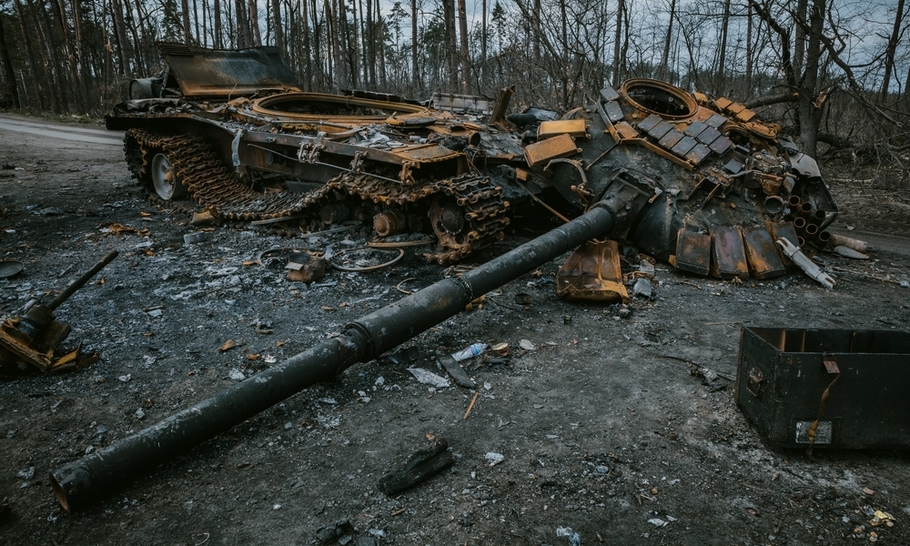 The leading characteristic of Russia’s invasion of Ukraine has to be how bizarre it all is. Russia is, after all, a mature military power, and still, presumably, educates officers in a staff college where war is studied. Certainly Russia’s current military quagmire will, or may already, be a case study in How Not To Make War.

Ukraine may not have hitherto been a militarily significant country, but she has a large landmass and population. When the Anglo-American coalition set about liberating Kuwait in 1991, the first operation was to secure and maintain air superiority to the point of air supremacy and then exploit this to range across Iraq and Kuwait attacking every significant military asset, while also destroying Iraqi infrastructure, such as the electricity grid. The air campaign, Desert Storm, lasted about six weeks. The land campaign lasted precisely 100 hours.

The campaign to liberate Kuwait had a historic precedent. In 1944, Anglo-American air forces spend months degrading infrastructure and military assets in Northern France to the point where there were only two sorties against Allied forces on D-Day, and the Wehrmacht on the Normandy coast were isolated from reinforcement by rail. For German forces, travelling by road during daylight was a death sentence. Another precedent is the Battle of Britain, which was essentially an aerial bombardment conducted by the Luftwaffe ahead of a seaborne invasion. It was mismanaged, but was still a major military effort.

By contrast, Russia’s aerial attacks appear to have been relatively minimal, given the size of her opponent as well as the reported size of Russia’s air forces, and have failed to degrade or isolate Ukrainian forces. Russia still does not have air superiority. Invading Ukraine without this advantage means her forces on the ground are taking heavy punishment.

In both Kuwait and Normandy, Anglo-American forces relied on deception to misdirect and confuse their opponents. In 1944 General Patton headed up the First US Army Group, an entirely fictitious formation based in Dover designed to make the Germans believe that the main landing would take place in the area of Calais and that D-Day was a diversionary attack. Similarly, the US Navy manoeuvred off the Kuwaiti coast, forcing Saddam Hussein to detach forces to prevent an amphibious assault that never happened.

By contrast Russia made zero use of deception to misdirect Ukraine or NATO. From Russia’s 2014 occupation of Ukrainian territory, Ukraine had seven years’ notice of Russian intentions, which they used to good effect to professionalise and modernise their armed forces with support from the English-speaking world in the form of training and equipment. The UK mounted a non-stop aerial convoy just before hostilities commenced to arm Ukrainian forces with the latest anti-tank technology, the effect of which has been to suggest that Russia’s mass tank formations are actually a military liability.

The hinge on which Russia’s strategy relied seems to have been an airborne assault on Kyiv that was initially repulsed. A convoy of helicopters was attacked en route to Hostomel Airport. The initial Russian failure to take the airport meant that a follow-up fleet of air transports carrying better-armed and armoured reinforcements could not land and had to turn back. The airport changed hands several times, and was rendered useless for large-scale landings.

It seems that Russia’s primary strategy was to insert a large airborne force to capture swiftly the Ukrainian government in the hope that this decapitation exercise would end all resistance. Putin’s gamble failed in the same way that Montgomery’s gamble did at Arnhem. Airborne troops are by necessity light infantry and cannot survive against heavier opponents. However, failure at Arnhem merely delayed the inevitable. Failure at Hostomel and on the Kyiv front has been catastrophic for Russia.

Far too much reliance seems to have been placed upon Russia’s sole major airborne operation. By contrast, there were numerous airborne operations during D-Day, with varying levels of success. But had any or all of the airborne operations failed to achieve their goals, this would not necessarily led to the failure of the campaign in the way that Russia’s defeat at Hostomel has. Similarly, had German glider troops failed to neutralise the Eben-Emael fortress complex during the Nazi invasion of the Low Countries and France in 1940, this would not have resulted in the blunting of Hitler’s blitzkrieg in the way that Putin’s assault has been repulsed.

Russia’s prestige as a major global power comes almost exclusively from the might of her conventional forces, backed by a nuclear arsenal. These conventional forces have been exposed as comparatively worthless. Unlike the British Army after the reverses on mainland Europe in 1940 and in the Western Desert in 1941, there seems no roadmap to revitalise Russia’s fighting force in either the short or medium term, especially now that Russia is now even more of an international pariah state than she ever was during the postwar Soviet era.

And this is why Russia’s invasion of Ukraine seems bizarre. There are numerous historic precedents for mounting a successful assault using state-of-the-art military equipment. Russia has ignored all of them except one, which is the campaign to clear the USSR of invading Axis forces from 1943 onwards after holding them at bay at Stalingrad.

However, this did involve shovelling millions of troops westward in attritional fighting. The Soviet Union hoped to be the last power standing on the Eastern Front against a blockaded opponent fighting a war on two fronts, while also having to deal with massive debilitating air raids. While many talk of the Soviet “sacrifice” in defeating Nazi Germany, its strategy actually involved wasting lives from a supposedly bottomless pool of manpower to secure victory. No other country made such extensive use of penal battalions as a forlorn hope to soften enemy fortifications, while maintaining battlefield security formations to machine-gun any retreating troops. Russia vied with Germany in using execution and imprisonment as a way to maintain military and national discipline. Putin has put in place similar draconian laws to stifle debate and prevent dissent, but he also seems to have got out the shovel.

In one respect Putin resembles the Kaiser. In 1914 the Supreme Warlord bet his empire on the success of the Schlieffen Plan to take Paris in six weeks, and had no alternative strategy when this failed other than the default of attritional warfare. The Imperial German Army was designed for swift military action, not static warfare based on near-constant engagement, and the same is true of Putin’s forces.

Russia does not look like she is winning a war of attrition, as her so-called professional army is being held off by highly-motivated paramilitary forces. The sanctions imposed on the Russian economy mirror the blockade against Imperial Germany that eventually led to mutiny and revolution. Like the Kaiser, Putin may not be able to rely on the current adulation of his people if the war drags on for months or years. A frustrated populace will sooner or later start to blame the leadership rather than their enemies.

Czar Nicholas II fell from power in 1917 as his autocratic management of Imperial Russia’s armed forces led to humiliation and defeat in the Great War. In 1964, Nikita Khrushchev was toppled by his Politburo colleagues, due in part to his initiative to place nuclear missiles on Cuba that almost led to World War III before having to withdraw them following US pressure. Leaders fall following military reversals, and Russia is not immune.

It may well be that Russia’s military adventures thus far were just a preliminary to a massive summer land campaign, now that the ground has dried enough for armoured vehicles to move off-road. But if all Putin had in his hand was actually a Russified Schlieffen Plan, then Russia is now fighting a war for which she was not prepared. If Russia has ignored the precedents for attack, then she may not be able to avoid the precedents of the consequences of defeat. Just ask the Hohenzollerns or the surviving Romanovs what may come next.