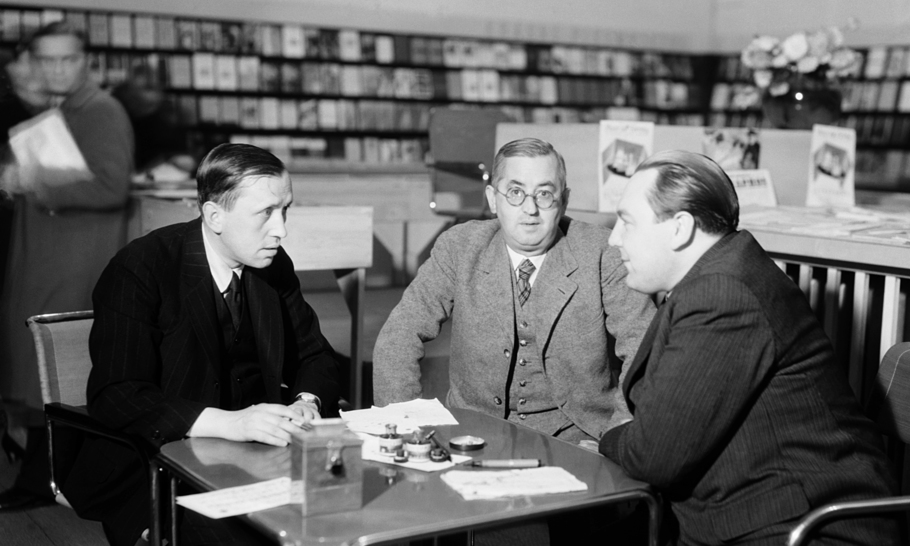 Being in the middle of this coronavirus crisis, one may be forgiven for pondering the future of the human race and its possible extinction. The pessimistic predictions are usually based on war and pestilence. We have got used to the idea that nuclear war would finish us off, but, since the end of the Cold War, that possibility seems more remote. Pestilence in the present form worries us, of course, but, somehow, we feel that our scientists, with the aid of our wise politicians, will save us from the worst.

The possible extinction of mankind has been the subject matter for many science fiction writers. One of the earliest and most original among them was Karel Capek (pictured, above left), who came from the same stable, and was born at just about the same time, as Hasek and Kafka. He wrote the first of his science fiction masterpieces a hundred years ago. It was a play called RUR, which stands for Rossum’s Universal Robots. The Rossum’s were a father and son team like the Braggs and the Polanyis. Rossum Snr went to his Galapagos island to study marine biology. While he was messing about with various materials, organic and inorganic, he stumbled upon a substance that was the basic building block of life. Alas, he was an atheist and far too ambitious. He wanted to create man, as perfect as that created by God, just to show that there was nothing great in the creation of Adam and Eve. He spent a decade on the project without any success.

Then Rossum Jnr, an engineer by profession, took over. He no longer aimed for perfection. His idea was to organise mass production a la Ford motors, and sell the products on the open market. He called the creatures, quite indistinguishable from humans, robots (robot was the term used in feudal times in Bohemia and Hungary to describe the 90 days of labour serfs had to do each year for their landlords.) His robots could work days in, days out. All factory owners bought them. Soon, robots working in factories became a worldwide phenomenon. Labour became cheap, efficiency was high, which led to prosperity. Robots were also employed by the military to fight wars.

The equilibrium was perturbed by the appearance of a human rights organisation called the Humanity League. It had 200,000 members. It was influential. Its noble aim was the emancipation of the robots. The more intelligent robots soon realised that they had been exploited. They called for the Robots of the World to Unite, organised a revolution and killed all the humans.

Not to be entirely pessimistic, Capek hinted at the end of the play that a new world populated by robots will emerge. The robots will eventually turn into humans who can live, love and reproduce in the traditional way.

Capek’s second dystopia appeared in 1936, titled War with the Newts. It is a novel. It starts with a boat commanded by van Toch, a drunken captain of Bohemian origin. He discovers by accident an up-to-then unknown species of animals living in the Indian Ocean close to a small Sumatrian island. Their usual habitat is the sea where they live during the day but venture out to the shore at night. They have no hair, are a bit taller than penguins and walk like penguins on their hind legs. They have no ways to defend themselves and sharks easily prey on them. Their origin is obscure. The only explanation offered is that they might be antediluvian, and might even be the species from which homo sapiens evolved after the Flood.

The captain takes an interest in the species he discovered. He is able to strike up a conversation with them and has the bright idea of persuading them to bring up shells from the sea, which provide him with a collection of fine pearls. In return, he supplies knives to the newts which they use skilfully to kill the intruding sharks. Seeing the intelligence and easy adaptability of the newts to various tasks, the captain sees commercial possibilities in making the newts work for humans. He contacts a financier, Mr GH Bond, another Bohemian, who sets up the Salamander Syndicate with the specific aim to tame the newts and employ them in factories to work for the company.

The taming of the newts turns out to be a very fruitful and profitable exercise. Having no predators, they could multiply (the females produce large number of eggs and bring them to life in no time at all), and soon there were hundreds of millions of them spread over the world.

The next job undertaken by humans was the education of the newts. They learned fast, they learned languages, many of them enrolled in universities founded specifically for newts. Some of them even entered the legal profession.

With so many newts around, conflicts were bound to arise. Interestingly, the conflict did not start with the newt intellectuals but with those newts who lived in their ancient habitat. Those newts, being valuable cargo, were hunted down by pirates. They were captured and sold on the open markets. The surprising thing was, certainly to the pirates, that even these primitive newts acquired firearms, provided presumably by fellow newts. Several of the pirate ships were destroyed by the newts. Human society turned a blind eye to these incidents but woke up when a French cruiser in the Channel was sunk by the sea-creatures. But by then it was too late.

The pessimists among the humans decried: “After us the Salamanders”. The optimists still believed that the newts could be contained and defeated. But they were wrong. The newts had an unusual tactic. They called for “living space” that they achieved by extending seas at the expense of continents. They had the necessary explosives to do that. One of their major successes was to extend the Black Sea right up to the Arctic circle. In Western Europe their primary target was Great Britain, an island that could be inundated by seawater. Their submarines (they felt comfortable in the depth of the sea) blockaded the British Isles. They had the upper hand but against all the odds, Her Majesty’s Government refused to surrender.

Altogether, the newts turned two-thirds of the continents into sea in a way that provided them with plenty of coasts. Humans were forced to live in high mountains. Even in the heart of Europe the sea of newts reached Dresden. As the story ends, in Prague, newts are sighted in the Vltava. One of the human characters, Mr Povondra, exclaims: “This is the end.”

Capek’s War with the Newts was published in 1936 after the remilitarisation of the Rhineland. He died in 1938, three months before the Germans occupied Czechoslovakia. When writing about the newts he was obviously thinking of the rise of Nazism: the leader of the newts is Andreas Schultze (a man, not a newt) who was Sergeant Major in the First World War. There are some other allusions as well, such as when the newts declare their peaceful intentions at the same time when demanding more Lebensraum.

However, the second dystopia is not as strident, not as concentrated as the first. By 1936, Capek had many other targets to satirise. The possible extinction of the human race is only one of them. Inter-war diplomacy comes up for much criticism, nay ridicule. Capek’s other targets are the Hollywood film industry, the greed of commercial companies, and appeasement. The European powers offer free hand to the newts in China, provided they will leave Europe in peace.

The end is not only nigh, the end is already there. To be certain, “This is the end,” says Povondra, “the end of the world.”

Oddly enough there is another chapter after the novel ends: The Author Talks with Himself. Apparently, as in RUR, Capek draws back from the conclusions he so carefully constructed. He hints at the possibility that the more sophisticated Western Newts, the Atlantians, will fight the Eastern Newts, the Lemurians. To quote from the book:

“In the name of true Newtship, the slogan is: Either them or us! The Lemurians, armed with Malaysian krisis and Yogi daggers mercilessly slit the throats of the Atlantian intruders; In return, the more advanced Western Atlantians let off into the Lemurian seas chemical poisons and cultures of deadly bacteria with such success that all the world’s oceans will be infected. The Newts will die out.”

And humans will return from the mountains and will repopulate the coasts.