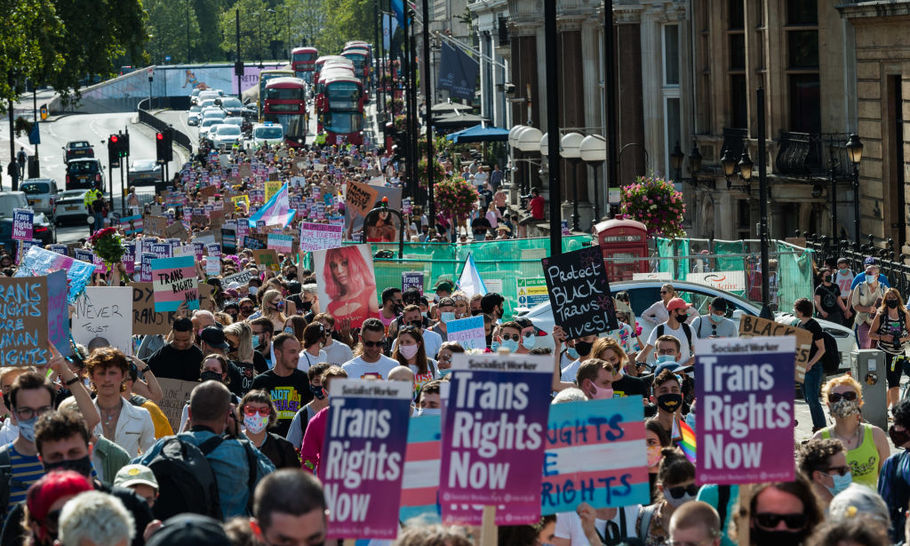 We can probably all agree shouting “where are the trannies?” is neither polite nor politically correct, but ought it to be a police matter? This was the question provoked by the emergence this weekend of a ten-minute video where a drunk but affable and articulate man is given a public grilling by officers from the Metropolitan police force. The man had been drinking outside a pub in Whitehall when a protest marched past. The protesters from London Trans+ Pride were demanding reforms to the Gender Recognition Act, which is the subject of a long-awaited announcement from Women and Equalities Minister Liz Truss. The heavily-debated proposals, which include the right for an individual to “self-identify” their legal gender, have become a flashpoint in the ongoing culture wars.

After receiving complaints from the protesters, seven police officers appeared to speak to Richard, the man accused of using the “t” word. With the earnest bluster of a few beers, Richard explains that he was prompted to ask “where are the trannies?” because the march didn’t seem to have any transsexuals in it. He added “They’re arguing for a certain cause, and I’m arguing for a certain cause.” In response, one officer, presumably fresh out of her equalities training, told Richard that he had been “shouting out homophobic things.” His response, that he’s gay and his comments were not homophobic, left the police officer looking somewhat deflated.

The fact that at a time of stretched resources and constant complaints about under-funding, seven police officers arrived to question a man for asking a legitimate, if crudely phrased, question is revealing. Alongside 31 other police forces in the UK, the Metropolitan Police are “Stonewall Diversity Champions”. Stonewall is the UK’s largest LGBT advocacy group and in addition to lobbying it provides training and guidance to organisations across the country.

Over recent years, Stonewall has come under fire for what many see as its decision to advocate for trans people at the expense of those who are same sex attracted. In a staggering move that has angered many, Stonewall has redefined what it is to be a homosexual. With an authority not so much earned as stolen, today Stonewall describes homosexuals not as those who are same-sex attracted but rather as people who have a “romantic and/or sexual orientation towards someone of the same gender.” This is to avoid offending “transbians” — that is to say the increasing number of men who identify not only as transgender women, but as lesbians.

Bizarrely, Stonewall believes that lesbians can and sometimes do have penises and that to contradict this is hateful. This would be an amusing tale of “political correctness gone mad” were it not for the fact that through its Diversity Champion scheme Stonewall has the support of some 750 organisations, including The Cabinet Office, Ministry of Justice and even MI6. And Stonewall is not passive in its beliefs. It is a well-funded lobby group with a history of making legal change. Its most recent action has been focussed on pushing for self-identification of legal gender as part of the proposed amendment to the Gender Recognition Act.

Unlike Stonewall, Fair Cop is a small and relatively new organisation dedicated to ensuring police officers exercise their duties “without fear or favour”. The group was founded by former police officer Harry Miller. Last year Harry was visited at his place of work by a Community Liaison Officer from Humberside Police who explained he was there to “check” Harry’s “thinking”. The prompt for this action, which was officially recorded as a “non-crime”, were comments made on Twitter as part of discussions surrounding the Gender Recognition Act. While Harry’s tweets might have offended a supporter of Stonewall they were perfectly legal. It should be noted, Humberside Police are also members of the Stonewall Diversity Champion scheme. Harry Miller successfully argued in court that this breached his right to freedom of expression, as enshrined under Article 10 of the Human Rights Act. He is now taking on the College of Policing.

Reflecting on the footage that showed the questioning of an ordinary citizen for use of the word “tranny”, Harry told me: “From a Fair Cop point of view, our locus of control is the law. I think ‘tranny’ is offensive and sits alongside all the other insults which have no business being policed in and of themselves… The police attended because they have swallowed the narrative whole. They would not attend a similar shout of ‘Where are all the Terfs / Christians / Americans / People in wheelchairs / women’.”

Stonewall’s definition of “trans” includes those who consider themselves “gender-queer”, “gender-fluid”, “non-binary”, “crossdressers”, “agender”, “nongender”, “third gender” and “neutrois”. But there is a live and ongoing debate on what it means to be trans, and in a free society it is perfectly legitimate not to share Stonewall’s view that men who choose to cross dress are a persecuted minority in need of protection. Furthermore, it could be argued that ridicule is a fair response to someone who considers themselves “neutrois”.

Just as the law rests upon solid definitions, Stonewall’s continued funding depends upon expanding them. The charity’s income has risen by 61 per cent from 2014 to 2018 — Stonewall formally added the ‘T’ to the “LGB” in 2015. It was recently announced by Stonewall CEO Nancy Kelley that Stonewall would soon include an ‘I’ for those with intersex conditions, though whether this has been requested by those with intersex conditions remains a moot point. It is deeply troubling that from police forces to the Crown Prosecution Service, civil servants and public sector workers are being taught that Stonewall is the arbiter on all matters of LGBT equality and there is increasing evidence that this is leading to the policing of opinion.

Through the “Diversity Champions” scheme, Stonewall effectively defined the boundaries of acceptable opinion across statutory bodies, and those who transgress risk not only an interview with human resources but potentially with the police. It should be remembered that in the UK there is no right not to be offended, and in enforcing one approach to transgender issues the right to freedom of expression itself is undermined. This is particularly concerning during a time when issues such as self-identification of gender are the subject of live political debate.

The restrictive influence of Stonewall does not just capture institutions, it captures minds. This was clear from the incoherent response of the police to Richard’s explanation of why he had shouted at those protesters. Unable to articulate why what he did was wrong he was finally left to continue his beer. It seems fitting to end this where it started, with the words of a gay man called “homophobic” by a member of the Metropolitan police force. He said; “you’re protesting for people who aren’t even supporting you. I’ve not said anything horrific, I’ve asked a question.” Should I ever see Richard in the pub I’ll look forward to buying him a pint and having a chat about politics. I do hope no-one will be offended.