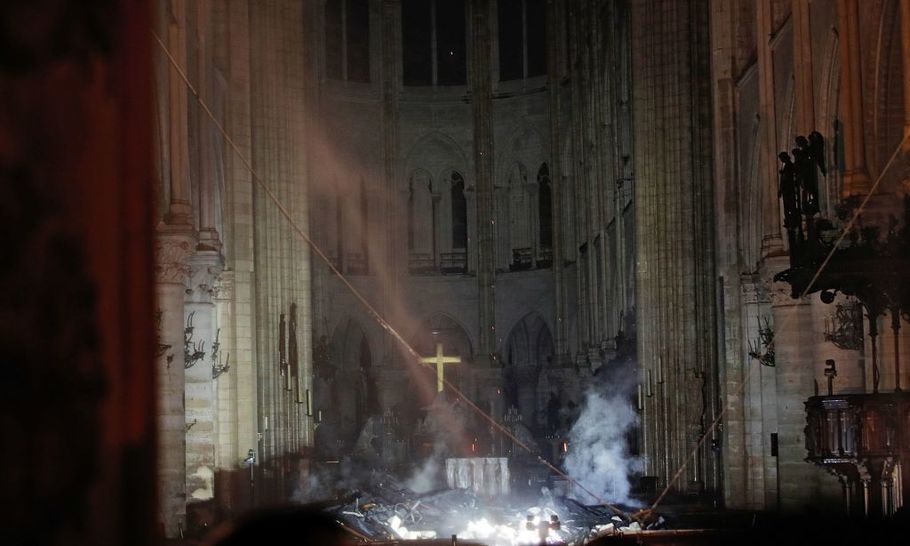 It is a hazard of having worked as a journalist in BBC News for 30 years – in my case in the newsroom of the BBC World Service – that one can never watch or listen to a news bulletin without thinking of how the headline should have been written and how much better the story could have been told.

But it really was a remarkable feat for BBC 1’s News at Ten last night to get through the entire programme, without a single mention of any of these words: Christian; Christianity; Catholic; worship; worshippers; sacred; Mass; Holy Week. It was as if it hadn’t occurred to any of them that the awful fire which had been engulfing Notre Dame Cathedral for several hours by the time they came on air, was anything deeper or more meaningful – to billions, at least, of Christians worldwide (particularly Catholics) – than the tragic destruction of a particularly well visited tourist attraction.

Lucy Williamson, in Paris, did make one reference to Parisians praying for the Cathedral. There was also much interest in Kevin Connolly’s report later about Notre Dame’s historic significance – references to its having witnessed the coronation of Napoleon and the celebration of the liberation of Paris in 1944 – and so on. But where was the talk of its sacred spaces, made holy by the prayers of Catholic worshippers over hundreds of years? Where the footage of the great Masses celebrated there? Where the clips of the choir raising their voices in hymns of praise?  Or the shots of the crowds gathered outside as the fire blazed, singing hymns and praying that the Cathedral might be saved?

Why, in short, did the BBC’s flagship news programme, when it had time to prepare its coverage properly, fail to acknowledge Notre Dame’s importance as France’s most profound expression of the Christian civilisation on which an entire continent was founded?

The rot at the BBC, in respect of the way in which it reports stories which have to do with the Christian faith, set in, I think, many years ago. It matters because it has now reached the stage where even the slaughter and persecution of Christians worldwide, from Nigeria to China, goes woefully under-reported. Domestic outlets are much worse offenders than the World Service, but even the latter cannot be wholly exonerated.

How has this come to be? Much of it stems from ignorance. As a Catholic, I was amazed, at Bush House, at how newsroom colleagues, brought up and educated in the UK, with a knowledge of the global geopolitical scene which far surpassed my own, could be so ignorant about Christianity. I remember one Good Friday on the newsdesk discovering that only one of half a dozen bright, well educated BBC journalists I was working with that day, knew what event it commemorated. Even now, as I write, the seasoned BBC journalist, Hugh Schofield, is telling the World at One that the Notre Dame calamity happened in Easter week. No, Hugh. We are not in EASTER week. We are in HOLY Week. We must go through the Last Supper, the betrayal of Christ and His crucifixion before we, at last, next week, come to the joy of the resurrection and the celebration of Easter.

But there’s more to it than ignorance. They do not wish to know. A world view which accepts without question the ‘enlightened’ liberal view on matters such as abortion and euthanasia long since, took hold at the BBC, to the extent where, even at the World Service – that last bastion of neutrality – the normal, scrupulous checks on whether we were ‘editorialising’ the story were cast aside when these matters were our subject. Abortion is a right. Fact. Forget those in parts of the world in which we broadcast where it is not regarded as such.

The unfolding of the vile scandal of sex abuse in the Catholic Church has merely served to confirm the BBC’s already well established prejudice against Catholicism. Sex abuse has become the only Catholic issue considered worth reporting.

When Pope Benedict visited  London in 2010, an edict was issued from the morning editorial conference at Bush House, that the Pope’s remarks on child abuse, made on his journey here, were to remain at the top of the story “for a reasonable number of hours”, apparently regardless of anything that might subsequently happen, or that he might say on other topics on arrival. It was an astonishing departure from our normal editorial practice of judging a story as it developed and on its merits. Shortly after the edict was issued, I was asked if I would mind moving from my position as lead writer for the day to the Africa desk, about which I knew nothing. I was replaced by someone who knew nothing of the Pope. Such a thing had never happened to me before and never happened again. I was told later, at second-hand, that it was felt that it might be better to have someone who wasn’t a Catholic write the Pope story.

The Notre Dame fire, happening at the start of Holy Week, is especially poignant to Christians because the sight of the flames devouring the Cathedral looks to them like a symbol of the destruction, fuelled by lack of understanding, of all they believe in. When the arduous re-construction begins, a huge amount of thought will need to be given to the purpose which the Cathedral is there to serve. A great many people will be involved in this exercise. Perhaps, after the pain and suffering of this saddest of weeks Parisians will start to witness a new beginning on a level deeper than we can, as yet, imagine. Our Lady of France, pray for us!