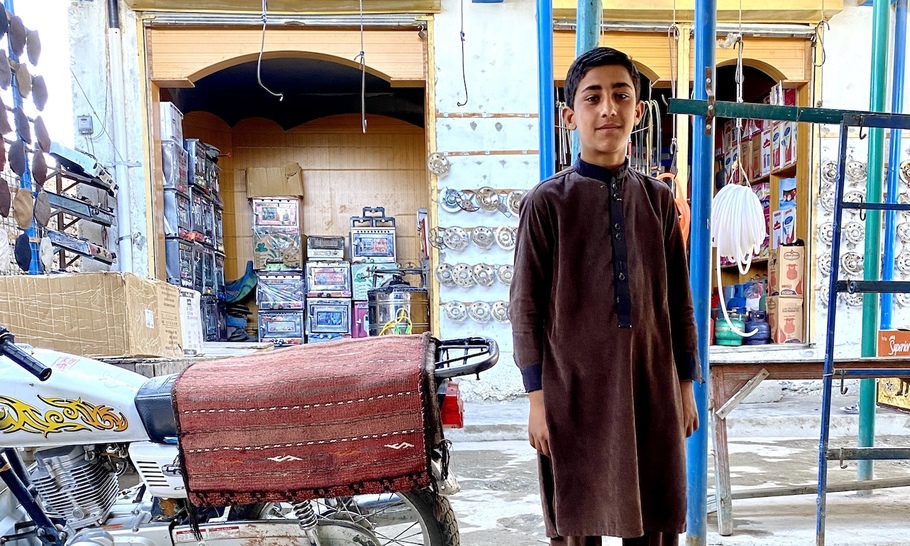 The last time I went to Khogyani, a district in Afghanistan’s eastern province of Nangarhar, was three years ago, to investigate the impact aerial strikes by US and Afghan forces were having on civilian life.

At that time, few people would make the 40-minute journey from the provincial capital, Jalalabad, due to the presence of the Taliban and the newly-emerging group of fighters claiming allegiance to the so-called Islamic State.

Like so many other districts, Khogyani had become a no-go zone. It was yet another district near a major city that people, including long-time residents, talked about with concern, but few outsiders risked visiting.

The road was dotted with makeshift burial grounds where the white flag of the Taliban flew next to the tri-colour flag of the US-backed government in Kabul. The further I travelled from Jalalabad, the less I felt the presence of the Afghan National Security Forces.

When I did arrive in Khogyani, I was immediately taken to a small, mud house where several elderly men, each with a gun strapped to his back, told me about life in one of the most drone-bombed areas in the world. Inside, a teenage boy served tea and a girl aged about three years old ran around as the chickens wandered in and tried to peck at the shoes that were laid out at the edge of the reed mat I sat on.

The men told of the terror that visited them each night with the dull buzz of the drones above them.

“When they kill your family, your children, of course you will pick up a gun. What other choice do you have,” they said, evoking a common story I’ve heard for years — that abuses by the government and international forces turn people towards armed opposition groups.

After hours of tea and talk, the men said: “It will be dark soon, you should go before you become part of the story you’re reporting on.”

It was as if they had read my mind.

Returning to Khogyani now, amid a seven-day reduction in violence between the Taliban, the US and the Afghan forces they back, things had changed drastically. The elderly men were gone, their 20-something sons speaking in their place, the little girl who ran around the house was now back in school and the forces claiming to be part of the so-called Islamic State had been expelled from Nangarhar.

The chickens were still there, though, trying to peck at my shoes before they were shooed away.

The mood in Khogyani seemed different this time.

A combination of the seven-day lull in violence — including the threat of US and Afghan airstrikes and night raids carried out by CIA-backed Afghan strike forces — and a year-long effort to secure the districts of Nangarhar had changed Khogyani.

Speaking of the night raids, residents said: “These Afghan forces would storm into a house expecting to see Taliban and instead all they’d find was women’s clothes hanging out to be dried. They would realise it’s only women and children here.”

But other households weren’t so lucky. Over the last year, Khogyaniwals who met me in Jalalabad or spoke to us over the phone, told me story after story about women and children screaming in fear and men who were either killed or never heard from again after the CIA-backed Afghan Strike Forces entered their households.

Even a one-week halt in such operations was a welcome respite to the people. For the first time in years, in a district that was previously known for armed opposition groups and the drug trade, people were hopeful for the future. Even those who had picked up arms against the government, after a drone strike or night raid had killed their families, were talking of the need for peace.

The attitude in Khogyani is part of a nationwide trend, with gatherings of hundreds, even thousands of people, across several provinces, all calling for a long-term peace. When the reduction in violence first took effect at midnight last Saturday, crowds gathered in the cities of Jalalabad and southern Kandahar, with people dancing, cheering and waving flags in joy.

More than anything, though, the people hoped that this one true push for peace would not be spoiled. Though the Taliban have largely reduced their activities, the central government in Kabul is embroiled in yet another election-related dispute, with the top two finishers each declaring their victory. Then there is the fear of regional politics, namely that Pakistan and Iran, both of which have been accused of supporting the Taliban, could convince the group to spoil the peace brokered by Washington.

Still, for the people just trying to live their lives, hope trumps fear during a brief period of calm.