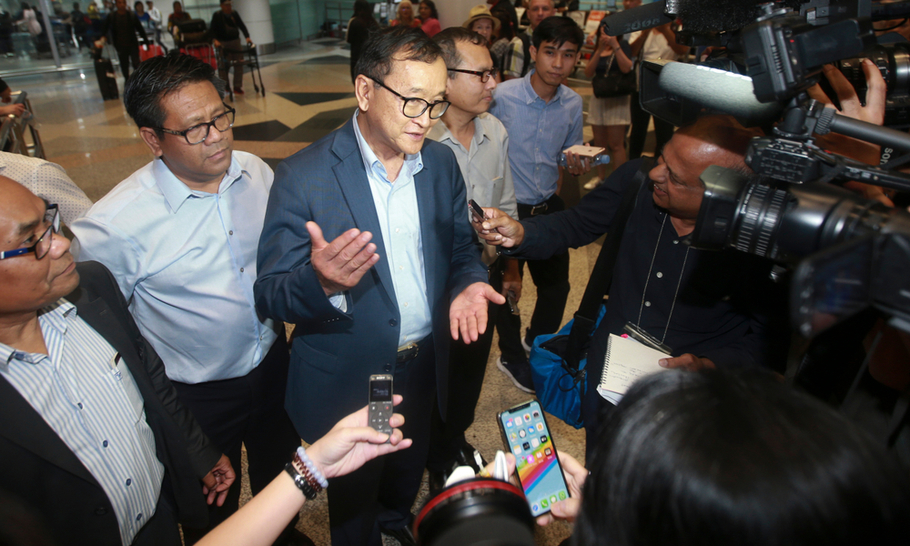 The release of political prisoners in Cambodia is unlikely to appease the harder heads in Washington and Brussels, where sanctions and the removal of trade preferences are beckoning, following the tiny and troubled Asian country’s descent into authoritarianism.

A recent report by the European Union and bi-partisan support for the Cambodia Democracy Act in the United States has unnerved Phnom Penh, which was again cast in a dreadful light by the antics of the self-exiled leader of the banned Cambodian National Rescue Party (CNRP).

For more than two months, Sam Rainsy — the comeback king of Cambodian politics who lives in Paris — threatened to march across the Thai border and lead a “tsunami of supporters” in a peaceful rebellion that would, he said, lead to the arrest of Prime Minister Hun Sen and, in his dreams, the restoration of democracy.

That boded badly for in-country supporters of Rainsy’s CNRP, who have paid a heavy price since they came tantalisingly close to defeating Hun Sen’s Cambodian People’s Party (CPP) at elections in 2013. That near-loss sent shivers through an elite that had become accustomed to power.

As Sam Rainsy ratcheted up the hype of his planned return, Hun Sen pulled out all stops. With Rainsy’s chief ally, Kem Sokha, still in detention on treason charges, the prime minister rounded up his opponents’ known supporters.

According to the United Nations, at least 52 people were arrested and at least 89 people charged with “plotting against the State” — a move described as “alarming” by Rhona Smith, UN Special Rapporteur on Human Rights in Cambodia.

Hun Sen also warned airlines that they would be complicit in an attempted coup if Sam Rainsy was allowed to board in time for his planned return on November 9 — Independence Day in Cambodia.

The Cambodian leader enlisted the help of the military-led government in Thailand which denied Sam Rainsy access to a Bangkok-bound flight aboard Thai Airways. Instead he flew to Malaysia, landing as Hun Sen marked Cambodian independence by deploying troops and placing the entire country on high alert.

The crackdown was reminiscent of the repression inflicted ahead of the 2018 election when dissent was silenced, the CNRP dissolved by the courts, the independent media vanquished, and Cambodia again became a one-party state with Hun Sen winning every seat contested at the poll.

Sam Rainsy’s bid, which was never a realistic prospect anyway, was foiled. He and others in his entourage were detained briefly in Malaysia and in the Indonesian capital Jakarta over the following week, as they attempted to criss-cross Southeast Asia and prolong their campaign.

That was helped by the authorities, who declined to extradite them, after the US warned their return to Cambodia could result in torture.

Sam Rainsy can, nevertheless, claim that he succeeded in shining the international spotlight on Hun Sen as the EU released its report on whether to remove preferential trade arrangements with Cambodia, which allow Cambodian goods into the EU with no tariffs. Hun Sen was also aware the report was about to land. His response was to free Kem Sokha — who is still banned from political life and from leaving the country because his treason charges remain.

That, and the release of at least 70 CNRP supporters who human rights activists say should never have been locked up in the first place, was widely seen as an attempt to quell international criticism of his regime that would accompany the EU’s findings.

It was typical political manoeuvring by Phnom Penh, which the diplomatic community has become accustomed to. Patience, however, is in short supply.

The 70-page EU report, marked “sensitive”, remains confidential, but sections have been leaked. It is scathing, and notes a further deterioration in human rights since the review process was launched in the aftermath of last year’s election.

The EU’s final decision is due by February and Cambodia was given a month to reply, as Sam Rainsy packed his bags in Jakarta and flew home to Paris.

In the meantime, the Cambodia Democracy Act, enabling sanctions against Cambodia’s ruling elite for undermining democracy and violating human rights, is moving forward. It was unanimously passed in the US by the House of Representatives in July and its supporters are hoping it will pass through the Senate and is signed by President Donald Trump before year end.

Chairman of the House Foreign Affairs Committee, Congressman Eliot Engel, said the bill would send a clear message that the US stood “shoulder to shoulder” with the people of Cambodia.

“Congress will hold Cambodia’s leaders accountable for their assault on democracy and violations of human rights,” he said from the floor of the House. This has Hun Sen’s coterie of billionaires worried.

Cambodia is moving rapidly towards sole dependency on China, which has backed Hun Sen’s assault on pluralism by investing billions of dollars in strategically important assets, like the ports at Sihanoukville on the south coast.

But this will not be enough to withstand the coming storm.