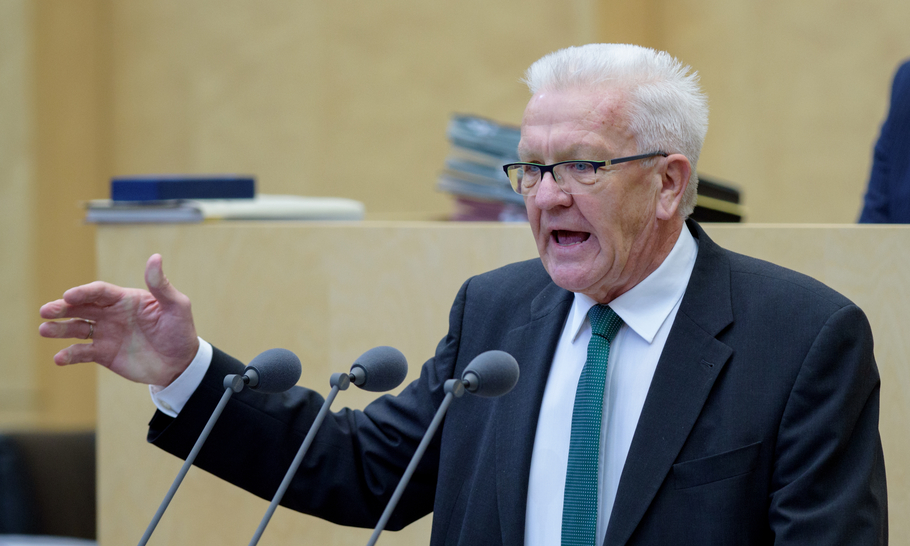 Winfried Kretschmann at the Bundesrat in Berlin (Shutterstock)

Unaccustomed as we are to good news on the pandemic, let us spare a thought for our less fortunate neighbours across the Channel. In the UK, infections and deaths are down to their lowest level since last October. In France and Germany, by contrast, Covid cases are rising, while in Italy a new lockdown has just been imposed. The widening gap is largely down to vaccination. In all three countries, just over 7 per cent of the population has had at least one dose of vaccine, compared to 35 per cent in Britain, with nearly 25 million people having had their first jab. Whatever scare stories about the Oxford vaccine our Continental friends may choose to believe, it has saved thousands of lives here and is the cornerstone of our exit strategy.

The political impact of the EU’s vaccination chaos is now being felt across Europe. In France, Emmanuel Macron is blamed for the slow pace of vaccination and Marine Le Pen is confident that she will take revenge on the President at next year’s election for her crushing defeat in 2017. In Italy, as Derek Gadd explains here, the pro-EU coalition government is so fragile that it could be replaced at any time by an alliance of populists, nationalists and neofascists that could even result in Italexit. Both governments are suffering for having relied on the European Commission’s failed vaccine procurement policy, which threatens to prolong the Covid crisis through the summer.

It is in Germany, however, that unpopularity caused by incompetence in Brussels is having the most direct impact. On Sunday elections in two south-western states of the Federal Republic revealed voters’ dissatisfaction with Chancellor Merkel and her Christian Democratic Union (CDU). The party lost ground in Baden-Württemberg and Rhineland-Palatinate, both formerly among its strongholds. In the former, the Greens strengthened their hold on power, while in the latter the Social Democrats (SPD) also consolidated.

With September’s federal elections just six months away, the CDU must now reckon with the possibility of being ousted after 16 years in office. Angela Merkel has vowed to step down and Armin Laschet, her successor as party chairman, is so lacklustre that he may not be chosen as the CDU’s candidate for Chancellor at a selection conference next month. After the latest electoral reverses, delegates might plump for Markus Söder, the Bavarian state premier, or Jens Spahn, the Health Minister, both of whom are more popular than Laschet. Either choice, however, would be a gamble. Söder leads the Christian Social Union, the CDU’s more right-wing sister party; no Bavarian has ever been Chancellor of the Federal Republic. As a key member of Merkel’s Cabinet, Spahn cannot easily distance himself from its policies; he would also be Germany’s first gay leader in centuries, indeed since the colourful monarchs Ludwig II of Bavaria and Frederick the Great of Prussia.

For obvious historical reasons, Germans prefer to play down the importance of charismatic leaders. They generally prefer pragmatism and teamwork. Yet if coronavirus has proved anything, it is that in a crisis, leadership matters. In an ageing society, voters often put their faith in experience. Winfried Kretschmann (pictured), the long-standing Green prime minister of Baden-Württemberg, is a youthful 72; he campaigned on the slogan: “You know me.” It worked. The grand old man of German politics, the Bundestag Speaker Wolfgang Schäuble, was absolutely right to judge that Sunday’s election was “all about personalities”.

In what has become a volatile six-party system, with a spectrum ranging from the former Communist Left Party to the far-Right Alternative for Germany (AfD), it is hardly surprising that most voters opt for stability, security and familiarity. Mrs Merkel has successfully embodied these qualities at the head of a series of centrist coalitions for most of the 21st century. As she leaves the stage, however, there is no comparably reassuring figure to fill her shoes.

Across the Atlantic last November, an electorate that had tired of charisma voted for a grandfatherly President whom it is hard to dislike. Is there anyone comparable to Joe Biden in Germany? The only name that springs to mind is Schäuble. Like Biden, he is 78; unlike Biden, nobody has questioned his mental acuity. There are doubts about Schäuble’s physical health: he is confined to a wheelchair after an assassination attempt decades ago. But his disability did not prevent him being an effective minister, CDU leader and, since 2017, the most highly respected parliamentary Speaker ever. Once seen as the heir to Helmut Kohl, Schäuble is a unifying symbol at a time when the country is deeply divided. Could he, like Biden, emerge as a caretaker to lead his country out of the pandemic?

There are other elder statesmen available, too. The Greens are threatening to replace the Social Democrats as the second largest party: baby boomers who were in their twenties when it was founded forty years ago are now flocking to a party that has outgrown its radicalism. As a septuagenarian with moderate credentials, the newly re-elected Winfried Kretschmann is typical of his generation. Could he step from provincial politics to the national stage in September? Berlin’s present coalition of CDU and SPD is unlikely to continue. One alternative would be a new “grand coalition” of Christian Democrats and Greens, assuming that the latter do indeed trounce the SPD to become the second largest party. The other is a “traffic light” coalition of Red (SPD), Yellow (liberal Free Democrats) and Greens. Both such broad-based coalitions have worked well in some states, but have never yet been tried at the federal level. Whatever happens, the extremes will, as usual, be excluded from power. For the moment, the Mavericks of the AfD have been held in check; the party received only about 10 per cent of the vote in Sunday’s regional elections. But the nationalist Right thrives on perceptions of failure in Brussels and Berlin, especially in the disaffected former Eastern Länder. If they are to kept at arm’s length from power, Angela Merkel needs to raise her game over her last six months. The legacy of her long career at the summit of national and European politics cannot be to queer the pitch for her successor by delaying Germany’s emergence from the pandemic.