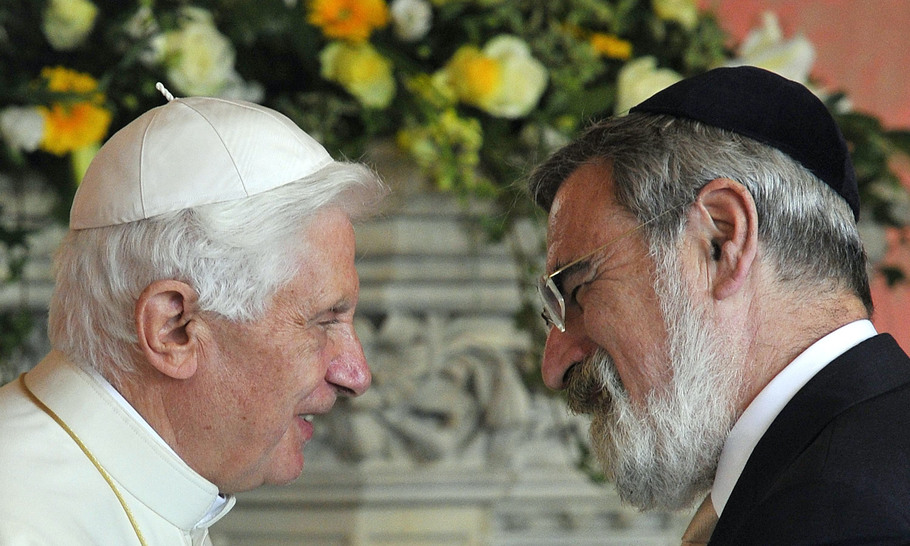 Something happened in the last week that seemed to me to be enormously important.

To understand just how important it was, we need to push the elephant out of the room. It wasn’t the US presidential election. Straight up, I didn’t watch a single news bulletin nor engage in a single discussion on the election. As it happened, I was seriously invested with colleagues in a symposium and you just have to stay focused. But that was only a part of it.

Yes, what is unfolding across the United States is compelling and it is hugely important. But life eventually teaches us is that we should not invest too much of our scarce emotional capital on events we cannot control, other than through prayer.

This takes us to what happened that was enormously important. A wise man died – and the world mourned his passing.

Rabbi Jonathan Sacks died last Saturday. His wisdom, and his passing, spoke to people of all faiths and none. There is a wonderful picture of his meeting with Benedict XVI during the Pope’s visit to the UK in 2010. Both men radiate joy at the encounter — the personal encounter is always at the heart of wisdom. You seldom, if ever, see wise people who are negative or miserable.

In the world in which we live such wisdom is a very precious gift. For sure, it has a central place in the vocation of teaching, not least in my own subject, economics. You simply cannot comprehend, much less teach students, the roots of the madness at the epicentre of the banking collapse, or reflect on its consequences, without being struck by the flight of wisdom from boardrooms and chancelleries. Michael Lewis, Carmen Reinhart and Kenneth Rogoff, James Galbraith — they, and other economists, have all provided visceral insights into what unfolded. But wisdom helps discern a crisis before it begins – before it metastasises through our politics, our economies and our country. Wisdom is not handed down from the compliance watchdogs of social media, though we may acquiesce in the lie that it is. Wisdom is both more rigorous and gentler than that.

Rabbi Sacks had a brilliant undergraduate career in Cambridge, where he studied philosophy. That tells us something about the importance of a rigorous grounding in philosophy. But it was his search — the search, the search! — for how best to harness his intellect to his faith in addressing the cancer at the heart of the West’s ideologically distorted society that speaks of the calibre of the man.

Once his faith and his convictions had solidified, he got stuck into bringing them into the “market square”, from synagogues and Jewish academies to national and global media. He faced down, with great grace, the criticisms that are part and parcel of authentic leadership. He showed empathy with, and support for, Yitzak Rabin — who might have brought peace to the Middle East, had he not been assassinated. It prompts the question: what are they afraid of, these assassins? They fear a truth greater than their fragile and flawed world view, a fear they are afraid to acknowledge.

Rabbi Sacks never feared affirming his faith in the public arena. Christians have much to re-learn from this positivity and courage. A reluctance to do so demonstrates a lack of confidence in what you affirm — that it does not add something precious to the truth that others in good conscience affirm. The failure of recent government to respect the conscience of the medical professions was akin to expecting Rabbi Sacks to check his conscience into the cloakroom of the House of Lords or the BBC before speaking on the issues of the day.

I have a dog-eared copy of his book Celebrating Life. It has a good photograph of his wife, Elaine, and himself on the front cover. It sets the tone of the book. It’s a collection of articles that he had previously published in newspapers. They are reflective (for example, on how he had once nearly drowned), they are chatty and they are incredibly incisive. He was wholly invested in the primordial importance of family.

In one of the essays he reminds us that children have fared poorly in our world — and that it shows. It matters very much indeed how we regard child-rearing, he writes, and not all families are the same in terms of their impact on the welfare and flourishing of children. Future generations, he argues, will find it hard to understand how we convinced ourselves otherwise. Like all great teachers, he told it like it is. Here, as elsewhere, he affirmed a truth that our contemporary politics finds it hard to accept. But he understood better than most that the truth always sets us free to reflect, and to change.

Rabbi Jonathan Sacks was a husband and father — a person who affirmed his faith, a teacher and a wise man. That is the cloth from which his life was woven. He has left an extraordinary legacy in his books and broadcasts. He has left this world a better place. Like millions of other people, I mourn his passing as a personal loss. That same wisdom speaks to the travails of the US, that other event of last week.