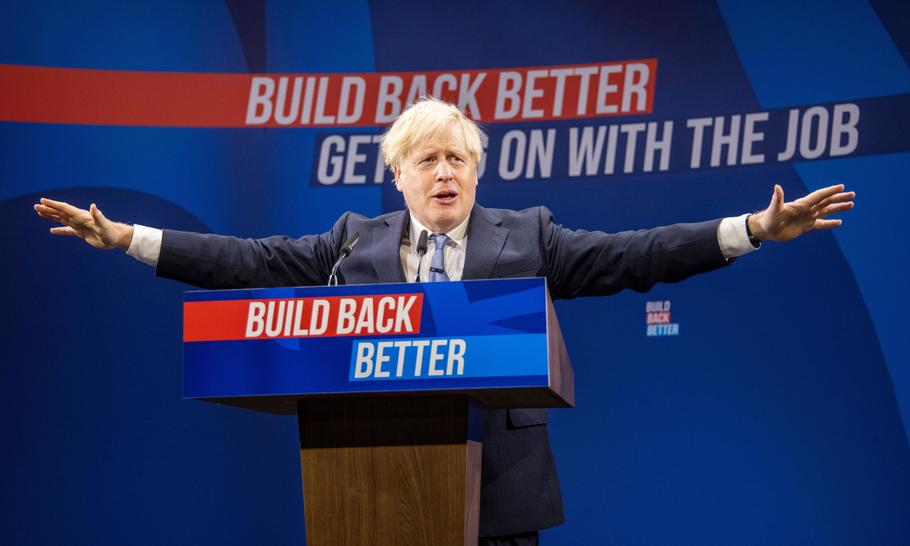 Why is Boris Johnson the Prime Minister? For quite a few exasperated people, who have never got over their shock at the 2016 referendum result, this is a genuinely baffling question. How can a serious country have such a seemingly unserious person at its helm, they ask. Others resent him as a product of privilege, whose Woosterish persona is a throwback to a bygone era. His bitterest foes see him as a wolf in St Bernard’s clothing: as ruthless in grinding the faces of the poor as his populism is sinister.

Whether they see him as a bumbling buffoon, a toffish bounder or a dangerous demagogue, the anti-Boris brigade are working themselves into a frenzy of loathing after yesterday’s speech in Manchester. Some of them would doubtless like his head on a pikestaff, as the prime exhibit at a gruesome display of history’s greatest villains, just as Madame Tussaud cast waxworks of guillotined heads in the Terror. They go on about his childish aspiration to be “world king”, or at his harmless addiction to classical allusions, as if this made him a wicked Roman emperor, straight out of the British Museum’s current Nero show. In their fantasy of Tory iniquity, Boris cracks jokes while London burns.

In the real world, incidentally, such extreme verbal hostility has real consequences. Ask Iain Duncan Smith, the former Conservative leader, who was stalked with his wife Betsy by the far-Left and hit over the head with a traffic cone. The police took this assault in broad daylight on the streets of Manchester seriously and arrested five people, but the hateful comments about the victim on social media were disgraceful. In recent years, we have been more familiar with attacks on politicians by Islamist and far-Right thugs, but the extreme Left are capable of violence too. Democracy and its institutions — including party conferences — is impoverished if our elected representatives cannot mingle with the demos (i.e. us) without fear of grievous bodily harm, or worse.

Back to the question: why is Boris the PM? Any impartial observer who has watched his conference speech, whether in person, on TV or online, would have to admit that it was at the very least a polished performance. In truth, though, it was rather more than that. From start to finish, this was a leader on top of his form. At a technical level, he effortlessly packed twice as much into 45 minutes as Sir Keir Starmer (mercilessly lampooned as “Captain Hindsight”) managed to do in his 90 minutes of tedium at Brighton last week.

What Johnson can do like nobody else in politics is to marshal an argument, sweeten it with humour and render it memorable with eloquence. The vision he set out yesterday was of a nation emerging from decades of low wages, low skills and low productivity, all made possible by importing cheap labour.

By a supreme irony, the new social contract made possible by our newfound freedom of manoeuvre should mean that in future Britain will be more like Germany: better paid, better educated and more productive. Boris the Brexiteer is offering to make our economy more rather than less European. Hence the tax rises to pay for better health and social care — as Germans already enjoy, though we are a long way from emulating their insurance-based system. Hence also the promise of better transport, housing and communications infrastructure — all of which tend to be better on the other side of the Channel, or even the Irish Sea. He even found time to mention roadside facilities for HGV drivers, so that they would no longer be obliged to “urinate in the bushes”. Levelling up turns out to mean delivering Teutonic efficiency. The only thing missing from his vocabulary was Vorsprung durch Technik. There was, however, plenty of upbeat detail about British entrepreneurship, scientific prowess and some all “values”, the supreme example of which was the Oxford-AstraZeneca vaccine, uniquely distributed across the globe at cost.

Boris has a sure touch with his audience. Not for him Sajid Javid’s clumsy demand that families should look after their own dementia sufferers, rather than rely on the state — as if millions of us weren’t doing that already. Instead, the PM showed empathy for those whose affliction meant that they were unable to pass on anything to their children. He was sympathetic to Generation Rent, too, promising a new homes for heroes of the pandemic.

One group, however, appears to have taken his exhortations personally: business. From Lord Wolfson of Next to Tim Martin of Wetherspoon, there is a chorus of indignation at the suggestion that they need to dig deeper into their pockets, rather than allow low-paid staff to be subsidised by the taxpayer. Higher energy costs, higher NI employer contributions, supply shortages and inflationary pressures mean that profit margins are low.

Now here comes a Prime Minister who claims to worship at the shrine of capitalism sounding like an old-fashioned Marxist: nothing is too good for the workers. No wonder the Downing Street drinks class is feeling unloved. “PM hit by business backlash,” reads the headline in The Times.

Yet this bouleversement actually reveals the genius of the man who provoked it. Being bashed by the bosses will do Boris no harm at all in the country. And the captains of industry will get over it, because they have nowhere else to go. There is no Peter Mandelson at Keir Starmer’s elbow, eager to whisper in their ears that there is nothing wrong with being “filthy rich” as long as they pay their taxes. And some of them really could adjust their mindsets just a little, especially when it comes to exploiting offshore havens to finance absurdly lavish lifestyles. Once again, the German model is pertinent: even the billionaires there avoid conspicuous consumption. Lidl Tories like German-owned supermarkets because there are low prices and no frills. It doesn’t mean they don’t like Waitrose too, when they can afford it.

Boris’s genius is also evident in reaching the parts that other politicians cannot even imagine, where aspiration meets reality. The more difficult everyday life is for most people, the more they need someone to raise their eyes to the horizon, to flatter their accomplishments and make them smile. Hence the appeal to the “British spirit”, the lines from Gray’s Elegy and the joke about “Cruella de Vil QC” who allegedly downplays dognapping. The way that he played with the audience, reminding us that the poet had lamented the lost opportunities of illiterate youths and asking where the elegy had been written: it all enabled him to tell a story, a story in which Stoke Poges somehow symbolised that British spirit. It was a reminder that he has not forgotten the Tory faithful, those sans culottes of the shires who staged an uprising in the Chesham and Amersham by-election last summer.

The truth is that Boris Johnson is the Prime Minister because right now he is the best man for the job. We may or may not be at peak Boris now, but one has the impression (almost certainly an illusion) that this Balliol boy dominates the scene almost without trying. Politics may be the art of the possible, as Bismarck said, but the real skill is to make people believe that they can achieve what hitherto they thought impossible. Boris has mastered that art. No one else comes close.