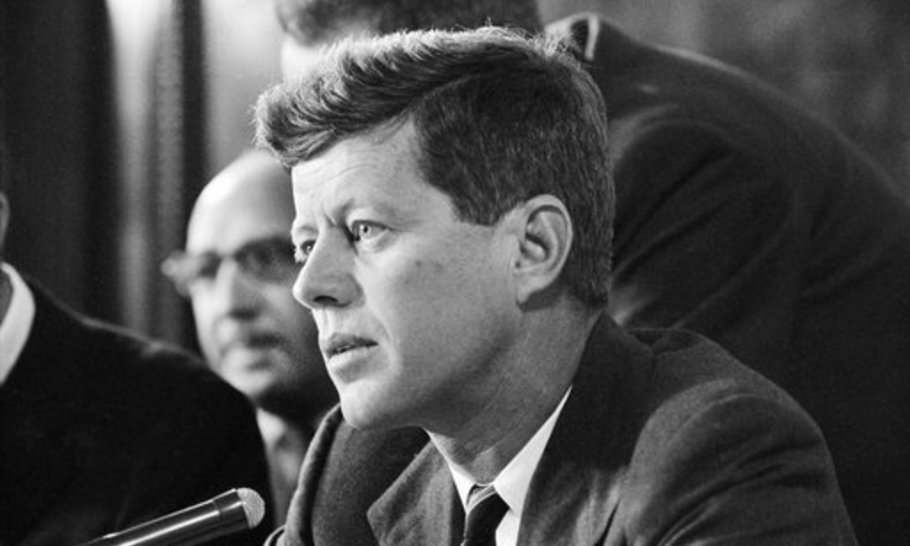 It was a large room, dimly lit, more a shrine than a small museum. You couldn’t help but notice that one or two visitors were crying gently. Your eyes went automatically to the window in the corner. Once a book depository window overlooking a non-descript Dallas highway, now a window onto the lost dreams and hopes of many Americans.

It’s remarkable how the Camelot myth has persisted. Yes, it all happened in the 1960s when celebrities and heroes weren’t ten a penny, the result of many thousands of clicks on a short video, or a hundred circuits of an old soldier’s garden. Today we know so much more about John F Kennedy. He was no knight in shining armour and the White House no Arthurian castle. But he still retains his fascination.

Believing in your own myth is at the heart of political charisma. And people so seek myths and charisma when it comes to political leadership. Jack Kennedy had that gift.

In autumn last year, nicely timed for Christmas presents and for lockdown reading, the Harvard professor and Pulitzer Prize winner Fredrik Logevall published Volume One of his JFK to rave reviews. At almost 800 pages, this Kennedy biography covers his life from 1917 to 1956. It tells the story of the Kennedy family’s influence on JFK’s precocious rise to political fame, knitted elegantly into the wider context of internal US history and the external global events of the period. This volume ends with JFK’s decision to run for the Presidency. The book deserves its plaudits.

That JFK was a scion of a supercharged, go-getter Boston-Irish Catholic family — with a clever, pious and politically adept Catholic mother and with a larger than life, philandering, very rich and well-connected father, the isolationist wartime US ambassador to London — provides Logevall with his leitmotif. The family mattered a great deal, not only personally but politically. It supplied JFK’s core staff, acting as both mission control and launch pad into politics: naval war-hero turned bored congressman, widely travelled successful author, sparkling young senator, failed Vice Presidential candidate. It was all oiled by his own charm, astute political judgement, prodigious appeal to women, but also by his father Joe’s money, contacts, and burning ambition for his oldest two sons, plus Ted Sorensen’s draft speeches. And, of course, Jack’s great courage in the face of pain and peril.

Apart from cultivating the Irish-American vote and suffering tragic deaths in the family, how very different this story is from that of Joe Biden, America’s second Catholic President. Kennedy made it very clear in his pursuit of the presidency that his Catholicism, like his ethnic background, would be entirely marginal to his conduct as President. You could not say that of Joe Biden. Yet the same universal dilemma in climbing the greasy pole, how to balance a strong sense of right and wrong with the moral compromises necessary for power at a state and national level, faced them both.

JFK had an advantage that Biden missed. Catholicism in the 1950s was strongly and positively associated in the public mind with a major political theme: not the divisive culture wars, but the Cold War and anti-communism. This was not unalloyed good luck. Kennedy faced the problem of handling another Irish Catholic politician, Senator Joseph McCarthy, a Republican who weaponised anti-communism. The Wisconsin senator was a close friend of JFK’s father, much liked by brother Bobby and dated two of the Kennedy daughters. He was an early version of Trump — able to make big lies stick and manipulate popular fears and hatreds, destroying lives and careers. JFK, while privately deploring McCarthy’s tactics, never clearly denounced him, even when Eisenhower, a much loved Republican president, openly criticised his methods and conduct.

JFK’s shabby compromise obviously bothered him. During the worst of his many illnesses, he gathered together the stories of eight senators who had taken a lonely stand on principle or conscience and isolated themselves politically, precisely what JFK himself had declined to do. The result was a 266-page book: Profiles of Courage. Though hurriedly researched, it did Kennedy no harm in the Senate. “Politics is a jungle, torn between doing the right thing and staying in office”, he wrote in his notes “– between the local interest & the national interest – between the private good of the politician and the public good”.

How will Biden react if and when his McCarthy moment comes? Perhaps it already has, on the abortion issue. That said, it would be preferable if Biden’s Catholic episcopal detractors understood that such moral dilemmas went with the job, and did not encourage single-issue voting.

Logevall, who is generally non-judgemental, allows his overriding respect for JFK to show through here. “Profiles in Courage”, he tells us, “is an ode to the art of politics, to the hard and vital work of governing in a system of conflicting pressures and visions”. And so it is, an antidote to the dismissive clichés “all politicians are the same” and “in it for themselves”. But in Profiles JFK tries to make amends for putting his family’s friendship with McCarthy and his Irish Catholic vote in Boston before his conscience. The book is also an ode to a different sort of courage and, in this sense, is a self-affirmation. JFK suffered from acute back pain and Addison’s disease. He nearly died twice, once as a result of a surgical procedure on his back that he was warned would be dangerous. It was. In a coma in 1954 he was given the last sacraments, but pulled through and was nursed back to health by Jackie. He compiled and topped and tailed Profiles while convalescing.

Times were different back then. Kennedy could and did use crutches, without a telephoto lens capturing his condition and calling into question his health and career. His phenomenal philandering, which he seems to have inherited from his father, was discreetly ignored and kept out of the public eye. Impossible to imagine this happening today.

JFK is a great read. Not salacious, not Camelot with condoms, not an apologia, but a deeply researched and sensitive portrayal of a very complex and courageous man. This is a book that is itself an “ode to the art of politics” and a profile of courage.