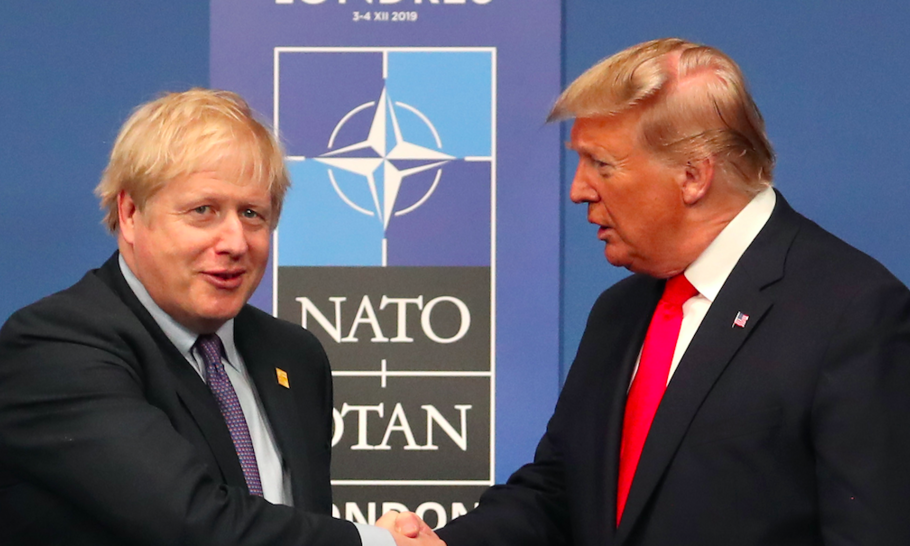 Much of the world may have been shocked by Donald Trump standing at a White House podium and lying on an industrial scale as he condemned the entire democratic process of the country he nominally leads. But nobody should be surprised. This is the strategy he said he would deploy, and it is a strategy that had been drafted four years ago when he had not expected to beat Hillary Clinton legitimately.

It is also all of a piece with the way he has governed since Day One. Hands up who remembers what Trump did on his first full day in office? So much has happened in the intervening four years that you can be forgiven for not knowing the answer. I remember it vividly. He visited the CIA HQ. Ah interesting, I thought, imagining in my naivety he might be going there to build bridges with the security agencies he had spent much of the election campaign attacking. And what was his top line, as he spoke to a roomful of intelligence officials? Foreign policy? Terrorism? Security? No. He pointed to the journalists at the back of the room, raged at “fake news,” and attacked the media for reporting that there had been more people at Barack Obama’s inauguration than at his own (which there had.)

Amid the storm that followed, his adviser Kellyanne Conway, confronted with the facts that debunked his claim to have had bigger crowds, said that the Trump White House would be giving “alternative facts”. Four years ago, they did it with crowd numbers. Now, Trump is doing it with votes, giving the world an alternative election result to the one that is actually unfolding. Truly, truly shocking. But not surprising. Far from it.

Just as shocking is the reaction of the other leading figures in the Republican Party. People like Mitch McConnell and Lindsey Graham have become well-known names around the world for their role in supporting Trump, and normalising his deeply abnormal Presidency. Surely, I thought, as Trump meandered to the end of his falsehood-laden ramble, they will come out strongly against this? But no. There would appear to be no depth so low that they will not sink there with him, rather than risk upsetting Trump’s more cultist supporters.

Trump did enormous damage to American democracy, and America’s reputation around the world last night. But every minute the so-called Grand Old Party allows this charade to go on, they contribute to the damage.

Of course these are difficult calls for everyone. Emotions high, everyone tired, fears things could turn ugly and violent, the future of a country at stake, the Trump succession game already underway, and Trump determined to stay involved. But in the end, leaders have to lead, and when the actual leader has shown himself so unfit to do so at this moment in American history, unable to separate out his own interest from the country’s, Republican leaders have to find their spine.

Leaders of other countries around the world are also making difficult calculations. I understand why Boris Johnson and Dominic Raab did not get too engaged in questions about the rights and wrongs of Trump’s first claim that the election had been stolen. But if that second statement last night had been made by the leader of any other country in the world, the UK would have led the charge to condemn. I am sure there have been others, but the last President I can recall refusing to accept a Presidential election count so brazenly was Mahmoud Ahmadinejad in Iran in 2009. That is some company for the President of the US.

There has been so much focus on America that even I, self-confessedly obsessed with Brexit, and with the unsuitability of Johnson and this Cabinet for the challenges facing us right now, have barely been following anything happening in my own country in recent days. What I do know, however, is that on Brexit, there is still no sign of the deal that was promised, and the only options now left open are a bad deal or no deal. On Covid, the Chancellor Rishi Sunak seems to be foundering as he produces one plan after another. The central elements of Johnson’s Covid strategy continue to fail at vast public expense, and England is now in a lockdown many will refuse to obey because of failed government communications and the lasting impact of government figures breaking rules they set for others.

Johnson himself said that not getting his oven-ready deal, or something like it, would be a “failure of statecraft”. But so is the fact that he has too many diplomatic eggs in the Trump basket. It is not entirely Johnson’s fault that Trump labelled him “Britain Trump”. But it is his fault that he is seen in that way by people other than the Narcissist-in-Chief, who sees literally everything through the lens of his own interest and place in the world.

Let me say a rare positive(-ish) word about Johnson — he is not as bad as Trump. But he has many of the same qualities and characteristics. He has a casual relationship with the truth in his personal and political life and a ministerial team built on loyalty not talent. On his watch there has been increased croneyism and corruption in appointments and government contracts. He has a greater obsession with media than with people and contempt for the other side, and for Parliament. His boycotting of media critics has been pathetic, as has his disrespect for norms, conventions and institutions, from the BBC to the Queen and, as we saw recently with the Internal Market Bill, even the rule of law. He is indifferent to detail and to the consequence of policies beyond the personal, as brilliantly set out by Rory Stewart in his excoriation of Johnson in the TLS.

If he has any sense, Johnson will use this moment to analyse why Trump has lost, and shed some of the qualities and approaches so closely associated with both of them. He is younger than Trump, so ought to be able to change more readily.

The new US President-elect, Joe Biden, is older than both of them. He won’t be changing his basic ways, and that is a good thing. The world needs some stability and calm right now. But Johnson starts in the so-called special relationship from a very bad place. He got too close to Trump. He is seen as unreliable, and unserious. And whereas Johnson talks the talk on being committed to the Good Friday Agreement, Biden really is. Biden sees the Good Friday Agreement as being at risk from Johnson’s cavalier approach on Brexit — that fact has now risen high up Johnson’s agenda, not least because it makes a post-Brexit trade deal a lot harder.

Trump has failed. Johnson should learn some lessons, or go the same way, knowing the Tory Party does not mess around with its leaders the way the Republican Party is doing right now.