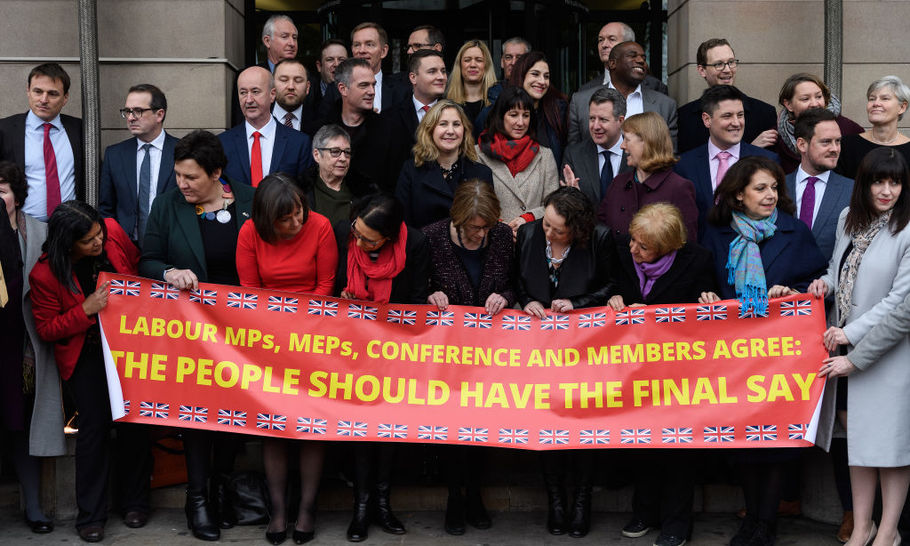 Corbyn supporters are split on whether to support a second referendum. Owen Jones and Paul Mason both endorsed a public vote last week (although the former expressed his reluctance while the latter did so with gusto). They asserted that the middle ground on Brexit has been eroded, and that the choice is now between a calamitous No Deal or a return to the status quo ante, and that, consequently, Labour must drop its plan for a soft departure. Instead, it should embrace Remain as the only alternative to a mismanaged Tory exit. Facing Johnson’s ascent to No. 10 and Farage’s horrifying comeback, Labour must offer more than equivocation and triangulation, according to these commentators, it must pivot towards ‘remain and reform’.

Ronan Burtenshaw countered this argument in his Tribune editorial . For him, Labour’s tentative steps towards Remain reflect a disquieting political trend: the replacement of ‘class interests’ with ‘progressive interests’. It was only by insisting on the primacy of class issues – such as austerity, wages, taxes and industry – that Labour captured so much of the vote share in 2017. By campaigning for EU membership (as the so-called ‘progressive’ option, favoured by right-minded Guardian readers), Labour would turn away from popular class-based politics towards a volatile and misguided culture war. It would abandon its working-class supporters, as well as its economic agenda, to court liberal metropolitanites who see Leave and Remain as clashing identities, rather than complex policy positions. Burtenshaw points out that this capitulation to Remainers is a massive risk, not just because two-thirds of Labour’s target seats are in Leave voting areas, but because it is economics – not culture – which gives the Corbyn project its substance.

Burtenshaw’s critique of Jones and Mason is perceptive. He is correct that Labour cannot win a general election by becoming a mouthpiece for the People’s Vote campaign, which most of the country rightly views as vacuous and elitist. It would also be hasty of Corbyn to assume that the latest polling – which puts the Lib Dems and Brexit Party ahead of Labour and the Tories – should prompt a major shift in Brexit policy: the polarisation of opinion along this Leave-Remain axis is a result of soon-to-be forgotten European elections, and it is unlikely to linger past next month. On top of that, it is hard to see why Labour would necessarily win back embittered Remainers by supporting a second referendum. If the voters whom Labour wishes to court care solely about staying in the EU, then they will support a party that has forcefully and consistently taken this position over the past three years, not one that has been overtly divided and ambivalent about it. The fact is that Labour cannot be a Remainer outfit: many of its MPs, members, frontbenchers and voters are stridently opposed to EU membership, and their opposition will not abate because official party policy has changed. The ‘remain and reform’ makeover which Mason envisions could never be anything but a disingenuous rebranding exercise, and it will undoubtedly be seen that way by the electorate.

These factors, along with the socially divisive implications of a second referendum, should make Labour wary of mimicking Lib Dem Brexit policy. As I have previously written in these pages, my preference is for Corbyn to become an uncompromising ‘Lexiter’. He should be more critical of the EU as a neoliberal straitjacket and more vocal about the benefits of leaving. Labour should produce a series of policy documents on nationalisation, state aid, immigration, foreign affairs and workers’ rights, each of which would explain how radical change is inhibited by the EU, and how a post-Brexit Labour government would exploit its newfound autonomy in these areas.

However, considering the imminent threat of an anti-Corbyn coup, and the potential for rebellious Remainer MPs to sabotage the party’s electoral chances, the viability of such a Lexit position is uncertain – and this is something that socialists cannot afford to ignore. It would be senseless for the left to back Brexit if that means giving ammunition to reactionary Labour politicians who will derail the Corbyn movement; in which case the Labour leadership could have no choice but accept a public vote. If this is the unfortunate position that we are in (and some of Corbyn’s closest allies seem to think it is), then Labour’s full-scale support for another Brexit ballot is inevitable. So be it. But if Corbyn is backed into this position, he must couple this support with a caveat: in the event that Britain votes to Remain, a Labour government will thwart the EU’s neoliberal programme at every turn. It will contradict state aid directives, defy the unjust rulings of the ECJ, disobey restrictions on nationalised industry, and formulate an independent immigration policy to counter the EU’s racist and inhuman one. If Labour is forced to surrender its soft-Brexit plan, the alternative should not be an unworkable accommodation of socialist principles with EU technocracy. We should not fall for ‘remain and reform’; we must strive to remain and resist.