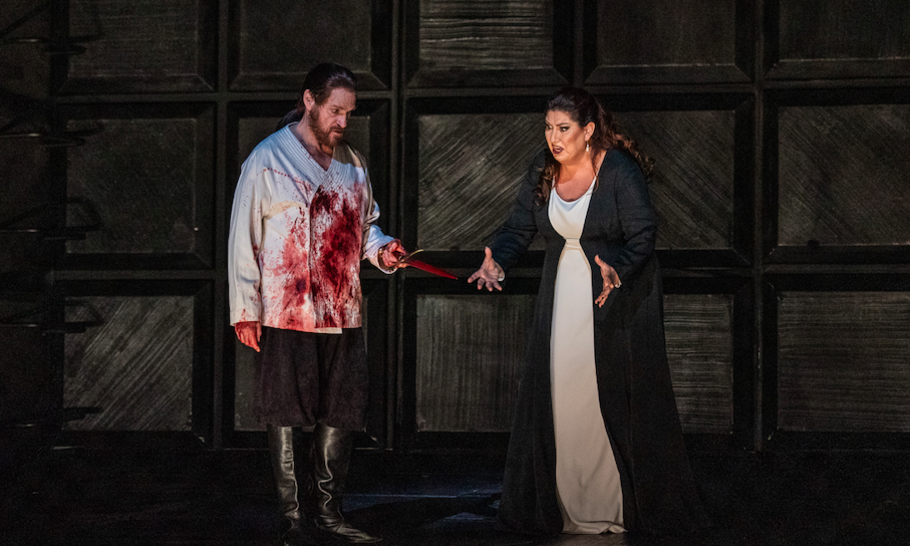 The Royal Opera’s new revival of Phyllida Lloyd ’ s 2002 production of Verdi ’ s Macbeth is superbly staged, with Anna Pirozzi stunning in the role of Lady Macbeth. She had previously shared the part with Anna Netrebko, but for this relatively short revival of six performances she is the main attraction.

In the original 1847 production Verdi had rejected a soprano with “ the voice of an angel” saying “ Lady Macbeth ’ s should be that of a devil” . Ms Pirozzi ’ s did the trick.

In the finale of Act I, when Duncan ’ s dead body is revealed, she soared above everyone, showing the sharp edges that befit the instigator of his murder.

The main feature of this production is a large golden cage, open at the front, that appears in Act II. Macbeth and his wife may have taken the throne after murdering Duncan, but they are trapped. Their magnificent golden gowns contrast starkly with the costumes of those around them, and in the end we see Macbeth ’ s lifeless body held up only by the bars of the cage. The imagery is clear, as are the dimly lit and elaborately dressed horses that bring on the eight kings conjured up by the witches in Act III, showing Banquo ’ s descendants who will occupy the throne.

Banquo himself was superbly sung by the excellent bass Günther Groissböck, later appearing as a ghost, as large as life but vanishing as courtiers flow this way and that. In the original production in Florence, the singer engaged as Banquo objected to the part since he would have to appear later without singing, but Verdi would have none of it: “ Singers must be engaged to sing and to act… it would be monstrous for someone else to play the ghost, for Banquo ’ s ghost must be immediately recognisable as Banquo”.

Verdi was inaugurating a new standard of opera, and in Macbeth he planned out the scenario and a prose libretto from Shakespeare ’ s play himself, before handing it to Francesca Maria Piave to put into poetry. He claimed at the time that it was “ dearer to me than all my other operas”. By this stage in his career he was beginning to have the clout to make demands of theatre managements to do his bidding. He did not want to be another Donizetti, producing yet another opera for each busy season. He adored Shakespeare, though only towards the end of his life did he produce further operas based on the Bard’s plays, Otello (1887) and Falstaff (1893).

Macbeth enjoys magnificent choruses, and the singing of the witches, in particular, was fantastic, aided by dancers who added movement and energy. David Junghoon Kim sang a fine Macduff, and Egor Zhuravskii a calmly noble Malcolm at the end. In the title role, Simon Keenlyside showed a nobility of vocal line suggesting he is not the real villain of the piece, despite the murders that include those of Macduff ’ s young sons on stage. But the blood and ferocity was amply portrayed by Anna Pirozzi’s portrayal of Lady Macbeth . As Macbeth dies , I loved the pithy translation of his words in the subtitles: “I die hated by both God and man.”

This was a performance under the baton of Daniele Rustioni that did ample justice to Verdi ’ s brilliant distillation of Shakespeare ’ s play. It leaves us with the impression that the composer ’ s image of 11th-century Scotland is not so very different from some modern dictatorships.