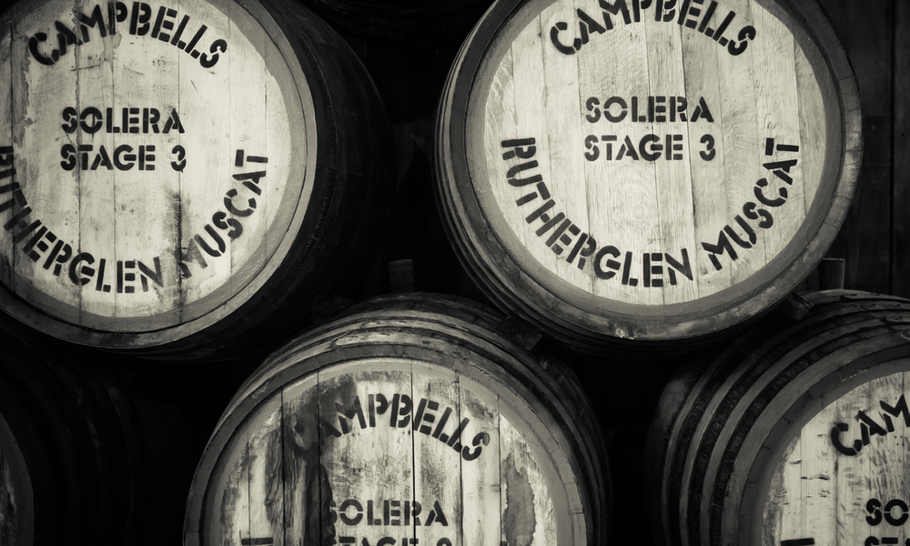 It is a long ago now, but I still remember Australian Rutherglen well. For a few days I seemed to be going from one old-fashioned Victorian town to the next. They all looked similar, a bit like sets from cowboy films, generally centring on a raw gothic church and a big pub (called a “hotel” – and initially doubling up as one) and some quaint old shops stretched out along a main street. It was as hot as hell that autumn and I bought an Akubra – not the famous rabbit-fur hat, but the straw version. I struggled to produce a rhyme about it: “The hat I lost in Ballarat/I found again in Rutherglen.” I can’t remember if I ever finished it. I still have the hat, but it is rarely aired. It has seen better days.

I certainly needed my hat in Rutherglen – a dusty little town about two hours drive from the Australian Alps. Rutherglen sprawls along the Murray River which here forms the boundary between Victoria and New South Wales. The terrain is red loam over red clay, with hills rising to around 185 metres. It has two prominent pubs: the Victoria and the Star Hotels are both fine examples of nineteenth century Australian architecture, with their cast-iron columns and filigree verandas.

Much I was tempted by a glass of ice-cold Cooper’s Ale, my business was with the wine companies housed in old warehouses with their corrugated iron roofs. Inside the buildings, casks were stacked high as in a bodega in Jerez in Southern Spain. It was like walking into an oven and up to half the wine was expected to evaporate to form the so-called ‘angels’ share’, concentrating the tastes of what remained in the casks.

In the summer months Rutherglen roasts with daytime temperatures averaging between 35 and 45 degrees celsius, and although good table wines are made there, it is ideally suited to fortified wines modelled on port, or even its famous liqueur muscat, which tastes like a cross between a dessert wine from Portuguese Setubal and a super-sweet Pedro Ximenez from Jerez. The proximity of the mountains means that the temperature drops by around twenty degrees at night, ensuring better aromatics, and much needed acidity. Growers agree that the cooler vintages are the best, but “cool” still means hot to you and me.

Like California, Rutherglen wines go back to the time of the Gold Rush, which occurred here in around 1850. The gold was soon gone but the land remained. They are among the original Australian wines from the time before “imperial” clarets, burgundys and sauternes. Fortified wines, like ports and sherries, have become less popular since the wine revolution of the 1970s but there is no denying that Australia makes some stunningly good ones.

Rutherglen liqueur muscat is made from the variety Muscat à petits grains rouges known locally as “brown muscat”. Grapes are picked once they start to “dimple”. The wine is allowed to ferment on its skins to 17 degrees alcohol by volume before an almost pure grape spirit is poured in to kill the yeast and terminate the process, leaving the wine fortified to eighteen per cent. The adding of grape spirit is supposed to take place as soon as the fermenting begins to give off the smell of Christmas pudding. Time and astute blending does the rest. There are around a score of wineries in Rutherglen. Fourteen of these make liqueur muscat, although only eight produce the full range of styles: Rutherglen, Classic, Grand and Rare.

Campbells Rutherglen Muscat is a five-year-old wine that smells strongly of demerara sugar and raisins. It is rich and creamy on the tongue with a lemony acidity and a long finish.

Chambers Rosewood Vineyard Old Vine Classic is the next step up. Seven years old, the wine was a bit more floral, but still characteristically raisiny. Some people detected the smell of Turkish Delight, or rosewater. It seemed fresher and less opulent than the first wine.

Stanton & Killeen Classic Rutherglen Muscat is another ‘Classic’ but in this instance twelve years old. It was aromatically more reticent than the others, fresher and spicier. Age had given it a better structure with plenty of demerara sugar on the palate and a nuance of rose petals. The taste was persistent, haunting even.

Pfeiffer is the new kid on the Rutherglen block, having only opened in 1984, albeit on the site of companies that went back to the gold rush time. Their 18-year-old Grand Rutherglen Muscat (£53) was possibly my favourite wine in the tasting. There was a whiff of dried roses and perhaps a bit of eucalyptus too. The wine was intense, finishing with the taste of dried apricots.

Finally, from possibly the oldest house in the town, Morris of Rutherglen, was Old Premium Rare Rutherglen Muscat. At over 20 years old this was soft, rich and luscious with a smell of demerara sugar that reminded me of some wonderful old rum. It brought back memories of childhood butterscotch too in those brittle bars made by the great Callard & Bowser. There was a faint taste of black fruits in the middle palate. This is a truly lovely wine and the perfect foil to a slice of Christmas cake.