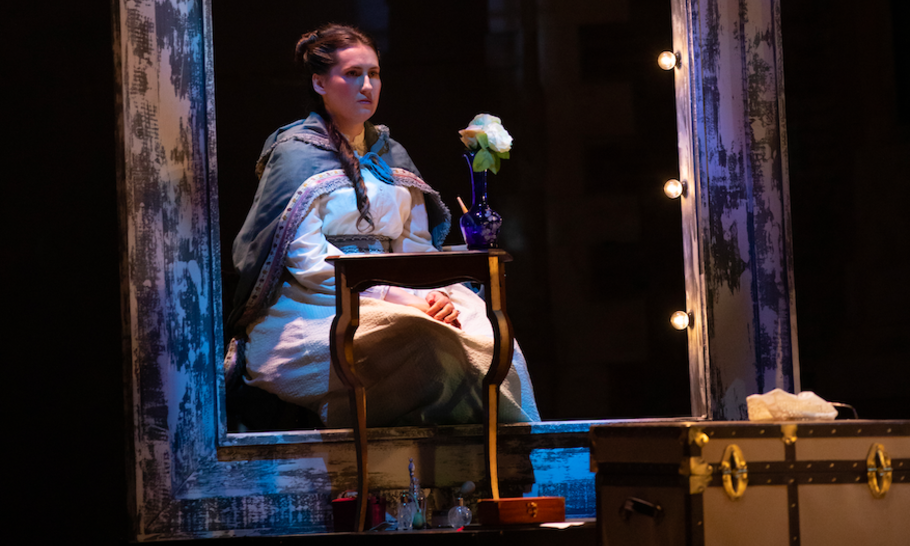 Louisa May Alcott ’ s pioneering novel Little Women is now an opera. The American composer Mark Adamo has created both music and libretto for this story of four sisters in New England during the American civil-war era. It ’ s a remarkable achievement that enjoyed immediate success at its premiere in 1998 at Houston Grand Opera. Since then it has been staged in well over thirty different productions, including established American houses such as Minnesota Opera, and summer festivals including Glimmerglass in upstate New York.

High time for a UK premiere therefore, and congratulations to Opera Holland Park for putting it on — with the composer present.

At least half the audience probably knew the story already, so director Ella Marchment took liberties with some extra allusions. Before the orchestra struck up, the open stage (Opera Holland Park has no stage curtain) showed four young women in picturesque poses. It turned out however that these were not the sisters, and we never quite knew what they represented. The real sisters do not appear together at the start, only Jo — based on the author herself — is on stage, a challenging role for the young Charlotte Badham. She and the other three sisters, Meg (Kitty Whately), Beth (Harriet Eyley) and Amy (Elizabeth Karani) worked well together and the quartet at the end was beautifully sung. Ms Badham understandably suffered from nerves at the start, coming over as too intemperate and arrogant, but although her voice steadied well later, it did not seem quite strong enough for the principal role.

Designs by Madeleine Boyd used the same sets as the double bill of verismo operas Margot la Rouge and Le Villi a day earlier, a clever idea that worked very well as it featured the interior of a house made of wooden planks. A blackboard on stage was updated to show us where we were, which was helpful since Adamo ’ s excellent libretto begins with a prologue set in 1870, followed by flashbacks starting in August three years earlier.

The intricacies of the story were brought to life by a large cast of singers. As well as the four sisters, Lucy Schaufer as the wealthy Aunt March was terrific, and the March parents, Victoria Simmonds and Nicholas Garrett, played their roles with genuine sincerity. So too did tenor Frederick Jones as Laurie, the young man who asks Jo to marry him and is rebuffed. In the meantime the baritone Harry Thatcher gave a strong account of John Brooke, whom the eldest sister Meg gladly accepts as her husband, and the bass-baritone Benson Wilson came over strongly as Professor Bhaer, who convinces Jo there is more to art than the sensation stories she has written. Conducting by Sian Edwards showed sensitivity to the singers and brought out the tender qualities of the music, particularly in Act 2.

Adamo has inserted all sorts of little extras in his libretto, and I loved the bit in the closing quartet when the sisters sing “ Our perfect summer came to pass; it couldn ’ t come to stay”. At the very end, as childhood memories fade, Professor Bhaer reappears to ask Jo if now is a good moment, and she replies: “ Now is all there is.”