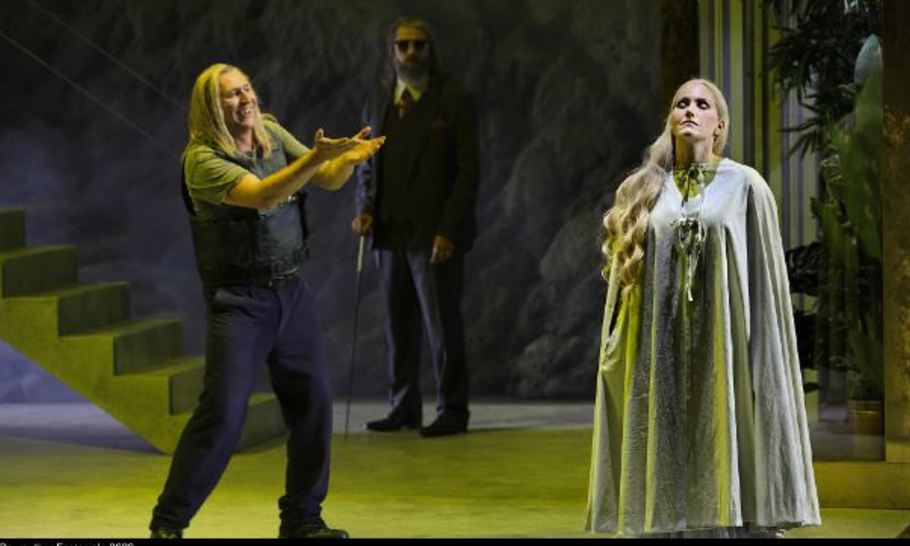 The best place to see Wagner’s Ring is Bayreuth, in the Festspielhaus that the composer built for the purpose and opened in 1876. But not if you want a traditional production, nor perhaps if you want to avoid mishaps.

In Act II of Die Walküre, the second opera of the cycle where we transition from the world of gods to the world of humans, Wotan sat on chair and it collapsed. The king of the gods fell backwards, but in well established theatrical tradition carried on as if nothing had happened. He had to be replaced for Act III.

Bayreuth specialises in clever, sometimes too-clever-by-half, productions that place the master’s operas in a new context. But at least they try for coherence, unlike some other venues which have assigned each of the four operas to a different director. Earlier this year Stuttgart went even further by entrusting each of the three acts of Walküre to three different production teams. Madness — and this new production has plenty of it, whether a good or bad thing depends on your attitude. Cheers mixed with extensive booing greeted the first opera Rheingold, and a thunderous boo followed the second, Walküre, immediately the curtain closed. Bayreuth is famous for such disapproval.

Wagner’s original conception embraces a three-fold division of the world: the Nibelungs beneath the world, the giants on the surface, and the gods in the cloudy heights; all this is made explicit in the third opera Siegfried. In this new production by Valentin Schwarz, a director barely into his thirties, these distinctions are markedly absent.

In film footage at the start we see twin babies in the womb. These are Wotan and Alberich (chief of the Nibelungs). On stage we see a wealthy, dysfunctional and extended family, for whom the giants are architects for a massive new home (Valhalla), and Loge the family lawyer. An air of sleaze permeates everything, with Wotan in Rheingold waving a threatening pistol. The sword he (as Wälse) has promised his extra-marital son Siegmund is a pistol, and when the son and his twin sister Sieglinde meet again after a long separation, the stage becomes their two bedrooms with them as children.

Sieglinde in the meantime is married to Hunding, and Wotan’s wife Fricka persuades her husband to abandon his support for Siegmund after his carnal union with Sieglinde. Hunding is present for this conversation before Wotan shoots Siegmund, rather than simply breaking his spear and allowing Hunding to deal the fatal blow. As Wotan commands the wretched Hunding to go and kneel before Fricka he usually intones, “Geh! Geh!”, sweeping his arm across on the second “Geh” and killing him outright. Here there was only one “Geh!” and Hunding departed, a clear indication he may return in some form.

Quite how the various changes and allusions resolve themselves remains to be seen. In Rheingold, where the Rhine is a paddling pool and the Rhine maidens nannies, who are the schoolgirls under the care of Alberich’s brother Mime — embryonic Valkyries? The Valkyries themselves appear in evening clothes undergoing beauty treatments, but who was in the coffin at the start of Walküre? Why was Sieglinde already pregnant? In that special moment where Brünnhilde informs her that she carries a future hero, and she asks to be saved, she already holds a baby. Whose? And why does Wotan apparently try to rape her? There are undoubtedly allusions to sexual abuse, including against a feral, young Hagen, but much remains obscure, and the confusion and annoyance among the audience, as absurdities piled up, explains the hugely negative reaction.

Yet the orchestra under the direction of Cornelius Meister provided unhurried yet compelling performances of the first two operas. Siegmund (Klaus Florian Vogt) and Sieglinde (Lise Davidsen) were outstanding, Georg Zeppenfeld a bold, even noble Hunding, Irene Theorin a disappointing Brünnhilde, and Michael Kupfer-Radecky replaced the injured Thomasz Konieczny as Wotan in Act III of Walküre. In Rheingold the best singing by far was the Alberich of Olafur Sigurdarson. We now await whatever this young director will bring to the final parts of the tetralogy, Siegfried and Götterdämmerung.