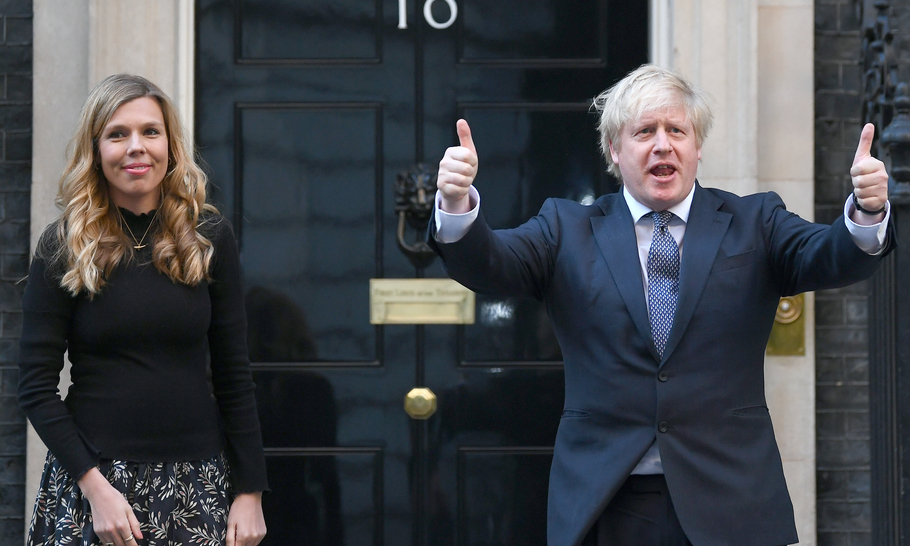 The wedding of Boris Johnson and Carrie Symonds on Saturday has occasioned ribaldry, resentment and rejoicing in equal measure. This is only to be expected. For a Prime Minister to spring such a surprise while in office is more or less unheard of — and Lord Liverpool, the only precedent two centuries ago, was, though already a widower, a much younger man. The photograph of the happy couple in the garden of 10 Downing Street led Adrian Hilton to compare them to Titania and Bottom in A Midsummer Night’s Dream: “And I will purge thy mortal grossness so / That thou shalt like an airy spirit go.” Certainly the bride looked ravishing, while Boris looked, well, besotted. It would be churlish not to smile.

The age difference is of course considerable, but at 33 Carrie is quite old enough to know what — and whom — she is taking on. There is also the small matter of Wilfred, their son, who is now a strapping little toddler.  To be the first unmarried partner to live at Number Ten and to give birth while doing so is no cause for shame; but Carrie might rather be known simply as the first Mrs Johnson (as the first of his spouses to take his name).

Inevitably, disapproval has focused on the fact that the bridegroom has been twice married — and divorced— before. How, the carpers wanted to know, did the old rogue manage to wangle a third wedding in a cathedral — and a Catholic one, too? The official explanation from Westminster Cathedral was deliberately unhelpful, merely noting that all canonical and administrative procedures under Church and civil law had been followed, as indeed they had. Even a parish priest, however, was quoted grumbling about one rule for the rich and another for the poor. Surely the Catholic Church does not even recognise divorce, let alone allow divorced people to remarry in church?

No excuse is too feeble for those who revile the Church of Rome to accuse her of hypocrisy. But Papists are used to being the butt of every kind of ridicule and worse. Like Carrie and Boris, I was baptised a Catholic. Once that sacrament has been administered, you are marked for life by the sign of the Cross; and the recipient — even if he was confirmed in another denomination — will always be a Catholic. In the eyes of the Church, Boris’s previous marriages, the second of which lasted 27 years and produced four children, “lacked canonical form”. This is not a trivial point: for Catholics matrimony is a sacrament, but only if it is entered into with the blessing of and according to the canons of the Church. Failure to observe the latter can be grounds for annulment. These marriages did not involve the Church and were never “convalidated” by her. They cannot therefore be annulled and were no obstacle to Saturday’s ceremony, which required no special permission from Cardinal Vincent Nichols, let alone from the Vatican. The Church is entitled, indeed obliged, by its own law to treat this marriage as the first valid one for both parties.

Many will feel that the Catholic Church is thereby turning a blind eye, not only to the Prime Minister’s previous wives and children, but to his scandalous past. Like the prodigal son, he has been welcomed back into communion with a Church that is there not merely for saints but for sinners. Just as elder brother resented the slaughter of the fatted calf and, even more, his father’s joy, so many will resent yet another wiping clean of the Johnsonian slate. Once again, Boris is having his cake and eating it, they will say. So be it. Jesus also forgave the woman accused of adultery. And he told the accusers (evidently male): “He that is without sin among you, let him cast the first stone at her.”

Leaving aside politics and theology, or indeed political theology (which is neither), we come to the important matter of the bridal gown. This has divided opinion almost as much as the wedding itself. Few would dispute that this simple “bohemian” design suited Carrie to perfection. Yet envy once again reared its ugly head. Didn’t the wedding dress cost £2,870? Such extravagance in the middle of a pandemic had plenty of people tut-tutting. But then it emerged that the gown in question was available for hire at just £45 — and had indeed been rented that weekend. Something borrowed? Many forget that Carrie is also a political animal.

The great mystery, though, is how she could show such good taste in her wedding dress (by the Greek designer Christos Costarellos), yet so hopelessly misjudge her choice of interior design (the Soane Britain guru Lulu Lytle). We can only speculate that Mrs Johnson has learnt from her mistake over the Downing Street renovation saga and is determined to shed the spiteful sobriquet “Carrie Antoinette” with which she was saddled by enemies. The modest celebration and postponement of the honeymoon are also signs that she intends to stay in harmony with the public opinion.

The knot is tied, the guests have departed and the newlyweds are, like the rest of us, back at work. For the first time in history, a Catholic family now officially resides in 10 Downing Street. (Tony Blair was only received into the Church after leaving office.) The bigots and prudes will gossip, but the great British public is relaxed and may even see it as a modest cause for celebration. Quite a few people will have been mildly amused by the way the couple stole a (wedding) march on the media. Others will hope that Carrie will keep her husband’s feet firmly on the ground. Whatever Dominic Cummings may say, her influence is more likely to be beneficial than harmful. Mr and Mrs Johnson deserve our congratulations, not our brickbats.