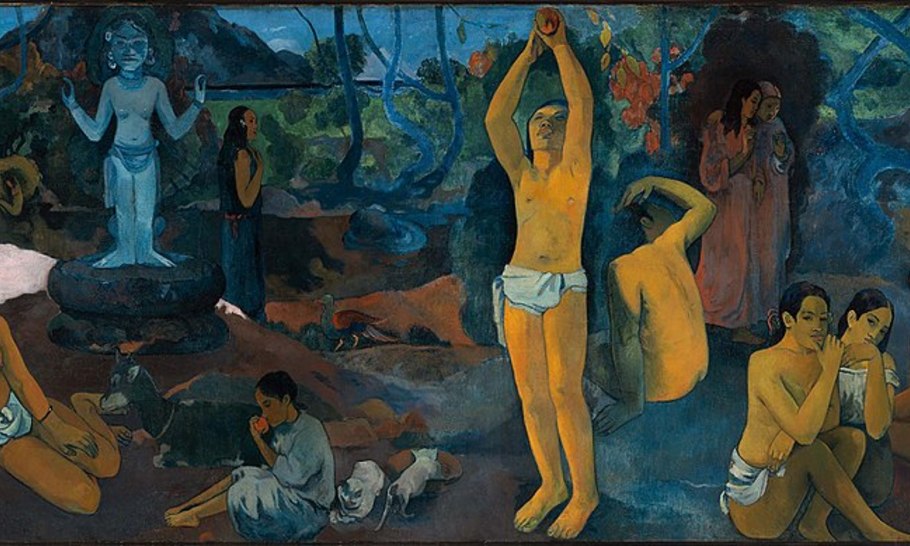 Paul Gauguin’s masterpiece “Where Do We Come From? What Are We? Where Are We Going?” is a compassionate painting that can soothe us during the current plague. It offers an escape from Western materialism and alienation to a gentler and more attractive world, an innocent paradise with a vital sense of kinship, culture and religion. The cyclical progression of the stages of life, with the spooky blue idol representing the hope of “beyond,” radiates equanimity and peace. Gauguin created a sympathetic alternative to the spiritual emptiness and mechanical squalor of his world, in which railroads and factories had encroached on many landscapes painted by the Impressionists. In this painting Gauguin sought to challenge the idea of progress (and its justification of colonialism) and reject civilization and its discontents. He wanted to embrace the pleasures of primitivism and move from despair to desire.

The literary legend of the south seas as an exotic and romantic paradise was created by Herman Melville, Pierre Loti and Robert Louis Stevenson. Gauguin set out to discover this exotic world. He explained that he abandoned his Danish family and left Europe to find an elemental simplicity. Referring to “savages” in a positive sense, he wrote that he sailed to Polynesia to “immerse myself in virgin nature, see no one but savages, live their life, with no other thought in mind but to render, the way a child would, the concepts formed in my brain and to do this with the aid of nothing but the primitive means of art, the only means that are good and true.”

Before his sixty-nine-day voyage to Tahiti in March 1891 Gauguin had already traveled to Peru, Brazil, Panama and Martinique. He lived in Tahiti for two years, returned to France from 1893 to 1895, went back to Tahiti from 1895 to 1901, and then moved to the even more remote Marquesas, 740 miles to the northeast. His appealing art idealised languid, sensual, golden-skinned people in a lush landscape. In reality, his life in the Pacific Islands was grim, and he died in 1903, aged fifty-four, from an overdose of morphine.

As soon as he arrived Gauguin realized that Tahiti, with its sullen people and steamy landscape, was a far cry from his dreams of Eden. Devastating smallpox and influenza, sexually transmitted diseases, alcoholism and opium addiction ravaged the area. By 1897, while experiencing fits of dizziness and attacks of fever, Gauguin described himself as having “No more brain, no more work, and without hope.” He also antagonised the powerful French authorities by attacking the corruption of the Catholic Church and the missionaries’ hypocritical attempt to condemn the Tahitians’ sexual behavior.

In his last terrible years he suffered from chronic eczema, ulcerated sores, migraines and syphilis. Snake oil and morphine could not relieve the pain, and his thirteen-year-old mistress could no longer console him. In 1922 D. H. Lawrence, passing through Tahiti and agreeing with Gauguin, exclaimed that “Papeete is a poor sort of place… I never want to stay in the tropics. There is a sort of sickliness about them, smell of cocoa-nut oil and sort of palm-tree, reptile nausea.”

In January 1897, as he began to paint, Gauguin learned that his favorite daughter, Aline, had died of pneumonia in Copenhagen. He then cursed the cruel God that allowed her to die: “I cry out, ‘God Almighty, if you exist, I accuse you of injustice and spitefulness.’ Yes, on learning of my poor Aline’s death, I doubted everything.” He decided to commit suicide with arsenic, but would first bequeath to posterity his spiritual and artistic testament. Gauguin’s huge masterpiece “Where Do We Come From…? (1897-98) measures about 5 feet by 12, and it was acquired by the Boston Museum of Fine Arts for $80,000 in 1936. Somerset Maugham’s novel about Gauguin, The Moon and Sixpence (1919), describes the painting with suggestive vagueness, as “indescribably wonderful and mysterious… tremendous, sensual, passionate.”

The arcane symbolism of the picture is difficult to understand. But Gauguin came closest to explaining the meaning of the dozen figures arranged in four groups with the sea and the island of Moorea in the background. Looking from right to left, “In the bottom right, a sleeping baby, then three seated women. Two figures dressed in purple confide their thoughts to one another; another figure, seated, and deliberately outsized despite the perspective, raises one arm in the air and looks with astonishment at these two people who dare to think of their destiny. A figure in the middle picks fruit. Two cats near a child. A white she-goat. The idol, both its arms mysteriously and rhythmically uplifted, seems to point to the next world. The seated figure leaning on her right hand seems to be listening to the idol; and finally an old woman close to death seems to accept, to be resigned to her fate. At her feet, a strange white bird holding a lizard in its claw [illogically] represents the futility of vain words. All this takes place by the edge of a stream in the woods. In the background, the sea, then the mountains of the neighboring island.” The anthropologist Bengt Danielsson explained that the Tahitians’ “most striking characteristic is their extraordinary stoicism, not to say indifference, in the face of death.” Gauguin portrayed death as part of the natural cycle of life.

In his attack on modern science, which he contrasts to pristine nature (and which has so far failed to cure the current viral plague), Gauguin added: “Two sinister figures, shrouded in garments of sombre [purplish red] color, recording near the tree of science their note of anguish caused by this science itself, in comparison with the simple beings in a virgin nature, which might be the human idea of paradise, allowing everybody the happiness of living.” The last optimistic phrase foreshadows Henri Matisse’s joyous “Le Bonheur de Vivre” (1905).

Gauguin may well have intended the huge panel to remain tantalisingly and enigmatically obscure. As Robert Frost wrote: “We dance round in a ring and suppose, / But the Secret sits in the middle and knows.” I believe, however, that the twelve meditative figures — recumbent, sitting and standing, accompanied by a goose, an exotic bird, a dog, two cats and a goat — represent the ages of man from infancy to senescence. The landscape is harmonious and paradisiacal, with sinuous fruit trees, a lush garden and, in the background, a green meadow, dark mountain, calm azure sea and nearly cloudless sky. The beneficent blue pagan idol is an alter ego of the central woman. She is reaching for but has not yet picked the prelapsarian mango fruit that symbolises bounty rather than sin. The mysterious figures and oneiric quality of the painting suggest man’s desperate attempt to sustain this precarious Eden against the encroaching forces of modern life.

In the upper left corner Gauguin painted the title, which asks three existential questions about the origin of mankind, its present condition and its uncertain future: “Where Do We Come From? What Are We? Where Are We Going?” The scientific answers, which Gauguin rejects, are: We’ve evolved from apes, as in Charles Darwin’s On the Origin of Species (1859); the human body is composed of six chemical elements and 60 per cent of it is water; no one can possibly know our postmortem destiny. The religious answers, which he accepts, are: we come from God; we live a transient life on earth; we return to the Deity, whence we came. The last question echoes the promise of fidelity in Ruth 1:16: “whither thou goest, I will go; and where thou lodgest, I will lodge; thy people shall be my people, and thy God my God.” Ruth’s promise foreshadows Gauguin’s sworn fidelity to the Tahitian people and reverence for their culture.

“Bathers” (1902), a late painting from the Marquesan period, is related to his masterpiece. The vivid, brilliantly colored idyllic setting also suggests nostalgia for a soon-to-be-lost paradise and provides a vivid contrast to the somber, symbolic figures in “Where Do We Come From?” The picture recedes from the shimmering pink foreground to a sandy beach, turbulent blue and white-capped ocean waves, and a distant sky streaked with wispy clouds. In the background the image of two men paddling a bouncing canoe in the rough surf is bisected by three bare and curving tree trunks. In the foreground, dotted with white cottony flowers that echo the breaking waves, Gauguin portrays a broad-shouldered, bare chested, bronze-colored, long-haired, rather androgynous man. With hands on his hips, he seems ready to take off his white and partly colored sarong (which echoes the red of the flowering tree behind him) and dive into the ocean. His naked brown male child looks up on his right. A white she-goat and two adults — one with a mask-like face and yellow sarong — appear on his left. This picture, once the prized possession of Errol Flynn, is now privately owned and difficult to see, cloistered by Stephen Wynn in his Las Vegas casino.

Gauguin believed that “art is sacred; that it is worth every sacrifice, beginning with family life; and that the artist must be concerned with the reactions of only a few rare individuals.” His retrospective at the 1906 Salon d’Automne, three years after his death, brought the success and fame that had eluded him in his lifetime. He accurately predicted that he’d be transfigured, that his life might eclipse his work and that “a time will come when they will believe me to be a myth.”