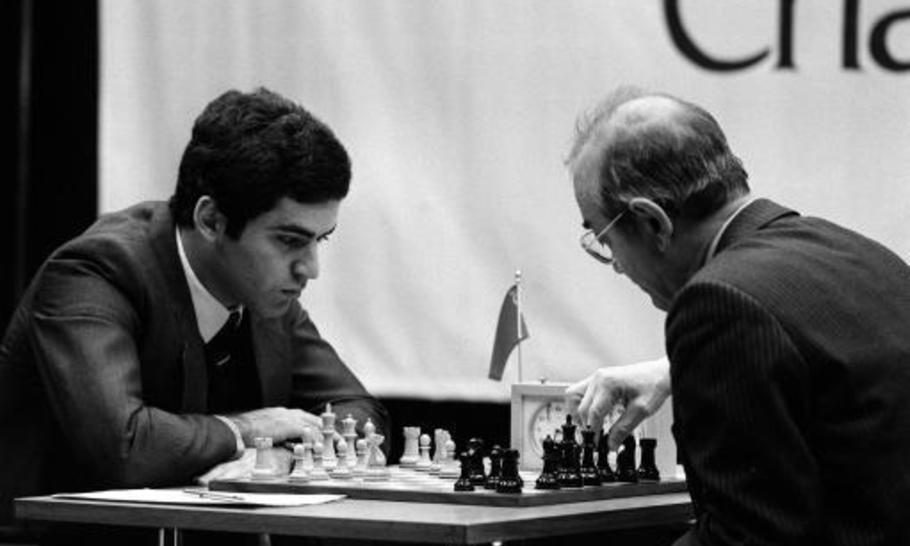 Modern elite chess Grandmasters tend to be pleasant young people with impeccable manners, not accustomed to excesses of alcohol, tobacco or other substances, devoid of any extreme political opinions, and certainly quite free from feuds or bitterness of any sort. Many, such as Hikaru Nakamura and Magnus Carlsen, also double as entrepreneurs or company directors, as comfortable on the bourse, as they are at the board.

It was not always thus, as I am reminded by rediscovering a Times leading article of 38 years ago. Entitled “Chessboard Diplomacy” it brought back to me the Cold War battles of the day, which inevitably coloured the international conduct of chess, the archetypal Soviet game.

Two problems bedevilled the chess universe in the early to mid-1980s: one was the Soviet boycott against the defector, and world number two, Viktor Korchnoi. The other was the seeming reluctance of the USSR Chess Federation to permit the rising genius, Garry Kasparov, to qualify for a title challenge against the reigning champion, Anatoly Karpov.

The anti-Korchnoi boycott meant that any potential organiser or sponsor of a top tournament could either opt to invite Korchnoi, or Soviet Grandmasters, but not both. There was no middle way, and it was certainly impossible to have Karpov and Korchnoi competing together in your event. The two great K’s followed their own separate paths, like two hostile circling planets, whose orbits can never meet. The sole exception would be any competition authorised by the World Chess Federation, FIDE itself, such as Olympiads or the World Championship cycle, where, in theory at least, no one could be excluded or discriminated against, on the basis of race, nationality, political opinion, gender or creed. Though the regnant FIDE President, Florencio Campomanes, even succeeded on occasion in first stifling and then subverting those stipulations.

The Soviet reluctance to support the budding genius Kasparov was accidentally revealed by a chance remark of one KGB functionary, overheard to say: “We have one world champion, so why should we need another one?” In Kasparov’s case, one from the perimeters of the Soviet imperium, half-Jewish and not known for his enthusiastic devotion to the doctrines of Marx and Lenin.

The global chess fraternity had already suffered a severe blow by the complete withdrawal from chess of the charismatic, brilliant yet mercurial champion, Bobby Fischer. Fischer crushed Boris Spassky in the match of the century at Reykjavik in 1972, but then shattered the dreams of his millions of admirers by refusing to play one single game as Champion, and finally forfeiting the Championship, without play, to Karpov in 1975.

Fischer had driven chess popularity to heights, not to be seen again until the screening of The Queen’s Gambit Netflix series last year, but a corresponding downturn followed his decision to give the title away to Karpov, his Russian rival. My opinion at the time was that chess could hardly survive as a thrilling international spectacle, if we were to lose two chess geniuses in the space of a mere eight years, one by eccentric personal whim, the other through the Machiavellian machinations of obstructive and hostile bureaucracy.

In 1983, acting in my capacity as the official representative to FIDE of the British Chess Federation (BCF), I resolved to cut the Gordian Knot, terminate the anti-Korchnoi boycott and sever the bureaucratic blockade on the hitherto meteoric trajectory of the young Garry Kasparov. The ultimate goal would be to stage a World Chess Championship in the UK, something not seen since the days when Wilhelm Steinitz defeated Adolph Anderssen in London 1866. First, though, the boycott had to be lifted and the qualifying cycle to challenge Karpov had to be completed.

The key to the strategy was the World Championship qualifying match between Korchnoi and Kasparov to be held during 1983. Scheduled for Pasadena, USA, the match ended in a forfeit victory for Korchnoi, when the USSR Chess Federation simply pulled the plug on Kasparov’s participation. Instead of stopping Kasparov’s rise in its tracks, I saw this as a golden opportunity. At the annual FIDE Congress in Manila, which followed close on the default, I announced (after some careful behind the scenes preparation) to the forum of global delegates that the UK would re-stage the aborted qualifier between Korchnoi and Kasparov, on the condition that the USSR dropped its boycott of Korchnoi. The sweet rationality of this proposition achieved such overwhelming support from the assembled great and good of the planetary chess fraternity, that no one could disagree, not even the sons of Lenin, from the otherwise recalcitrant Soviet Chess Federation.

So many times during the fight to secure this stellar match for the UK, I came across the objection, “it’s impossible“, “can’t be done in the time“, and so on. To be fair, this was not a wholly unreasonable or untenable point of view.

To give an indication of the urgency of our truncated timetable: on 16 October, 1983, just after my return to London from the Manila FIDE Congress, I had no particular sponsor in mind at all. Yet on 21 November, Korchnoi and Kasparov sat down to play their first game in London. One potential stumbling block was the venue. When Stewart Reuben, the BCF’s Congress Director, rang the London Convention Advisory Bureau for help in locating a playing hall in November, he was greeted with a jovial comment: “Of course you do mean November 1984.“

The problem was solved in an original way. Dominic Lawson inserted a piece on the forthcoming match in the “Men and Matters” column of the Financial Times, ending on a thinly veiled plea for someone to volunteer a venue. This succeeded brilliantly: the Great Eastern Hotel spotted a marvellous opportunity for their vacant Banqueting Hall. Thus we were introduced to the Great Eastern Hotel and its General Manager, Arnot Wilson, who were to be our hosts for the duration of the contest. Dominic was also instrumental in identifying a much-needed sponsor, in the shape of Acorn Computers, who reacted with admirable alacrity to the urgent exigencies of our all too brief calendar.

Few chess events in the UK can have received the advance fanfare achieved by this FIDÉ semi-final: furious Soviet diplomatic activity, a Times newspaper leader and finally the opening reception at 11 Downing Street (for the benefit of foreign readers, the official residence of the Chancellor of the Exchequer, the British Finance Minister). To cap it all the BBC succeeded on putting on three TV programmes devoted to the match, at very short notice indeed.

From the Times leader I now summarise various conclusions:

“It is rare for negotiations between the West and Russia to end in agreement, with a crisis resolved, everyone behaving reasonably and sweetness and light spread around. But this has happened in the chess world. What is more, Britons can take pride in the leading role their representatives played.

A way out of the impasse became visible because of an initiative by the players themselves. Korchnoi and Kasparov happened to meet in Yugoslavia in August and they addressed a joint letter to the International Chess Federation saying they wanted to play their match rather than have a result by default. There was also intense diplomatic activity with England’s representative, Raymond Keene, travelling to Moscow and drafting compromise proposals.”

I remember, in particular, my subsequent negotiations in Manila with the Soviet cosmonaut and President of the USSR Chess Federation, Vitaly Sebastianov, all taking place in the extensive bar of the Philippine Plaza Hotel, over cocktails served in the Ammonite shaped shells of the pearly Nautilus.

The leading article continued: “Things came to a head at the annual meeting of the International Federation in Manila on October 1. There peace broke out on all sides. The Russians ceased their criticism of Mr Campomanes, Korchnoi softened his demand that the Russians apologise and cease to boycott tournaments in which he played, and Britain (thanks to about £80,000 from Acorn Computers) was able to offer a site and a reasonable prize fund.

Chess players are often tempted to think that some deep significance attaches to their efforts across the board. There is intense intellectual effort, a subtle and artistic marshalling of forces, the overthrow of kings, intrigue of queens. It is all confined to a game, even if the greatest. But there is a wider significance in the way the chess leaders have resolved their differences in the negotiating chamber. Political leaders, in the world where blood flows when a pawn is taken, could learn a lesson.”

And the lesson I took to heart from this entire roller coaster experience? At Trinity College Cambridge I made a particular study of the German polymath and genius, Johann Wolfgang von Goethe. Above all I fell in love with his epic masterwork Faust. In 1835 the Irish poet, John Anster, translated one passage, somewhat freely, in the following exhortatory terms:

“Lose this day loitering—’twill be the same story
To-morrow–and the next more dilatory;
Then indecision brings its own delays,
And days are lost lamenting o’er lost days.
Are you in earnest? seize this very minute–
What you can do, or dream you can, begin it,
Boldness has genius, power, and magic in it,
Only engage, and then the mind grows heated—
Begin it, and the work will be completed!”

This week’s game is from the 1983 match between Garry Kasparov and Viktor Korchnoi. Although losing the first game, Kasparov eventually won convincingly against Korchnoi, going on, as we have seen from recent columns, to survive match cancellation against Karpov in his first challenge and ultimately take the World Title in 1985.