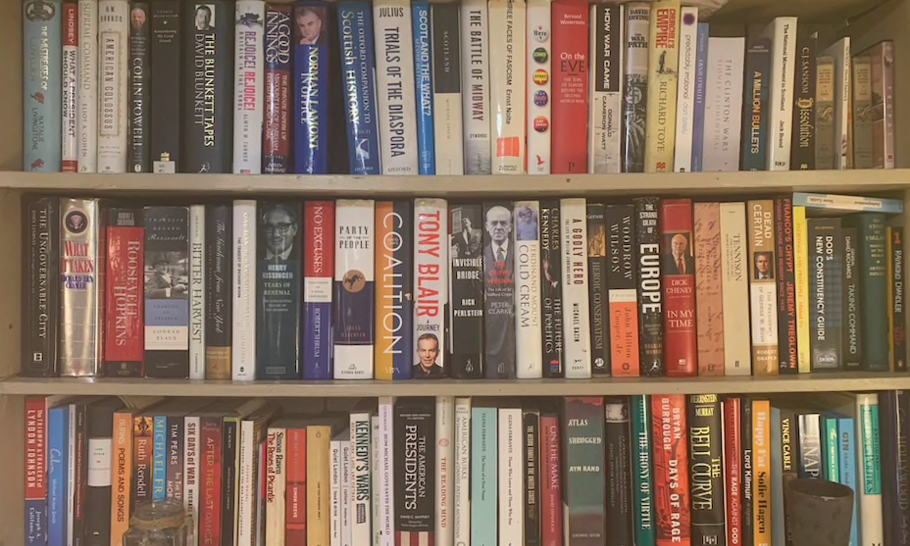 Why does Michael Gove own a book by the Holocaust denier David Irving? This was the question, posed by the Guardian columnist Owen Jones, that incited a day of rage on Twitter, directed at the Chancellor of the Duchy of Lancaster, who had inadvertently revealed the presence of Irving’s The War Path in his library (pictured above) by broadcasting from self-isolation.

It speaks volumes about the cultural assumptions of our time that such trivia should become talking points, but a large body of opinion on the Left has never forgiven Gove for the reforms he introduced as Education Secretary. Such is the influence of Jones, one of Jeremy Corbyn’s staunchest allies, that other papers (though not his own) have run news stories about the row.

Indeed, there is something about Gove that attracts opprobrium from other quarters with no ideological axe to grind. A few weeks ago, for instance, Piers Morgan accused the minister of hypocrisy because, at a time when many NHS staff were unable to get tests for Covid-19, his daughter Beatrice was tested so that her father could return to work. Downing Street came to Gove’s defence, pointing out that his role in combating coronavirus fully justified the decision by Chris Whitty, the Chief Medical Officer, to authorise the test. This time, the Government machine has not been mobilised on Gove’s behalf; quite rightly, the contents of his bookcase are not deemed to be a matter of state. Indeed, they are not obviously anybody else’s business. But Gove is a former journalist, a poacher turned gamekeeper. As such, he might as well have a target on his back. Hunting the Gove is a blood sport that pundits of all political persuasions can pursue.

The Jones tweet reads as follows: “Why does Michael Gove and his wife own a copy of a book by David Irving, one of the most notorious Holocaust deniers on earth.” Leaving aside the execrable grammar and punctuation — Jones is no Orwell, whatever his fans may think — what strikes one about this denunciation is the author’s deployment of guilt by association. Gove’s wife, Sarah Vine, is also a newspaper columnist. Like Caesar’s wife she must be above suspicion, but Ms Vine does not rate a name check. Just as Gove is presumed guilty by association with Irving, so “his wife” is guilty by association with her husband.

If Jones thought that he would get away with this, he was mistaken. While Michael Gove has so far chosen to ignore the Irving smear, Sarah Vine took up the cudgels against Jones. She tweeted more pictures of bookshelves, while defending intellectual freedom. This opened new fronts, inviting more hostility, notably from Ash Sarkar, voice of Novara Media and darling of the BBC. She claimed that the civil liberties of Muslim students had been curtailed by the Prevent programme, of which Gove has been a strong advocate. In fact, no books have been banned from university libraries by Prevent, whatever the unholy alliance of Marxists and Islamists may claim. Others had noted that the Gove family library also includes The Bell Curve, thereby associating the minister with one of the hate figures on the academic Left, Charles Murray, and his controversial views on race and intelligence.

But voices were also raised in Gove’s support. Sir Richard Evans, who had been an expert witness at the Irving-Lipstadt libel case, asked: “Why shouldn’t Michael Gove have a copy of a work by David Irving on his bookshelf?” The historian, a lifelong man of the Left, tweeted that in preparation for the trial he had read “a whole heap of books by David Irving”. He had opposed a campaign to remove these volumes from university libraries, where he had consulted them. He had never owned any copies, but “it would not have seemed right to burn them,” he added pointedly.

Stephen Pollard, the Editor of the Jewish Chronicle, was even bolder in his support for Gove. Having steeped himself in anti-Semitic literature during his successful campaign against Labour anti-Semites, he must, according to the logic of Owen Jones, have “a soft spot for it… because I’ve been reading it.” Pollard admitted to owning two books by Irving and one by Hitler himself plus — “and this is where it gets really bad” — the speeches of Jeremy Corbyn and John McDonnell. He even had a word of praise for the “excellent” Chavs by Owen Jones himself.

Pollard knows that Jones knows that in order to criticise anti-Semites it is a good idea to read them first. Gove, he observed, had done more for Holocaust education and the Jewish community than any politician except Gordon Brown. “It’s obvious why he would have read the work of a Holocaust denier.” As the JC editor whose scoop (the Chief Rabbi’s indictment of Corbyn) had a major impact on last year’s election campaign, Pollard was sceptical Jones’s purported concern about Holocaust denial at the heart of the Tory Government. Not only had the Chief Rabbi declared the then Labour leader “unfit for high office”, but one of his own MPs had called him a “racist anti-Semite”. “If Jones had his way, that same Jeremy Corbyn would be in Number Ten right now.”

What does this unedifying episode reveal? For Pollard, it shows that the hard Left’s “true ideology is hypocrisy”. For those who hate Gove anyway, his reading habits are simply more grist to their mill. Whatever one’s view of the matter, it cannot be a bad thing that at least some ministers are prepared to read and engage with views they demonstrably find abhorrent. We live in a society where free speech is, if not in danger, at least in question. On campus and beyond, self-censorship is common, tolerance less so. Michael Gove (and Sarah Vine) are to be commended, not condemned, for their intellectual curiosity; Owen Jones, not so much. He and his ilk are a menace. As the Roman satirist Juvenal might have said: who will guard the Guardianistas?