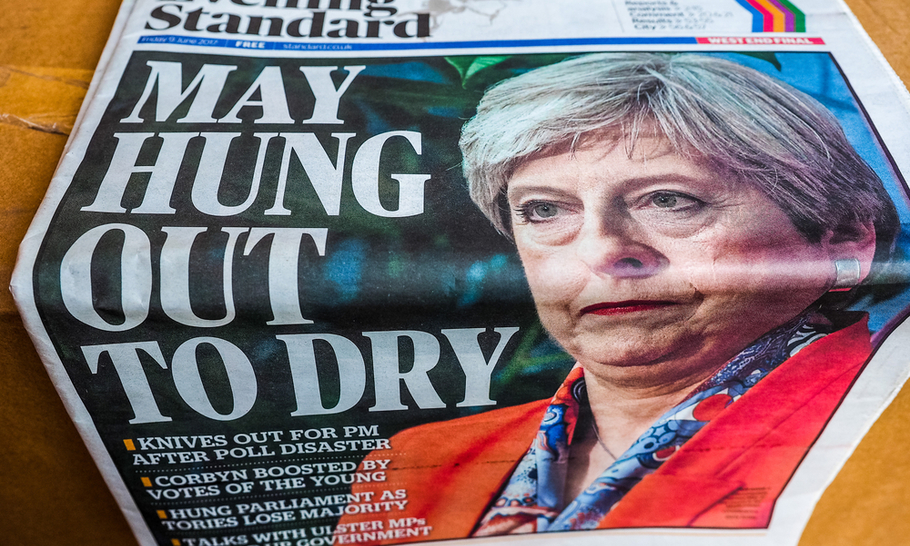 The day after the 2017 general election (Shutterstock)

We’re just over a week from polling day, and there are enough parallels with 2017 to bring Conservative activists out in a cold sweat.

Once again, the Tories entered the general election with the sort of polling lead which traditionally augurs a comfortable majority — perhaps even somewhere north of eighty seats. And once again Labour has, at least according to some pollsters, started to close the gap.

I didn’t encounter many Conservatives who bought into the idea of an easy landslide. One MP put it to me just before dissolution — and before Labour’s poll rebound — that the party would be doing well to get a slender majority on the scale of David Cameron’s 2015 result.

But just as it would have been unwise to take Theresa May’s team at their own estimation two years ago, so we should be careful about buying too heavily into Tory fatalism today. 2017 has cast a deep, deep shadow over the party’s collective psyche, but activists (and commentators) are just as prone as anyone else to fighting the last war.

Any attempt at an objective analysis of the state of the race is made even harder by the fact that we simply don’t know what evidence to trust.

For starters, as Matt Singh has explained elsewhere, there are broadly two groups of pollsters, each using different methods and producing either broader or narrower Conservative leads. If you’re not an expert — and I’m not — there really is little basis for making an informed judgment as to which set to believe.

We might then test the polls against feedback from activists on the streets in the various ground campaigns. But the last election has given cause for us to be wary of this, too — as several campaigners have pointed out, it was the feeling on the doorstep that led so many on both sides to think the polls were under-estimating May’s support.

If that weren’t complicated enough, then we need to try and read the tea-leaves of how tactical voting, and the varying relative fortunes of the parties, will affect the closing stages of the race.

For example, Labour has salvaged its poll rating by squeezing the Liberal Democrat vote — but some commentators have argued that the prospect of a government led by Jeremy Corbyn will actually help the Tories hold on to vital swing voters in Lib Dem-facing marginals. On the other hand, might Labour’s late-game pivot towards Leave voters give Jo Swinson more space for her pitch to Remainers?

Take all of this together and it becomes pretty obvious that any attempt to second-guess the outcome of the race at this stage is little more than haruspication, especially when YouGov’s MRP poll suggests that the main parties are neck-and-neck in so many battleground seats. The balance of the available evidence suggests a small-to-comfortable Conservative majority is the most likely outcome.

But if the party has lost ground over the campaign, there are a couple of factors that might have contributed to that.

The first is organisation. Not only does Labour have a much higher headline membership total than the Conservatives, but Momentum has proved adept at organising this enlarged base — and it has been preparing for this election for two years. The Tory machine is reportedly working better this time, but CCHQ are still working with a smaller, older pool of activists.

Moreover, it has also not yet found a proper replacement for the “flying column” tactics developed by Grant Shapps and employed to great effect as “Team 2015”. The post-election, scandal-riven collapse of that, and eventually the entire Conservative youth wing has given Momentum an even bigger head start than it would already have enjoyed.

Second, it might be that the Tories will come to regret just how safe they played it with their manifesto. The document — compiled on the basis of “If in doubt, take it out” — is an obvious response to 2017’s fatally over-ambitious offering.

But while Boris Johnson’s team have ensured they don’t accidentally stake their own voter coalition through the heart, it has left them struggling at times to win the fight for the news agenda against a very busy programme of Labour giveaways. Even on stories where the opposition gets monstered, it still means that “free broadband” or “massive rail discounts” are filtering out to low-information voters.

Despite all this, we should not lose sight of just how much CCHQ contributed to its own downfall at the last election, not just through the manifesto but via an incredibly ill-judged and over-aggressive deployment of campaign resources. May lost her majority by a few thousand votes in a clutch of key marginals.

Judging by the prime minister’s campaign itinerary, which is as cautious as his manifesto, they aren’t making that mistake again. Nor can possible Tory switchers think Corbyn is a safe no-hoper. In light of that, a repeat of the sort of implosion we saw at the last election would be truly extraordinary. Without one, Johnson is very probably returning to Downing Street.