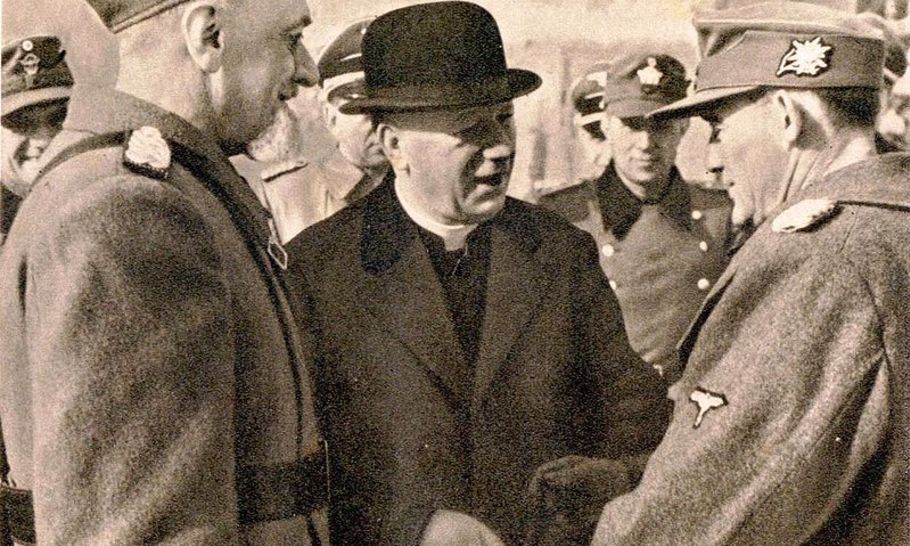 The International Holocaust Remembrance Alliance, the 34-country organisation founded by Sweden and now permanently based in Berlin, operates on the illusory assumption that the Holocaust is in the past, a matter of commemoration and education, not of current politics.

In reality, the Second World War has never ended, at least as far as several of the fragile democracies which emerged in central and eastern Europe in the 1990s are concerned. Continuing legal and cultural battles mean that the Nazi legacy plagues today’s public life. In country after country, there are ever-more strident efforts, in the words of the Serbian-American scholar Jelena Subotic, to hijack justice in dealing with the past. In particular, there is a growing, dangerous tendency to minimise Nazi crimes and to regard many Nazi collaborators with adulation as fervent patriots.

The latest embarrassment (to put it mildly) has emerged in Slovenia, the small country in the north of the former Yugoslavia.

It emerged in January that an unnamed grandchild of the country’s leading wartime pro-Nazi, the notoriously anti-Semitic General Leon Rupnik (pictured above left, with SS-General Erwin Rösener, right), had succeeded in persuading the country’s Supreme Court to annul the death sentence imposed on him in 1946. It did this on the ground that the military tribunal which tried him had been procedurally inadequate. In theory, the invalidated verdict could had led to a retrial in a lower court. There was a catch: the retrial would have required his presence in court, despite the fact he had been shot 73 years earlier.

A statement provided to me by the Slovenian Embassy in London stresses that such a retrospective annulment of sentence — the verdict of an independent judiciary — does not imply Rupnik’s “ rehabilitation ”. The position of the Slovenian government is that in collaboration with the Nazi occupier, Rupnik was “responsible for the deaths of many Slovenians, including many Jews”. This, it declares, “is a historically documented and proven fact, and court deliberation on the protection of legality, regardless of the substantial final decisions in concrete cases, does not deny its perverted nature.”

From the time of the German occupation of Slovenia in 1943, Rupnik promoted the domobranci or “ Home Guard ”. This force operated under the command of the SS, which was led in the region by three of Himmler’s top henchmen. With Rupnik in a succession of leading positions, the quisling forces helped flush out the remnants of the country’s small Jewish population from their hiding places so that they could be sent to Auschwitz. It also committed multiple atrocities against the Partisans, who were being supported by British and American agents.

That the Partisans were to take cruel revenge against them after the defeat of Hitler does not diminish the appalling wartime actions of the pro-Nazi Slovenians. Thousands of the surviving domobranci found their way after 1945 to places of refuge, such as Argentina, using “ ratlines ” similar to those which served Eichmann and Mengele. The Cold War meant that Allied secret services were very soon to regard their anti-Communism as more important than their predominantly fascist records.

Slovenia is among a number of countries where, in some circles, the fall of Soviet power has led to the glorification of a series of local armies which had worked with Hitler during the Second World War. In Lithuania and Latvia, former members of SS units, their families and supporters hold defiant annual marches. Memorial gatherings for pro-Nazi Croatian ustase have been held regularly in the face of protests both in Zagreb and in southern Austria. In 2019, the Catholic authorities in the Klagenfurt Diocese rejected a request by the Croatian Bishops’ Conference to hold Mass at the commemoration because previous ceremonies had become occasions for neo-Nazi displays. Having brutally murdered tens of thousands of Serbs, Jews and Gypsies during the war, many ustase members were themselves massacred by the victorious Slovene Partisans after VE day.

It is common knowledge both among credible academic and organisational observers that Holocaust revisionism, historical obfuscation and the glorification of Nazi collaborators is a trend in nearly every post-Communist country in Central and Eastern Europe. Local pro-Nazis are portrayed as victims or heroes. The darker parts of their history tend to be dismissed as “ Communist Soviet/Yugoslavian propaganda”.

Following their admission as members of the European Union, some formerly Communist countries in central and Eastern Europe have successfully pressed the EU to recognise Nazism and Communism as parallel evils by adopting 23 August — the anniversary of the Molotov-Ribbentrop Pact — as the day of remembrance of totalitarian regimes. What this involves in practice is minimisation of the Holocaust.

Their membership of the International Holocaust Remembrance Alliance provides an opportunity for the governments of some of these countries to signal their anti-Nazi virtue in the international arena, while at the same time supporting pro-Nazi commemorative lobbies at home.

Though it is by no means unique, the recent annulment of the charges of the 1946 Yugoslav military court against Rupnik could have wider ramification s. It may well be liable to appeal to the European Court of Human Rights in Strasbourg, if the Slovenian Constitutional Court declines to review and reverse the verdict of the country’s Supreme Court. That postwar military tribunals may not have been able to adhere fully to normal peacetime legal procedures is not in question. There nevertheless is no doubt — as the Slovenian government itself states — of Rupnik’s guilt. The evidence is overwhelming.

Rules of evidence needed to take account of war conditions, destruction of documents, changes of regime and prevailing turmoil if there was to be any chance of bringing war criminals to justice. The main Allied powers debated the appropriate rules as they prepared for the trials of major Nazi war criminals at Nuremberg. The outcome was the Nuremberg Charter, signed in London in August 1945. The appeal against the Rupnik verdict brought by two law professors at the University of Ljubljana (one of them himself a former justice of the Slovenian Constitutional Court) argues that the trial of Rupnik in 1946 was procedurally at least as robust as those then being held by the International Military Tribunal in Nuremberg.

The implication is that procedural technicality could be cited to undermine some or all of the Nuremberg verdicts too. In its judgement, the Slovenian Supreme Court argued that it was basing its decision not on the then-existing rules of the Yugoslav military court, but on the court’s failure to adhere to some of those rules. Equally, the procedures of the Slovenian legal authorities are themselves open to question. The descent into arguments sufficiently obscure as to challenge public international lawyers outside Slovenia, let alone members of the public, ought not deflect from the essence of the matter. This is the use of lawfare to rehabilitate major Nazi collaborators.

Where will this end?